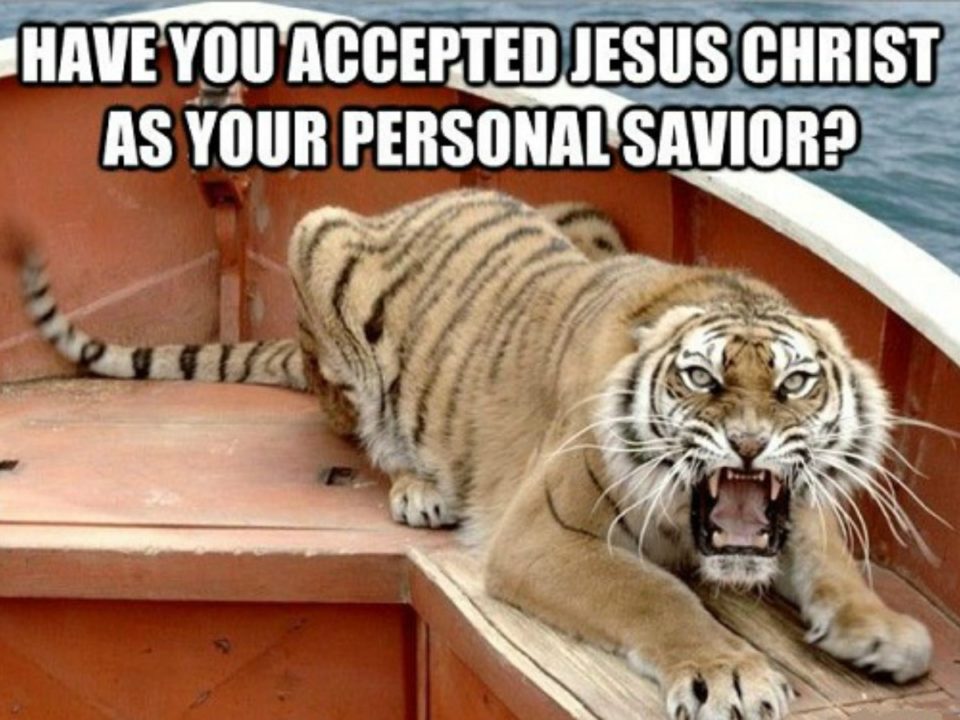 Here we are on year four of me actually watching all the shitty best picture nominations so you don’t have to.  And you know what? They are actually getting better, there was only really one movie that made me dry heave this year, and that was for mostly ideological reasons, so I’m going to go ahead and call this the best crop of best picture nominees in the last four years.  Of course, only two of them made it into my personal top ten films of the year, so the Oscars still have a ways to go.

Anyway, enough of that, let’s get on to damning the supposed 9 best films of the year with faint praise!

First, yes, this is a beautiful movie.  Bright, colorful, and with some really nice imagery with which to surround its excellently rendered CGI tiger.  But, unfortunately it’s all just window dressing on the cinematic experience of being stuck on an elevator with that creepy dude from the Unitarian church who is also into, like, Buddhism and stuff, while he spends the next two hours trying to explain to you how religions are all totally the same thing and are totally cool and stuff.

Seriously, the whole point (spoiler alert) of this movie seems to be to say that you should believe in God because it’s easier to lie to yourself rather than accept hard truths.  Well, first, duh, second, everyone involved in the making of this film, especially that patronizingly cloying reporter character that bookended the film, can fuck off for trying to drag humanity back into the dark ages of willful ignorance.

8 – Beasts of the Southern Wild

This also had some nice images of bayou squalor, but aside from a very strong performance from the main child actor, there was fuck all to back it up.  Obviously the director was a big Malick fan who was also like, really into magical realism and stuff, and man, wouldn’t it be cool to make a movie that combined that shit?

A disappointingly hollow experience that confirms the theory that it might take a bit more than incoherent nature images and whispered poetry to make a Malick film.

Though I did like this better than Inglorious Basterds (the dialog seemed a bit less masturbatory this time around), it was still too much of a structural mess to really be considered a good movie.  The narrative wanders all over the place and through at least 2 endings before it is all said and done, making me wonder what this movie would look like if it were made by a director with an ounce of self-restraint.

Still, the acting was fine all around, and it really was good fun, so I can’t hate on it too much.

I’ve put forth the theory before that I have no problem with romantic comedies as long as they don’t try to be real movies, because formula and cliche are totally fine as long as you don’t pretend your movie is more than that.  And this is exactly the reason Silver Linings Playbook ended up leaving me with a sour taste in my mouth: it actually believed all the bullshit it was selling.

It was a fine movie all around, but I think it’s a bit much for it to try to get you to swallow the idea that true love (and a bit of dancing) conquers all, including serious mental illness.  Make this movie with Katherine Heigl and give her a wacky best friend and I would have loved it.  As it was, I only mostly enjoyed it (I won’t say how much of the enjoyment was due to seeing Julia Stiles in a supporting role).

I’m not really sure where to place this one.  It was well put together, and had a bit of style in the visuals, but I don’t know that I really cared about the story all that much, especially Jackman’s annoyingly noble “reborn” do-gooder.  Still, I guess a lot of people like this story, so I won’t shit on it too much since it just wasn’t really my thing.

Speaking of, while most of the music was kind of annoying, especially all the dialog that was sung with the same vocal phrasing, I had to grudgingly admit that there were actually a few decent songs in there–which was a pleasant surprise.

This movie might be rated a bit higher were it not for the decision to completely break from reality to turn a supposedly true account of something that actually happened into a ridiculous episode of 24 or something.  Seriously, I wouldn’t have even bought all the last second escapes and down the wire turns of fortune in a Fast and Furious movie, let alone the latest Affleck vanity project.

It had promise, but imploded due to a Tarantinoesque lack of self restraint when it came down to “spicing up the story.”

Like the superior Dredd 3D, Lincoln skips the backstory and goes straight for a much more focused narrative with excellent results.  DDL knocks it out of the park, as you would expect, and the supporting actors were all generally up tot the task as well (I especially enjoyed James Spader).

Still, I found myself constantly gritting my teeth about how thick they were laying it on in this film.  Sure, Lincoln was probably a great guy, but come on, didn’t you see my Life of Pi review? I don’t like being preached at.  In the end it all sounded like a bit too much Bush/Obama governmental abuses apologism for my taste.

This is what Argo should have done.  Instead of Hollywoodizing a true story, this film just tells it like it probably happened.  And yes, it’s boring as shit, but I think it’s a much stronger film for that.  I really enjoyed how it told an almost bias free story about the hunt for Osama Bin Laden (you have your suspicions about the filmmakers’ allegiences) and didn’t cave to traditional Hollywood demands.

And I don’t think it was necessarily pro torture. It was pretty ballsy showing all that torture stuff really, and I never got the idea it was there just to justify it.

Haneke does it again.  Which is to say we’ve got another harrowing examination of the more harrowing aspects of being human filmed by a master craftsman.  What is even more impressive than the brilliance of the filmmaking is how Haneke actually makes this a rather sweet story.  Yes, there is unpleasantness and hard truths galore, but at its heart this is a surprisingly sweet story of devotion.

At this rate Haneke might be making that Katherine Heigl movie I wanted Silver Linings Playbook to be in another decade or two.

For those who are interested, here are the 49+ movies from 2012 I did see, ranked in order of preference.  There really isn’t a way to make a list like this internally consistent.  Are these the most well made movies of 2012?  The ones I found most entertaining? Successful as films?  How do I begin to compare Dredd to Lincoln? Was Dredd really top ten material? Seriously, Dredd?

No one can really answer those questions, this is just a list of the movies that I thought were the most successful at what they set out to do, in rough order of preference from best to worst.

A few quick notes on my top ten:

I still haven’t seen quite a few of these, but I’m pleased to see both Moonrise Kingdom and The Cabin in the Woods near the top.

Magic Mike was ok, but you definitely liked it more than I did. Probably because Channing Tatum sends you from 6:00 to 12:00.

I can’t understand why you liked Hunger Games; I thought it was garbage.

Lincoln looked great and was finely acted, but fuck, you aren’t kidding about them spreading it on thick. Nevertheless, I enjoyed it.

I thought Premium Rush was pretty boring. Of the Joseph Gordon-Levitt offerings for 2013, I found Looper to be a lot more fun.

I was pretty disappointed with Skyfall, considering the positive reviews it got. Javier Bardem was good in his role, although his character wasn’t all that interesting. A far cry from Casino Royale.

Argo was kind of entertaining, but never in a million years would I nominate it for best picture. Alan Arkin was the highlight for me.

I notice you didn’t see Flight this year. It requires a somewhat high degree of suspension of disbelief, and the end is sappy, but Denzel is in fine form. The action near the beginning had me on the edge of my seat.

What’s your favorite best picture winner of the last 20 or 30 years?

I don’t know, I mean all it was was biking around NYC with an unlikable protagonist, but I was shocked how exciting I found Premium Rush to be.

Skyfall was fine, nothing special and rambling as usual…loved the cinematography though. Also: http://www.theonion.com/articles/daniel-craig-takes-home-pretty-good-actor-award,31428/

Flight looked kind of sappy, I suspect I won’t love it, but maybe?

I still really want to see Killing Them Softly and two foreign films ( The Turin Horse, Once Upon a Time in Anatolia) that I suspect I’ll like.

Oh, and looking over the best picture winners I don’t really like most of them, No Country for Old Men is probably my favorite (or Unforgiven if you go back that far).

I’m a Les Mis fanatic and both loved and hated the movie. Russell Crowe sing-talking really put a damper on the whole thing since Javert has some of the best songs in the whole thing. On the plus side: hot revolutionary boys, and I thought Anne Hathaway was pretty freaking fantastic with an original spin on the song we’ve heard a zillion times.
Also, I’m just saying: http://open.spotify.com/track/2iz8rx6Z5getFrpH5vBNQq
Join me and become a musical junkie.

Yeah there are only so many ways you can sing talk before it starts to get old. And I said I liked some of the songs… SOME! Anne Hathaway was really good (though I’d never heard the song), and Jackman was alright too even though he was kind of Ned Starking the plot…

Ooooh, Jackman was being like Ned Stark… that must be why I loved his role so much! Thanks for making that connection for me.

Also, I feel this needs to be said again, “It had promise, but imploded due to a Tarantinoesque lack of self restraint when it come down to ‘spicing up the story.'”

Wait, you are team Ned Carol? And here I thought I knew you…

Yeah, I think No Country is by far the best since Unforgiven (although I don’t really remember if Schindler’s List was any good, since I was 13 when I watched it).

…You don’t know the difference between David Spade and James Spader? Are you being serious right now?

Oops…this post was rushed out the door since I had an important LotR D&D game at 6:30 and was still finishing this up at 6…(fixed!)