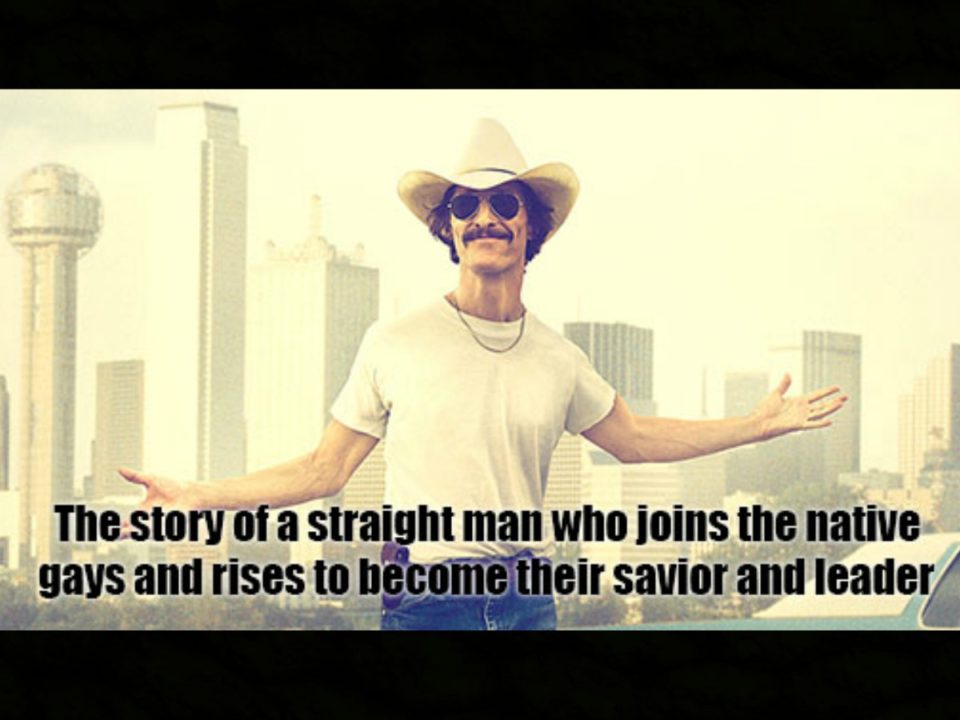 Here we are on year five of me actually watching all the shitty best picture nominations so you don’t have to. This year, though a fair amount made it into my top ten list (mostly because I didn’t see as many 2013 movies this year), I was overall fairly disappointed with the choices, mostly because just every fucking movie (except for my top 3 picks) was based on a fucking true story.  I’ve talked about this before, but by following a “true story” the narrative gets hamstrung by the facts and ends up feeling totally static and lifeless.

Of course, that’s just like, my opinion man, so , let’s get to a few more opinions about the supposed 9 best films of the year!

This was well made, but so thematically confused (and morally dubious) that it was easily my least favorite film on the list.  First, the movie would like you to know that the FDA is FUCKING EVIL.  Why?  Because they refuse to give drugs to people without testing them first–after all, these are sick people! They can’t wait for the drugs! So then the straight good ol’ boy Mcconaughey, who got AIDS from some totaly hetero prostitutes, goes to Mexico to bring back untested drugs for sick people.  Cut to later in the movie and the FDA’s drug they are testing, AZT, turns out to be dangerous and is killing people.  Mcconaughey is then furious that they were giving an untested drug to patients!

Meanwhile, he’s bringing up quack Mexican drugs of all different kinds  to the US and is charging outrageous prices to dying men in the United States.  And, the most annoying part of the film is that somehow, he’s supposed to be this awesome hero for doing that.  Finally, the movie ends with a title card claiming that AZT went on to save millions of lives after testing.  Ugh.

There were some nice tense moments, but I was waiting for this one to be over almost as soon as it started.  Hanks’ whitewashed Captain Phillips jumps from one deception to another as he outwits the Somali pirates and saves his crew at the same time.  It all felt kind of contrived–as if they added one too many creative liberty to the “true story” until the whole point of making it based on a true story was buried between one too many close calls.

This actually wasn’t so bad, Judi Dench was very cute and Steve Coogan gets a few good snarky lines in.  Unfortunately the lost child story just felt kind of Lifetime movie to me.  There were some good character moments between the two leads, but this one was just a bit too manufactured for my taste.

There sure was a lot of glitz and style to this one, but the longer it went on the more I felt like the substance was lacking.  Jennifer Lawrence was very good, it was all very well mounted, but I don’t think it added up to much of anything at the end of the day.  I think they spent more time picking out “hilarious” wigs than they did making a screenplay with something to say.

This is actually probably the best film on the list, cinematically speaking, so I can’t be too disappointed if it wins best picture.  However, it was so fucking unpleasant that there is no way in hell I’d ever want to sit through this if I had not started this stupid “watch all the best picture nominees” tradition.  Well done, but I have no interest in watching 2 hours of rape, torture, and misery.

4 – The Wolf of Wall Street

This is my other “secret” pick for best film on the Oscar’s list.  Scorsese is at the top of his game in this biopic that is actually a very successful comedy.  I don’t know how he does it, but Scorsese is about the only director that can make a biopic that I care about.  Unfortunately (and the reason for its lower placement on my personal best films list), by making such a stylish and hilarious film about the world’s biggest douchebag, he ended up making the world’s biggest douchebag way too likeable of a character.

This felt a little too on the button in places, but overall it was a very enjoyable dysfunctional family roadtrip film.  Dern really was great, and there were plenty of hilarious little scenes full of great small town characters.

This was awful hipster cute, but it thankfully had a lot to say about loneliness and relationships while it thankfully didn’t let the “technology is dominating our lives” message overwhelm things.  Also, it actually had a third act, which is more than I can say for the director’s collaborations with Charlie Kaufman.

People might bitch about the script, but hell, it was fine, I don’t really care if Cloony wants to Cloony it up and talk to fill space for a bit, because the dialog was hardly the reason to watch this one.  It was a nonstop, edge of your seat thrill ride that brilliantly capitalized on that “swimming in deep ocean” fear of dangling by a small thread over a bottomless abyss of space.  The special effects were phenomenal too!

For those who are interested, here are the 37+ movies from 2013 I did see, ranked in order of preference.  There really isn’t a way to make a list like this internally consistent.  Are these the most well made movies of 2013?  The ones I found most entertaining? Successful as films?  Shouldn’t Spring Breakers be higher?

No one can really answer those questions, this is just a list of the movies that I thought were the most successful at what they set out to do, in rough order of preference from best to worst:

Oh, I was wondering whether to see “The WolverineEnder’s Game” or “PhilomenaCaptain Phillips”. 🙂

Oops, yeah, had to rush this one out last night, time to do some cleanup… For the record, I’d rather see The WolverineEnder’s Game out of those two.

I probably saw fewer movies this year than any I can remember. Of all those listed here, I saw Gravity, Captain Phillips, Fast & Furious 6, Star Trek Into Darkness, and Before Midnight. I also saw that Metallica IMAX concert flick.

Of those, Before Midnight was far and away the best. Man, what a stellar trilogy that was. I think I liked Captain Phillips more than you did. Tom Hanks is a fine actor, and he had some powerful scenes. F&F 6 was hilarious fun, Star Trek was a massive disappointment, and Gravity was ruined by Sandra Bullock’s stupid fucking monologuing and George Clooney. Metallica IMAX was a blast.

I lied – I also saw The Conjuring, We Steal Secrets: The Story of Wikileaks, and Mud. I really, really liked Mud, but the other two were shit.

I watched Dallas Buyers Club and 12 Years a Slave this weekend. I thought DBC kinda sucked. McConaughey was very good, but Jared Leto should not have won best supporting actor for wearing a dress. I was more impressed with Fassbender in 12YaS.

I don’t know if the problem with DBC was the writing or the directing. The dialogue seemed ok, for the most part, but the scenes themselves didn’t ring true, even when the acting was solid. I was never emotionally invested in anything that was happening or in any of the characters. To me, that makes it a failure.

12YaS was a much better movie, although I think I would have enjoyed it more as a miniseries. It just seems to me it can be difficult to convey something of this gravity in a 2 hour feature. Chiwetel Ejiofor gave a fine, generally understated (considering the character’s circumstances) performance. Ejiofor had the more difficult acting task, considering the flamboyance of McConaughey’s character, but they were both really good in the roles.

I couldn’t decide which joke to go with, so I will simply point out that the actor in “Gravity” is named George Clooney. Also, how did you review that without even mentioning Sandra Bullock? Would you write a review of “The Proposal” and only mention Ryan Reynolds? You are a monster.

I would write that Proposal review if I were pressed for time, Ryan Reynolds were the only grating thing about that movie, and I wanted to continue my precedent of nitpicking the movies in a few sentences each. But, thankfully, Reynolds was delightful in The Proposal.

Yeah, the more I think about it I really don’t see any way to objectively evaluate different performances. Especially when the Academy seems to just go for scenery chewing more often than not. Agreed on Fassbender, he was pretty amazing in 12 Years. And Mcconaughey was better in True Detective.

You should check out the new Evil Dead…it was pretty well done, especially once it got the plot out of the way.