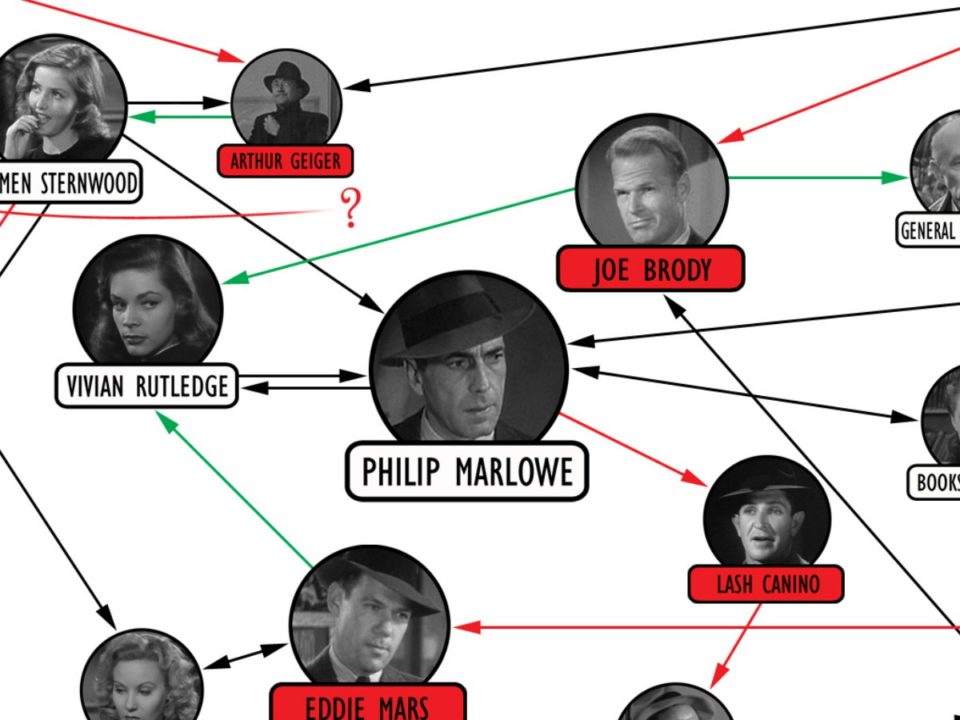 Not only is Howard Hawks one of my all time favorite directors, but I also love private eye films like Marie Antoinette loved cake. Thus it is not easily that I will admit that 1946’s The Big Sleep is just a wee bit confusing.  Honestly, it’s more than just a little bit confusing; I’ve seen it around 15 times and I can still just barely keep my head above the water when I watch it. I mean, don’t get me wrong, a plot that makes the end of Primer seem like the beginning of Primer is just part of the ridiculous appeal of The Big Sleep. But I’m not here today to argue the brilliance of an unreservedly brilliant movie. I’m here today to attempt to explain the plot.

And no, I’m not going to write 20 pages of dense exposition to attempt to make sense of everything. My blog is already tl;dr enough (especially considering Middle Earth Monday is coming up next week!)  Instead, I figured I would take a different approach. They say a picture is worth a thousand words, so I made this hopefully helpful chart that shows “who killed who,” “who blackmailed who,” “who wanted to do who” and “who did who.”  I’d advise printing this chart off on a large format printer before your next viewing of The Big Sleep so you can have plenty of room for detailed notes in the margins as the film progresses.

Anyway, here it is — The Big Sleep: Character Connections Chart:

I tried not to miss anything, and hopefully didn’t let my knowledge of the book bleed over into my understanding of the film (which changes the plot in many key areas).  Most of these connections were explicitly stated in the film, though I had to resort to educated guesses a few times.  If anyone has any ideas for other murdered/blackmailed/did connections let me know, I plan on updating this as I continue to rewatch the film.

And no, I’m still not sure who killed the chauffeur Owen Taylor.  But you can tell from the implied origin of his “murdered by” arrow who I suspect.  I mean how else did Joe Brody get those pictures that he was using to blackmail Vivian that Taylor grabbed from the camera after shooting Geiger because he was blackmailing Carmen?

This reminds me of the the primer character plot!

Also, the Mars me do each other? lmao

Well, that was a bit of an extrapolation based on how they acted in the movie. I think the bald one liked the weird one at least.

Marlowe, on the other hand, definitely nailed that hot chick from the book store.

Thanks! Made it because grad school gives me so much free time…

Thanks! Very handy!
Based on analysis at imdb.com (where I found your wonderful chart) I now think that:
* Carol Lundgren was with Joe Brody chasing Owen Taylor after Gieger’s murder;
* Brody took the photo ($ motive) and
* Lundgren killed his lover’s killer (crime of passion).
Later, Lundgren was watching Brody’s place when Marlowe, Carmen and Vivian were there;
* Lundgren killed Brody to keep him from revealing, under Marlowe’s grilling, that he (Brody) saw Lundgren kill Owen.
I also tend to think that Agnes was doing Harry after all her coworkers were killed or captured, although Harry seemed (more obviously in the book than the movie) to be a guy who could wait, so… maybe not.

This chart is brilliant! My wife and I were considering making one ourselves to help as a viewing tool. I think Joe Brody killed Owen. I am basing that somewhat on the shifty behavior of Joe during Marlowe’s grilling. Plus, who else did Joe get the photo? Maybe I am missing something. Probably so.

One of the best films ever made. Any film that gives you amnesia while you watch it deservers such high accolades!

Great, glad you liked it! “A film that gives you amnesia while you watch it”…nice 🙂

I know this is an old post, but my wife and I finally watched this film last night. Your chart is very well done. I would have to argue that this film had one of the most attractive cast of female characters of all time. Maybe it was just the consistency across the board. I loved the short jokes at Bogart and the chemistry between him and Vivian. I think your allusion to Joe Brody killing Owen Taylor is correct. Thanks for the chart.