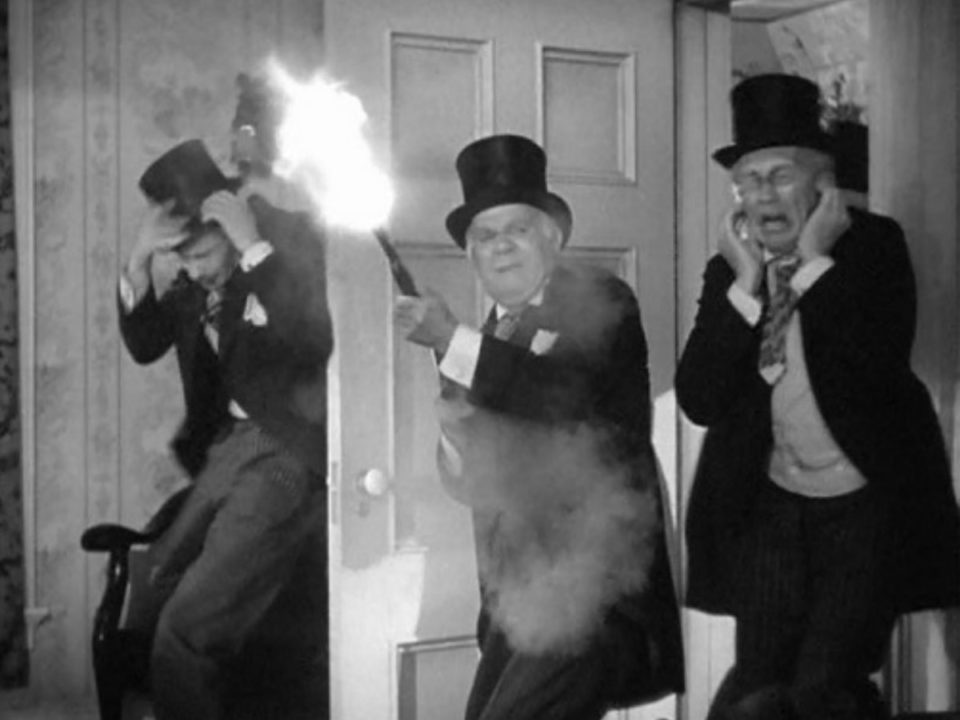 Some movies, when viewed at an impressionable age, can live on in our memories as possessing qualities far beyond their actual worth.  Ball of Fire, I’m happy to report, is not one of those movies.  It basically operates under the same premise as The Big Bang Theory (hot chick moves in with a bunch of nerds–hilarity ensues) and we all know how universally loved The Big Bang Theory is.  Seriously though, it’s a great set-up, I don’t care what they say, and Ball of Fire is an absolute delight to watch, no matter what your age or what your thoughts are as to the brilliance of the premise.

Speaking of hot chicks getting nerds’ danders up, Ball of Fire was actually loosely inspired by Snow White.  In Ball of Fire, a gangster’s girlfriend (Stanwyck, stunning even with those bangs) cons 8 nerdy professors (7 old and nerdy, 1 young and nerdy–Cooper, only slightly wooden) into letting her hide out at the house in which they are writing an encyclopedia.  I guess the parallels end there, but really, there’s a lot more to Ball of Fire than just the Snow White connection.

The idea of a hot chick slumming it with the nerds really hammers home a few key points.  Like the co-ed slumming movies I wrote about on this blog 8 years ago, when the hot chick goes to live with the nerds, they have a captive audience!  Finally, she is the fish out of water, and there are no big strong he-men around to trick her into overlooking the more sensitive qualities that the nerds just KNOW she will love once she gets to know them.  And hell, if SHE can give those nerds on screen a chance, then, maybe, just maybe, the pussies that watch these movies and eat this shit up might have a chance too.  Stuff like this made Ron Jeremy a porn star (though I suppose a 10 inch cock didn’t hurt either) and propelled The Big Bang Theory to become the number one show on television–there’s a lot of average Joes out there just looking for their chance.  Of course, the nerdy guy that gets the hot chick to see his sensitive side in Ball of Fire is played by the second most manly of all men, Gary Cooper, so I’m not sure what that says for the other 7 schlubs he lives with.

Still, problematic gender relations aside, this movie is so cute I think I’ve even heard myself “squee” out loud while watching it.  The script absolutely sparkles (as one would expect from Bracket and Wilder), both in terms of pacing and razor sharp dialog.   The performances are spot on, with an all star cast of Hollywood’s best old man character actors as the professors.  And, importantly, the hot chick is more than just a pair of legs, but actually a real person who is deserving of the adulation of the nerds.

And the little moments are just the icing on the cake.  The way Stanwyck moves to books to kiss Cooper.  The professors learning to Rumba.  Cooper enthusiastically failing to sing along at the club. The delicate flower honeymoon advice. The water on the back of the neck. And the sight of a bunch of machine gun wielding professors boldly proclaiming that “this is an up-stick.”  Maybe someone who “gets drunk on a glass of buttermilk” is probably not the kind of person gangsters’ girlfriends go for, but in the world of Ball of Fire, it all just seems to make sense.

Finally, fun fact, but Chet from Jock Blog’s catchphrase “on account of because” comes from this, even though, as Cooper sternly admonishes Stanwyck:  “Ms. Oshea! The construction ‘on account of because’ outrages every grammatical law!”  See? How can you not love this movie!?