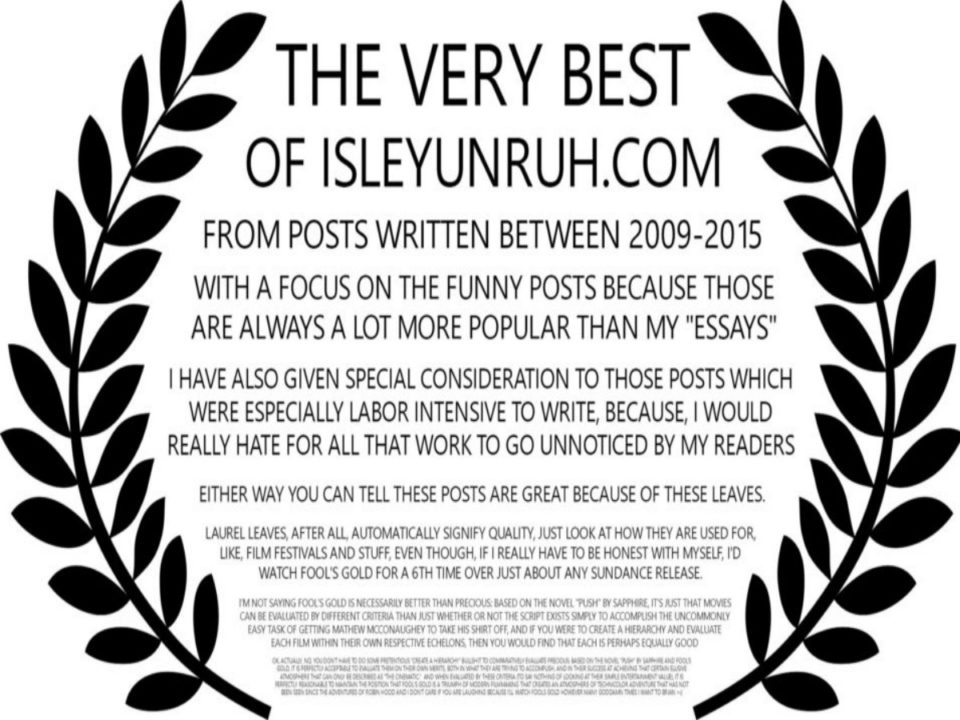 To give a little history, this website started as a Myspace blog in 2006 before moving on to become the internet sensation you have before you now. Actually, it technically started in 2005 as a string of random posts I did for a friend’s “bad poetry” blog, but, no matter the inauspicious beginnings, it was not until 2009 that I finally got a “real” website.  In the inaugural post for that website, I did a “best of the early years” list, and now, as I relaunch isleyunruh.com (in the aftermath of “the hackening”), I will do another “best of” post (actually, I will do a whole week of “best of” posts) before I get down to the task of actually, you know, writing new content.

So, to start the week off, here are ten of my favorite posts from the last 6 years or so. I’ve left off the Monday features that I’ve done the last 5 years, I will give them their own “best of” lists later this week.  I have also slanted this list more towards humorous posts, because, for all the “essays” I write, at its heart this is a humor website (or, at least, an attempted humor website), and I wanted to highlight some of my more successful ventures in that direction.  Additionally, some of these entries have “made the cut” due to particularly noteworthy (or, at least, time-intensive) efforts that went into their creation, or the particularly noteworthy effects of their publication.  With the usual hedging out of the way, here are 10 posts that are worth checking out in case you missed them the first time.

Ok, so the post that came in at number ten is far from my best work.  It was just a quick offhand list of ridiculous and sporadically clever “rumors” about the newly announce Hobbit movie.  Were it not for a moderately amusing photoshop (that has the dubious honor of perhaps being the internet’s first instance of putting a dragon into blackface), there isn’t a lot to recommend this one.  That is, there wasn’t a lot to recommend it until I cross posted it to imdb and ended up accidentally starting a 50+ comment shitstorm of butthurt Tolkien fans claiming that they had been all over Stephanie Meyer’s site and didn’t see anything about her writing the novelization for the movie anywhere.

Fun Fact – I honestly had no intention of trolling when I posted this to the imdb discussion board as I assumed the “rumors” were pretty obviously false.  So, never underestimate the gullibility of the internet.

9. The Lord of the Rings: A Critical Reevaluation

April Fool’s posts are an almost yearly tradition around here, but this one is one of my favorites, both for how painful it was to write, and for how close to the truth it begrudgingly flies in the name of April Fool’s trolling.  I got more than a few VERY angry emails from friends on this one, and that, right there, is all the reward a part-time troller could ever want.

Fun Fact – That is indeed the infamous Spinal Tap jazz odyssey reaction that Legolas is so unhappy about.

I love old movies, I hate Christianity, but put the two together and it hits some kind of weird sweet spot deep inside of me that I didn’t even know was there until I opened up like a flower for Cecil B. Demille signature touch.  I decided to just go ahead and embrace it and start writing a new feature where I detail the things I’ve learned about America’s all-time favorite religion via film.  Stay tuned this Easter when I finally get around to featuring the mother of all biblical epics that started it all, The Ten Commandments!

Fun Fact – The now deleted video of Hagar’s ice-burn on Sarah with an edited in rap battle reaction is one of my most disappointing Youtube copyright takedowns.

I’ve written about The Big Sleep before, and, while I might sometimes exaggerate the impenetrability of its plot, I don’t exaggerate much.  That movie is so hard to follow that, one day I sat down and (with a few calls to dad) mapped out the plot myself on a big piece of paper.  I then proceeded to collect screenshots of all the characters and photoshop the shit out of it–and I ended up doing such a good job that Roger Ebert himself tweeted a link to my picture!

Fun Fact – Once I saw all the incoming picture views from Ebert’s Twitter, the troll in me briefly wanted to switch out the picture with the goatse picture instead, but at the end of the day, the attention whore in my won out and I settled for the 10,000 picture views instead.

This was the time I decided it might be fun to write and record a black metal album over Christmas Break despite not having really picked up my guitar in almost a decade.  I talked my dad into wearing an evil robe and playing his bass clarinet (along with cardboard box drums) in the debut EP for my new “band” Unruh and we set to recording.  The whole thing was kind of a joke, but also kind of taken seriously, and I even came up with some almost decent songs in the two days we spend recording random riffs in an attempt to cobble something together.  Overall it was a lot of fun, I’ll just have to try it again sometime without hiding being a facetious safety net to preserve my ego from the blow of trying something serious with the same middling results.

Fun Fact – For a while, my dad’s corpse paint picture was the first google search when one searched for his name.

5. High Sierra and the Evolution of the Doomed Gangster

Sure, this is just one of my many “essays” about whatever random shit I’m into.  What is special about this one was that it ended up being the basis for my thesis in grad school.  This short blog post I wrote 8 years ago is probably a better piece of writing than the 90+ page thesis I defended on the same subject.  I’m not saying, by any means, that my blog post was more academically rigorous than my thesis.  I’m just saying, why say something 90 pages if you can say it in 2?  Which, right there, tells you all you need to know about how suited I was to grad school in the humanities.

Fun Fact – Most of this blog post actually made it into the introduction of my thesis.  It’s just too bad it wasn’t considered academically acceptable to stop there.

As I have said before, Goth Blog, the fake journal of a very dramatic high school goth kid was the very first thing I ever wrote for this blog back in 2005.  Since then, the story of Khaine, his brother Chet, and the rest of the cast of characters from Center Valley High has become more and more complex.  The Fall Formal Crossover special, an intertwined plot that crossed over between all the characters over 6 separate posts was the most complex story-line I have yet attempted.  And, I might point out, this was published 4 years before Season 4 of Arrested Development came along and stole all my ideas.

Fun Fact – While most (half?) of the events of the fall formal itself were made up, the inciting incident from Jock Blog was very real.

3. The Most Epic D&D Game of All Time

My incredibly petty and pedantic nerd alter-ego Eugene Pendergrass has been writing ridiculous satirical open letters for a while now.  I think they are all pretty good (though they can at times become rather one-note in their humor), but my favorite Eugene outing was when I let him live-blog a Dungeons & Dragons game.  But not just any D&D game.  You see, once, long ago, I decided to take part in a 60 hour straight (ok, fine, we took 3 four-hour sleep breaks) D&D game, and live blogged the entire event as Eugene.  The story he tells is basically how it all went down (except for the last day and half), because, as I found out one hour in to the game, it turns out I don’t actually like D&D after all.

Fun Fact – The rules argument in the snake cult temple was real (with Eugene playing the role of our dungeon master).  And I have still not spoken to that dungeon master to this day.

This whole blog post started when I was watching Dr. No and thought Felix’s sunglasses were kind of funny so I paused and took a picture of the screen.  Then I started pausing more and more and taking more and more pictures.  Before I knew it, James Bond Picture Book 1 was born, and to this day it remains one of my favorite posts.  Now, I just need to get off my ass and start work on the second entry in this increasingly misleadingly named “series.”

Fun Fact – I was excited to read this sanitized version of Bond to an actual child before realizing that it was all still far too misogynistic.

This is one of my newest features, and is rapidly becoming one of my favorite pieces to write for this site.  It sprung, Athena-like, from my ass one day while I was sitting bored at work chatting with my buddy Danny on gchat.  We began talking about old text adventure games, and before I knew it we somehow found ourselves role playing a bizarre outhouse scenario (sounds like my Friday night, AMIRITE??)  An hour later and the first installment of Re-Zork had written itself.

I love the opportunity to improvise on the spot and let the story end up in places that I never intended for it to end up.  And most of all I just enjoy subverting the most basic commands written by my friends like a 1980s dungeon master adjudicating a wish spell.  The series has become much more ambitious in the years to follow, but I am still working on dialing back my writing to give short, succinct answers like this first installment.

Fun Fact – I didn’t actually have any ideas for Wizard Mountain…but luckily Danny couldn’t find his way out of his house, so it wasn’t an issue.