No Coincidence – An Examination of When Lord of the Rings Took Place on Earth. 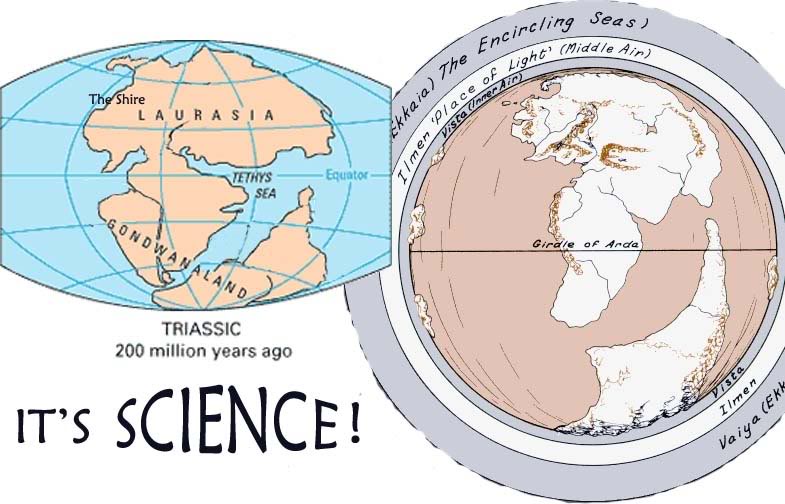 First let us look at the most prevalent theory of The Lord of the Rings‘ place in our prehistoric timeline, that is, the theory presented by its chronicler J.R.R. Tolkien himself. Tolkien has hinted that we are living in the beginning of the 7th age. Where then does this put the timeline of The Lord of the Rings? Assuming that each age ends with the fall of a tyrannical ruler/nation (as the 1st-3rd ages end), I would say that the following timeline is reasonable:

Astute readers will notice that this puts about 10,000 years from the changing of the world from flat to round at the end of the second age. 10,000 years is also in keeping with the type of creationism that the devoutly religious Tolkien would have espoused. Perhaps he too fell upon the creationist crutch of “long years in the beginning” to explain such a relatively short time period for our earth. Either way, I see no way to reconcile Tolkien’s world with our own were we to use this abbreviated 10,000 year timeline. Archaeological findings, modern science and geological evidence would all quickly disprove any attempt to place the fall of Sauron and the destruction of the One Ring anywhere near 5000 BC.

So where then shall we look? The answer I say lies back, way back. Based on close readings of the many maps of Middle-earth along with geological reconstructions of pre-drift continental plates, the time period of The Lord of the Rings could only have existed in the late Triassic era–around 200,000,000 BC. “Surely the book could not have taken place this long ago!” you may say, but this was undoubtedly the time period.

The first and most obvious evidence for placing the book in this prehistoric time period is in the map evidence. The ancient Numenorian sailors were excellent mapmakers and their maps all clearly coincide with one and only one landmass: Pangaea before its split into Laurasia and Gondwanaland. Keep in mind this was a time when the earth had newly been made round and Valinor was no longer present in the physical realm (being only reachable by the mystical “straight road”) thus leaving only one land mass surrounded by a great super ocean Belegaer (or Panthalassa as it is called today). The scientifically reconstructed coastline of Pangaea is an exact match when compared to the ancient maps of Middle-earth.

‘But what of the pleasing theory that Numenor was the lost land of Atlantis?’ you might say. That too can be reconciled. If we continue with our Pangaea theory then that would put Numenor off the Western Coast of South America at the end of the Second Age. Suddenly it becomes apparent that Atlantis and the even more legendary Pacific continent of Mu are positioned in the same place. This is the final proof that the two fabled lost continents of Mu and Atlantis were actually one and the same! At long last SCIENCE has solved that age-old riddle!

Irrefutable map evidence is only half of the equation though. Our other nagging questions are: what became of the myriad other races of middle earth that are no longer with us, and how did the race of man fall from what appeared to be a thriving position at the beginning of the Fourth Age?

As it turns out, these two events are catastrophically connected. If we continue with our Late Triassic era timeline it soon becomes apparent that even the hardiest of dwarven warriors and even the bravest of the Rohirrim could not hold out against a world wide extinction even that occurred 200 million years ago (the Triassic-Jurassic extinction event as it is called today) that wiped out about 20% of all marine families as well as most non-dinosaurian archosaurs, all humans, most therapsids, the last of the elves and dwarves, the last of the large amphibians, and most Hobbits.

The cause of this event is still mostly unknown, but recently some evidence has been retrieved from near the Triassic-Jurassic boundary suggesting that there was a rise in atmospheric CO2 and some researchers have suggested that the cause of this rise, and of the mass extinction itself, could have been a combination of volcanic CO2 outgassing and catastrophic dissociation of gas hydrate. But what would cause such a catastrophic volcanic event? Oh I don’t know, it couldn’t have had anything to do with some crazy hobbits throwing the last great magical ring of power into the depths of the most active volcano center on the planet could it!? If you play with fire, you should expect to get burned. If you throw a source of infinite evil and unlimited power into the fire, you should expect everyone to get burned. It seems to make perfect sense that the repercussions of the destruction of the One Ring had not fully been seen by the end of The Lord of the Rings.

So what are we left with at the end of this great destruction? Only the dragons (or dinosaurs as they are called today) with their jewel encrusted underbellies and natural love of all things firey were left standing and went on to rule the rest of the fourth age. Nearly all bipeds went extinct, condemned to not rise again for a couple hundred million years, while all evidence of the great civilizations built by Man, Dwarf, and Elf were completely wiped out in the volcanic holocaust brought about by the destruction of the One Ring.

So the next time you catch yourself thinking that history starts with The Epic of Gilgamesh, you might want to keep in mind that there is an “epic” history of a time long before Gilgamesh, and it’s called The Lord of the Rings (now PROVEN by SCIENCE!)

i really hope every word you write on this website is meant to be a joke. you cant be dumb enough to think the lord of the rings took place when dinosaurs were still around.

okay, quick question: why are all the humans, dwarves, and elves wiped out, yet only “most hobbits” are killed? The dwarves would have more protection than a hobbit in a little hole in the ground. Tolkien obviously did not mean for it to be during a specific time period, or else he would have thought it out and wouldn’t write that hobbits are still alive and hiding from us. It’s just fiction, and sometimes fictional novels don’t need a concrete setting.

Though this could be a well-written essay, the theory is terrible. lmao, wow I’m a high school student and yet I believe I’m more logical than you, however old you may be. Stop wasting your time, bud. Write something that makes sense.

Why just “most” hobbits? Where the hell do you think midgets come from??

If you won’t even take the time to think critically I see no way I can have a proper discussion about this with you.

I understand that they could have a connection with midgets, but there’s many many points to my argument:

1) How would they survive when basically everything else except the dinosaurs gets wiped out? Like I said, the hobbits are much less protected than dwarves and men, and the hobbit holes would be completely destroyed if all the other civilizations were.

2) Then what about after that, when only the dinosaurs and them are left. Imagine just little hobbits running around with the dinosaurs for years and years, and even managing to outlast them and live through whatever killed all the dinosaurs.

3) There were no apple trees, oak trees, maple trees, etc in the triassic period (so how would the characters or lord of the rings always have apples?). Flowering plants were the last to ever evolve.
And if you say the trees did exist, and were wiped out with everything else, I have an argument for that too. If mount doom’s explosion took out all those trees, it would mean taking out all crops, bushes, livestock… basically everything that the hobbits would need to survive through millions of years. Plus, they wouldn’t be able to plant new stuff for a long time because of the volcanic ash.

4) Why would we still speak English? Even if the hobbits DID survive all this time, languages change constantly, and over millions of years I seriously doubt we’d have any of the same words. Cavemen certainly weren’t speaking english.

5) In the triassic period there weren’t just a few dinosaurs here and there, they were EVERYWHERE. They would be sitting in the shire, just waiting for a hobbit to poke his head out so they can eat it.

6) Mount Doom would have erupted like that right away. The Hobbits wouldn’t even have time to go all the way back to the Shire, they’d be dead.

I’m not trying to be all snotty and everything, I just like arguments like this. It’s fun for me, sorry if it annoys you.

If ‘most’ hobbits were wiped out, are you suggesting that modern humans are descendants of hobbits? Or, did some humans remain in a stagnant population for ~197 million years?

I think you are getting at something here.