Cinema Scripture School 2: The Bible – In the Beginning (John Huston, 1966) 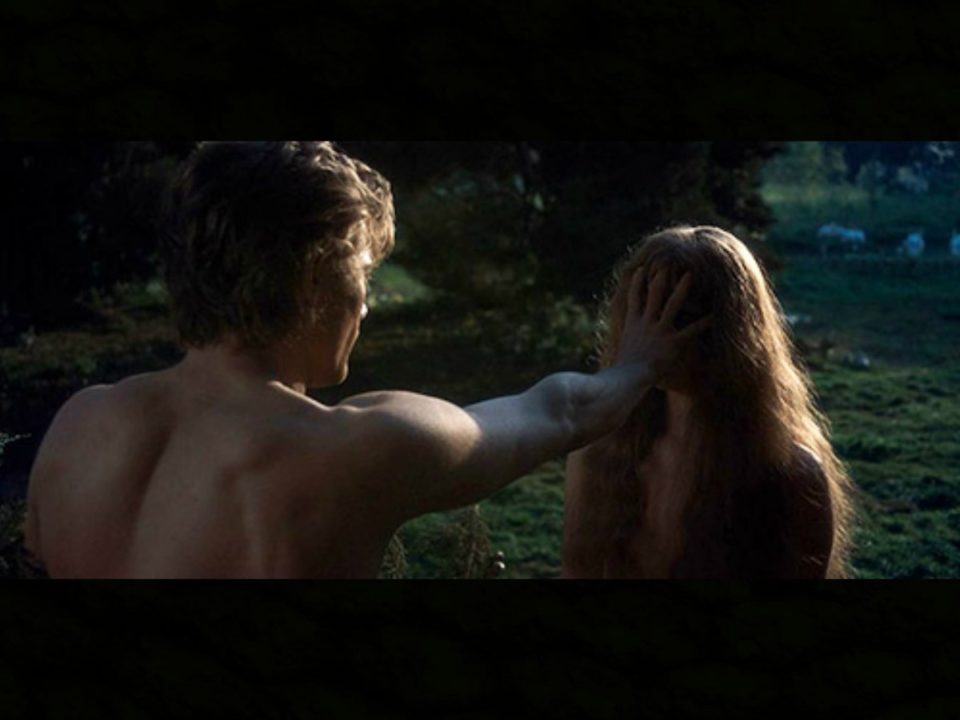 Because the Sunday mornings of my childhood usually involved me sleeping in and then eating blueberry pancakes while watching Basil Rathbone Sherlock Holmes movies with my family, I have quite a few holes in my biblical knowledge.  Luckily, due to an early exposure to The Ten Commandments (how awesome was Ramses? How hot were those bangs on Nefertiti?) I’ve always had an odd (considering) appreciation for Bible movies.  Therefore, I figured I’d make this little bible history lesson a recurring feature on this website.  On the menu today?  22 (one for each book of Genesis that was covered) things I learned about the Old Testament from John Huston’s 1966 epic, The Bible – In the Beginning.

Eve was looking fine too.  Unfortunately, The Garden of Eden was apparently full of really low lighting and shadows, which made it super hard to “see everything.”

2. Snitches don’t get stitches, they get thistles.

Adam, TOTALLY ratted out Eve.  Like, he didn’t even try to cover up his whole eating from the tree of knowledge thing, he was just straight up “Ummm…it was her! Her! She made me do it!”  As punishment, Eve got childbirth, and Adam got like thistles or something.

3. Cain gets no respect.

Ok, so apparently Abel sits on his ass and plays flute all day, while (the much swarthier) Cain works harder than a motherfucker plowing and planting the fields (all the while watching out for thistles).  And then, when they both bring sacrifices to God, the Dude shits all over Cain’s grain? Then, Abel all smug-like says “you should have done good work like me!”  I would have wanted to kill the fucker too.  Or at least upper decker his toilet or something.

4. It took God a while to figure out “punishment.”

Cain brutally murders his brother (deserved or not) and gets the horrible punishment of not being allowed to plow the land anymore in addition to not having to worry about anyone killing him ever.  All for the price of a facial tat.

5. Where the fuck did Cain’s wife come from?

First there was Adam, and then Eve came from his rib, and then they had Cain and Abel, and then Cain killed Abel and was banished.  Then Cain got married and had a line of evil men and….waaaaaaait a minute.  Who the hell did Cain marry? Based on the beginning of the movie, it seems she would have had to been either a fish in the sea, a bird in the sky, livestock, a wild animal, or a creature that moved along the ground.  Maybe he mated with a monkey…who says the bible doesn’t have evolution?

If God is all knowing, could he create a rock so big, even he couldn’t throw it?  Wait, I told it wrong.  What I meant to say was wouldn’t he have known that Cain and his monkey wife would have created an entire world of evil humans through their prodigious (now that I think about it, maybe she was a rabbit, not a monkey) fucking?  Meanwhile, goodie two-shoes Seth apparently only produced one non-evil descendant, Noah.  And if God knew that would happen, couldn’t he have just lifted his whole “avenged sevenfold” ban on killing Cain (while at the same time upping Seth’s libido) and thus saved himself from killing EVERYONE?  And, of course, he would have saved the rest of us from a shitty band as well.

It seems everyone who wasn’t Noah and his family had facial tattoos:

Must have inherited them from Cain.  And I bet that made it hard for Noah and his family to get jobs in that world.

Apparently Noah loved to act goofy in a crazy old man robe while galavanting with burping hippos and rapey elephants.  Of course, when he wasn’t getting his foot stuck in tar buckets, he was calling the rest of the human race “chaff” (or sending animals off his ark into a post flood barren wasteland to die), so maybe his ratio of “wacky old man” to “hard pipe-hitting mother fucker” was pretty much even after all.

9. Men didn’t understand periods back then.

Noah: “Boy, it’s so cloudy, with no sun I don’t know how long it’s been raining!”
Noah’s Wife: “Um, it’s been raining for 22 days.”
Noah: “Whaa?”
Other women: “Yeah, 22 days.”
Noah and other men: “But how dost thous knoweths?”
Women: <nervous glances> “Um…because we counted how many times we milked the cows?”

That is basically the actual dialog, they even said 22 days. Side extrapolation:

Apparently a rainbow is God’s sign that he will not KILL FUCKING EVERYBODY any more (unless you name your city after butt sex).  Though, I’m still a little worried about what a double rainbow means.  What does it all mean??

11. So that’s where Nimrod comes from!

At first I thought “oh man, sucks to have your parents name you Nimrod!”  Then I realized that that was probably just where the word came from.  Of course, he seemed more like a hardcore motherfucker who built a giant motherfucking tower to shoot at God with a motherfucking arrow than some kind of nimrod!  Maybe he was a nimrod because he thought painting a unibrow on his face looked cool:

I mean, I know Sarah was played by Ava Gardener and all, but that dude was all over her hoots:

Of course, she did tell him “Let my beloved come into his garden and eat his pleasant fruits,” so I can’t say she was against a little nipple play herself.

Let’s look at the facts here.  He cast off his barren wife for a younger model, and then cast off his emo son when he got a better one.  He went all berserker on the Canaanites (ok, that was kind of badass), killed more innocent goats than a bridge troll, tried to kill his own son, and started the practice of circumcision.  Also he was kind of gruff.

I mean, damn, not only did she steal Sarah’s husband, but then she dropped a SICK burn on her.  I was going to just quote the dialog here, but I thought it would be better for everyone to see how a great director like John Huston handled a scene like that, so I uploaded a clip from the movie onto youtube:

[Embedding seems to let it play still, but, alas, my old youtube nemesis “content id claims” has blocked this video on youtube itself.  It usually goes away eventually, if it doesn’t play you’ll just have to imagine how hilarious my video was.]

Maybe if his mom wouldn’t have dressed him up with all that ankh looking jewelry and eye makeup his dad would have loved him:

16. For the love of God, make sure there are always at least 10 righteous people on earth!

Apparently, God only commits genocide if there are fewer than 10 righteous people among the sinners.  Initially it was 50, but Abraham, in the one nice thing he ever did with this life, talked the angel Peter O’Toole into talking God down to 10.

Based on the depiction of Sodom, the following things should be punishable by death:

18. No really, angels are totally sexy.

At least Lot’s daughters thought so.  And based on the way they looked at them, I’m starting to think that Lot’s claim that they were virgins when he offered them to the Sodomites to do ANYTHING they wanted to them might not be wholly true.  Also, Lot? Based on that, was apparently also kind of a dick.

Too bad they left that part of the bible out of the movie!

Things in the bible that deserve a slow clap:

21. One does not simply walk into Moriah.

So Abraham decides it would be a good idea to sacrifice his good son (Isaac) to God and prepares to leave.  Isaac is all excited and tells his mom that dad is taking him to Moria in the mountains.  And somehow this did not tip him or Sarah off that the trip was a HORRIBLE idea!?  This is why kids should read The Lord of the Rings instead of The Bible–so that they know when to tell their fathers that they’d rather stay home from family vacations.

I mean, really, this was apparently only the first part of the first book of the bible and all I could think was wow, what a cocksucking motherfucker.  And I’m not even talking about all the tons of minor dick moves like putting a tree (of KNOWLEDGE no less!) right in the middle of the paradise He created for his playthings and telling them not to eat its totally delicious fruit.  And I’m not talking about the major dick moves like the fact that He killed more people than Hitler and Stalin put together (and not just once!)  I’m talking about the fact that God was such a vain little bitch that felt the need to play fucked up power games with his playthings just to see if he could make them kill their own children.  Total scumbag: 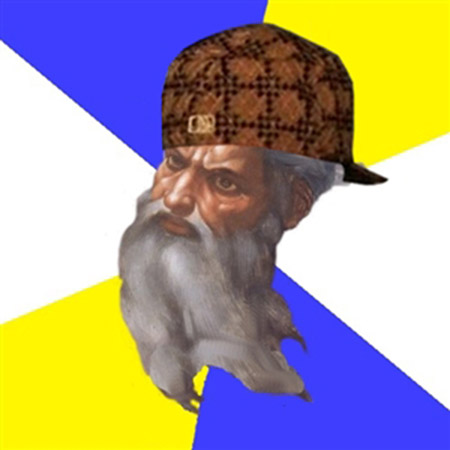 I sometimes wonder if the people who say they feel so blessed to have God in their lives to depend on have even read the Bible.

1) Upper-Deckering toilets solves all problems.
2) Fucking magnets, how do they work?
3) Scumbag Steving God… pure genius
4) Does god get laid?

You know, I wanted to Scumbag Steve god…but then I googled it and found out I was way late to that party. Bummer.

And I don’t know how often he gets laid, but god totally banged Mary…

This may be the funniest thing you’ve ever posted. Side note: I had no idea that angels have avian bone syndrome.