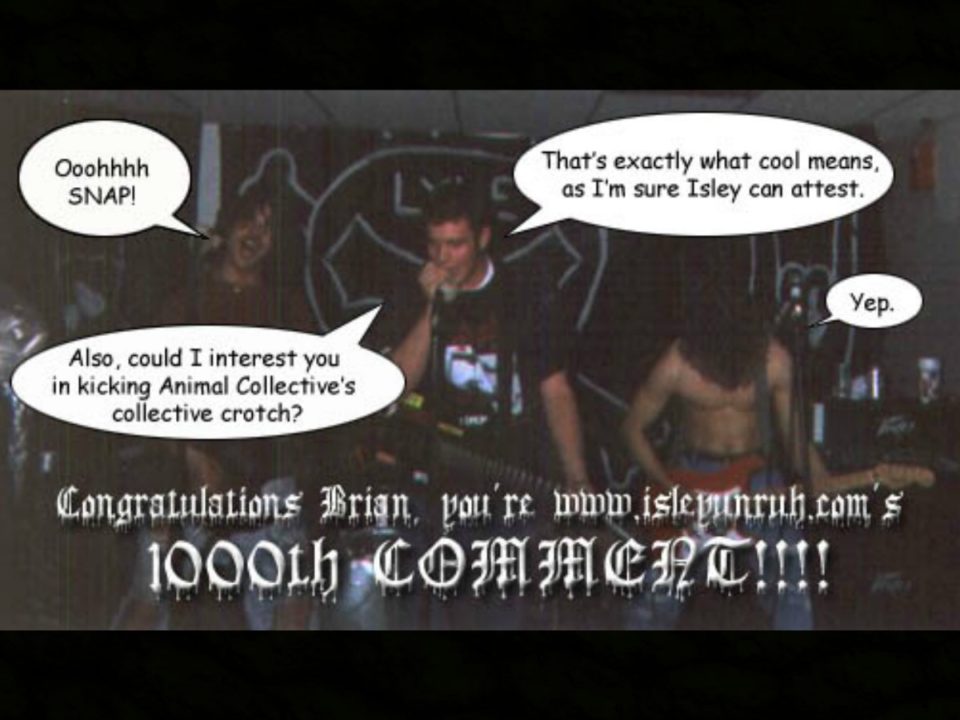 Hey everyone! It’s a www.isleyunruh.com party!  It’s not every day that I reach 1000 blog post comments, so I thought I’d invite everyone over (even if most of the comments are probably from myself).  So come on in!  There are plenty of appetizers, music and fun for everyone as we relive the 1000th comment in all its glory!

Ok, I guess, I exaggerated.  I’m actually running a little low on appetizers.  Although, I guess I’ve never shared my recipe for blended oatmeal–I figure that should count as an appetizer right?  Anyway, for those who think oatmeal would be better if only it were gooier, here you go:

How to Make Isley’s Blended Oatmeal

Start with one large container of old fashioned oatmeal.  Do not, I repeat, do not use quick oats.  You wouldn’t eat white bread would you?  So why would you eat processed oats with half the nutrition of “old fashioned” oatmeal (I mean, aside from ease of cooking and better taste of course).

Anyway, take the container and pour half of it into a blender dry.  Do not pour it into the blender cooked…I mean, you will get the same result, but that way you are just making baby food.  This way you are making “cream of oatmeal” powder.  Turn your blender on high and you will notice a hole develop in the middle of your oats.  Use your fingers (or a spoon if you want to be a pussy about it) and push the unblended oats away from the side into the hole until all of your oatmeal is completely powdered.  Pour the result into a mixing bowl and repeat with the other half of the oats until the entire container is blended (I’ve found that if you try to blend the whole container at once you will just jam up your blender).

You now have concentrated oatmeal powder.  Cook as normal, only using slightly more water because the mixture is denser than regular unblended oats.  Season as normal (molasses, carob powder, peanut butter and raisins of course).  Enjoy your delicious treat!

What’s that?  No one is hungry?  Well, in that case, let’s just start the music and get on with the award ceremony!  Unfortunately I was unable to obtain the copyright for the song I wanted to use, but this close approximation will have to do.  So, Brian, there’s no one else who does it like you do:

I know you are all still rocking out to that, but let’s move on here, I’ve got some afternoon appointments.

Now, I don’t want to take away from Brian’s special day, but I would like to thank those who made his achievement possible.  First and foremost, I would like to thank myself.  Without my constant posting on my own blog posts, we’d still be in the 500s.  So let’s hear it for me!  Second, I would like to thank the post “HObbit Movie Rumors.”  Without its nearly 10,000 views and 56 comments (and gullibility of the interneters who thought it was real), none of this would have been possible.  Third, I would like to thank Michael Jackson for starting the Arcade Fire (whoever the hell they are) argument that led to Brian’s comment.  I would also like to, of course, thank Jesus.  Without you black metal’s lyrics would not be nearly as awesome and I would have nothing to write about on www.isleyunruh.com’s most popular feature: Mailbag Monday!  So keep up the good work buddy!

I would like to not thank last month’s Middle Earth Monday 13: Edhellond.  With its (currently) whopping 8 views and 0 comments it has done nothing to help www.isleyunruh.com reach its 1000th comment.

Now let’s go to the runner up for 1000th comment from longtime commentor “Amy”:

Bah, their new album is solid, especially the final third (JWo and I have had arguments over Rococo). Also, for the record, I want to kick Arcade Fire in their Collective Crotch (great band name?) because they are so full of themselves from way back and I totally blame the Quebecois Contingent (also a great band name?)

Also, if “cool” means enjoying listening to Cookie Monster rant about rivers of blood with background orchestration by a bunch of guitars being turned up to 11 and dropped down a spiral stair, then no, I never will be.

Good effort, but you fired that baby off just a little too soon!

And now, the moment you’ve all been waiting for, Brian’s BRUTAL rejoinder:

That’s exactly what cool means, as I’m sure Isley can attest.

Also, could I interest you in kicking Animal Collective’s collective crotch?

I can indeed attest to that being what cool means!  I don’t know who Animal Collective are, but I’m guessing from the context that they are a metal band that has sold out.  If Brian knows one thing (in addition to how to time a comment) he knows his metal, so, I’ll trust his expertise on this one!

To finish, let’s go straight to an interview with the man of the hour!  This is quoted from his now legendary “comment #1002”:

That’s right folks, you all better watch out because Brian’s got his eye on 2000!  …which may be sooner than you think if Middle Earth Monday will ever finally take off and get the kind of comments I know it deserves!

I was to understand there’d be pie and punch.

That small oversight notwithstanding, this entire post is comedy gold.

Well, at least I got a point in the “Assist” column. I shall forever be the Garfunkel to your Simon, Brian.

I don’t mean to offend, but you’re really more the Blasphemer to my Euronymous.

Or, to use the parlance of the common folk (excepting Kathie Lee and Isley), the Arcade Fire to my Bruce Springsteen.

I can’t really find a way to argue with this.

Also, I believe the picture for this post is the only actual photographic evidence of Brian’s brother “Banjo” in existence.

No offense, but that oatmeal sounds kind of gross? Carob powder? For real? Also, what you’re talking about, isn’t it going to make for… mush? Gruel, basically?

Not only that, but it suggests (quite convincingly) that my brother is a mangy hitchhiker who will fucking kill you.

No offense taken, no one else at the 1000th comment party wanted to eat it either.

But I still say it’s delicious!

I could maybe see an issue with the molasses, it doesn’t really go well with Carob Powder…and not everyone shares my love of blackstrap molasses anyway. You can switch it to honey if you aren’t feeling adventurous. And since I stay away from caffeine, cocoa powder is out…heh, and I’ve always liked the taste of carob powder anyway. Also, I cook the raisins with the oatmeal too…

And again, I like to think of it as “cream of oatmeal,” not gruel, mush or baby food…

In a pinch, you could use it to repair your drywall.