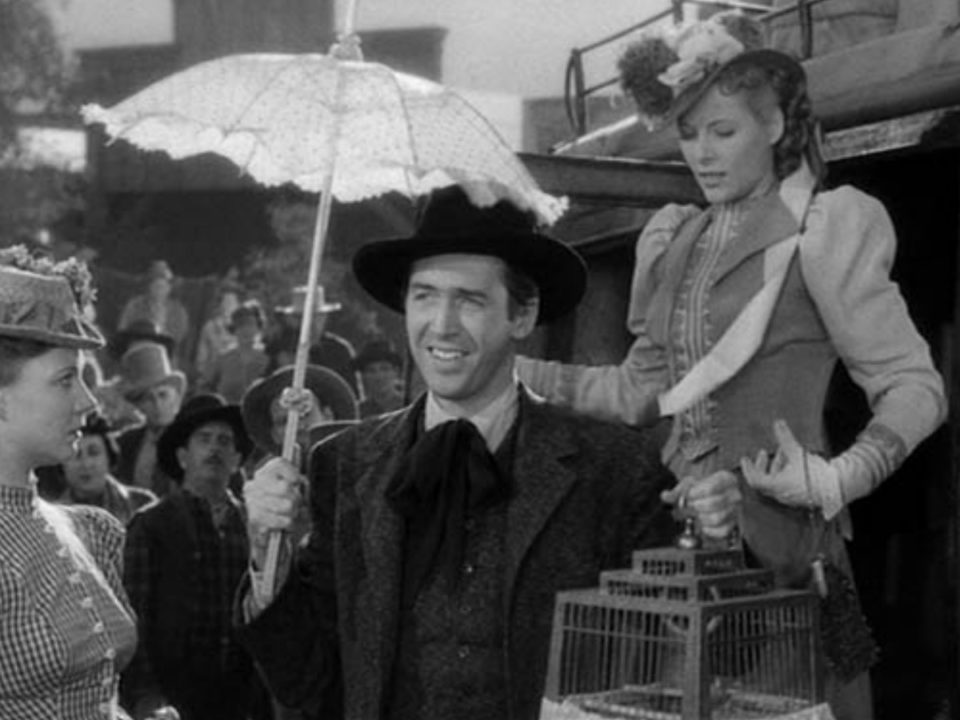 As one of the first, and most famous, “pacifist westerns,” it is tempting to discuss Destry Rides Again in terms of the fascinatingly contradictory tenants of that genre.  However, because I’ve already discussed pacifist westerns, I figured that today I would instead discuss what it takes to be a “classic western,” something of which today’s film is unquestionably one of the most notable examples.

When I say “classic western,” I don’t necessarily mean a film of high artistic worth that has withstood the test of time better than most (though this most definitely holds true for Destry Rides Again).  I’m instead talking about those American western films that saw the world in black and white, where shades of grey were for book learned easterners and the untamed frontier held the promise of all that America could be.  A classical western will never look at the real life consequences of violence, not even the supposedly “pacifist” classical westerns.

Honestly, to call Destry Rides Again a “pacifist” western is rather disingenuous. Yes, the hero carries no gun, and preaches the benefits of non-violence.  But that is only because he is so comfortable in his capability for violence that he doesn’t need to prove it to anyone, least of all the viewer.  We know that no man that self-assured is going to walk into a situation that is beyond his abilities.  Not in a classical western.  Thus, we sit back and wait for that moment when he finally lets loose and kicks some ass.

The classical western can seem naive and simplistic on paper.  Yet another tale of bad men stealing land to profit when the railroad (or in this case, cattle) comes through.  Yet another tale of a righteous sheriff cleaning up the town with his six shooter (though, in this case, the sheriff pretends not to need a gun at first) so the good townsfolk, who had been cowed by the bad townsfolk, might be left to live their lives to their fullest American potential.  Yes, a film described like that sounds like it would pale horribly in comparison to much more nuanced revisionist western masterpieces like McCabe and Mrs. Miller or Pat Garret and Billy the Kid.

And yet, Destry Rides Again holds up just fine in comparison.  There is an archetypal myth-making joy in the best examples of the classic western, something that touches something inherently American in the viewer.  Westerns, after all, are the closest thing we as Americans have to an origin story, and when you produce them with the full power of the Hollywood machine, operating during a period where it was cranking out more masterpieces per year than any country or time period before or since, you are going to end up with something special.

Destry Rides Again, is simply a brilliant work of cinema.  It is at the same time funny, action packed, dramatic and even makes room for a few songs without ever seeming disjointed.  This is not merely a competent B-movie like so many of the pre-Stagecoach (a movie released the same year as Destry Rides Again) westerns of the 1930s, Destry Rides Again is fantastic film for any genre.  There isn’t a single part of this production, from the spot-on performances, to the hilarious script, to the brilliant cinematography that is not the equal of the best work from Hollywood’s best years. It might not approach anywhere near the same depth of insight into the pacifist western genre as does a film like The Man Who Shot Liberty Valance, but I’d be hard pressed to say Destry Rides Again is not just as good as that John Ford classic western anyway.

I do remember enjoying this film, although (yes I am about to be that guy) the book was way better. About the only things they used were the names of the main characters and the ‘I won’t touch a gun again’ premise. As a stand alone film it was good however. I remember Dietrich’s role being very well done. It has the part that Liberty Valance didn’t when the guy stops being a wuss and shoots all the bad guys. In that way it is more enjoyable to watch but probably falls short of your pacifist western genre. Good pick.

Yeah, Liberty Valance is tough to pin down, I’d say it’s a classical western, but it definitely has a more modern take on muddying up the themes it is dealing with. I do love how ambiguous it is…even though Stewart never sacks up in it (not counting a briefly aborted attempt to sack up), sacking up is shown to be the one thing that did him the most good. And yet it was wrong, but it wasn’t, but it was…lots of layers.

That stuff is fine and dandy, but sometimes I just want a simple good old fashioned WESTERN. And man does Destry fit the bill there. That it is exceptionally well made as well is just the icing on the cake.

Your discussion for this movie reminds me of my pet theory (full disclosure: The nature of pet theories is that almost anything reminds you of them, causing you to bring them up on random blogs at odd times)that the Kurt Russell movie Soldier was actually a Western.

Consider – he leaves war behind and moves to isolated frontier settlement where his mysterious past makes the locals soil themselves. Just as they toss him out on his keister, some major baddies come to town and he has to pick up his gun to save the town that spurned him. In the end he gets the girl and they ride off into the sun(s)set together.

Soldier is no Destry Rides Again. Hell, it’s not even Escape from New York but I think it shows the Western formula is far from dead in Hollywood.

Anyone who would disagree with this analysis shouldn’t – as it only encourages me.