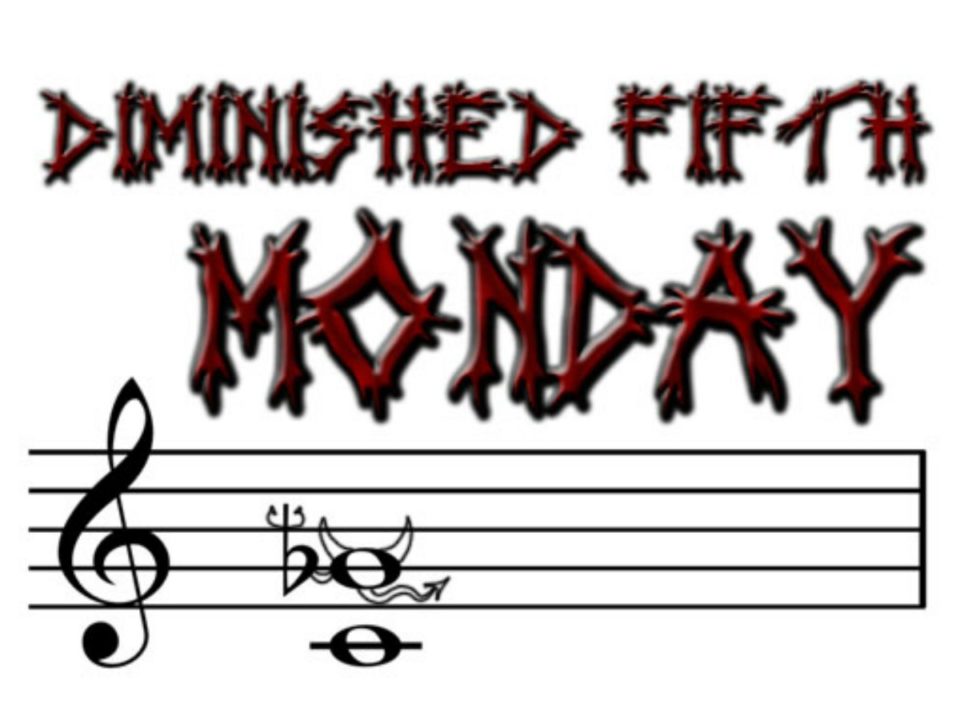 A month with 5 Mondays is like a year with 13 moons or a man with 6 fingers upon his right hand…it means trouble.  Well, not really, but I figured I’d use that as an excuse to talk my favorite “troubling” musical interval, the diminished fifth (AKA, Diabolus in Musica, Devil’s Tritone, Satan’s chord or Lord Naughtypants’ Harmony).

I’m no musical theorist (though I play on in this blog), but let’s start with a bit of simplified musical theory.  Western (hemisphere) music uses 12 (semi)tones in various groupings to build its music.  Most compositions will be in a certain key (or at least sound like they are in a certain key)(unless they use all 12 notes roughly equally–but that probably wouldn’t sound very pretty…) which is to say they will always want to come back to one note, the root note.  Depending on which notes they use (most traditional western music uses 7 of the 12 notes to form a scale for the song to draw most of its notes from), the key will be major or minor.  For instance, if you are playing in the key of C, your song will probably end with the note C, and if you use a lot of the note E (a major third) in that song it will sound more upbeat than if you use a lot of the note E flat (a minor third) instead.  The example of E (relative to C) is called a major third because it is the 3rd note of the C major scale.

Now, if you play the root note (tonic) with the fifth note of most scales it creates a very pleasing harmony.  So pleasing that you can even layer a ton of distortion onto it and it still won’t sound like shit (which is why metal guitarists play that “power” chord more than any other).  Yet, if you lower the fifth one semitone, you get the “diminished” (as opposed to “perfect”) fifth and it sounds just plain Evil with a capital E.

Take a look at this clip from Fritz Lang’s M, where the child murderer whistles Grieg’s Hall of the Mountain King before each murder.  The 8th and 10th notes…just after the pause are diminished fifths and (along with the minor thirds) contribute a great deal to that melody’s creepiness:

All those sound waves beating together just doesn’t sound quite right.  If you leave a melody hanging on a diminished fifth, the ear will naturally want it to be resolved to something more consonant.  A good example is the opening of the Pixies’ “Ana”:

That chord just hangs there, not necessarily evil, but definitely aching for some kind of resolution.

Not that every use of the diminished fifth must necessarily be full of discord and unresolved sound waves.  Just take a listen to Busta Rhymes’ Woo Ha:

The bass line goes tonic, octave, diminished fifth…then up a half step to the perfect fifth twice before finishing on the tonic.  It doesn’t necessarily sound all that evil (not that it sounds all that holy either), or even out of place, most likely because it immediately goes to the perfect fifth and makes everything ok to the listener’s ear.  Yet it is still an unusual melody since the interval is so relatively rarely used, and thus much more interesting than had Busta used only the perfect fifth.

Though the interval was never widely used in classical music, (it wasn’t until the romantic era and later that it started cropping up in songs like Saint-Saëns’ Danse Macabre), this was probably more due to its dissonant nature than any fears of demonic possession.  I can find plenty of stories about “the church” banning the interval, but no actual verified accounts–which is too bad, because that would have been pretty badass.

And I don’t mean to play the diminished fifth off as just being discordant.  There really is something just plain unholy about it, which is probably why so many metal bands love to use the interval.  Thrash masters Slayer love using diminished fifths, and a play through of Raining Blood is all it takes to find a ton of them.  In this selection, the repeated riff has four groups of notes, the high note of the second group is the diminished fifth:

Death Metal bands use the diminshed fifth quite a bit as well, as is the case with Profanatica’s (later havoheJ) Weeping in Heaven.  A hilariously detuned tonic goes to the diminished fifth, then second, minor third, second to create a pretty damn evil riff:

However, out of all extreme metal, Black Metal bands seem the most fond of the interval.  Here it is in the 7th note of Burzum’s Ea, Lord of the Depths:

And again in the third note of this deliciously evil riff from Mayhem’s Funeral Fog:

Of course, what discussion of the diminished fifth in metal would be complete without finishing with Black Sabbath’s song Black Sabbath from the 1970 album Black Sabbath:

Whoa, I did not know that there was such a song. This joins a list I have in my head of bands who name their first song and album the same as the band, though it doesn’t quite stand up to the other one on my list, Talk Talk (by Talk Talk… off the album Talk Talk.) Still, well done Sabbath. That is one evil tone.

Heh, I don’t think Deicide released any singles, but it’s one of my favorites from the album: http://www.youtube.com/watch?v=8SM2FrsY4Gg

Also, on review, the transparency of this central text strip makes, in particular, the Sabbath video look really cool, because it’s like they’re playing in this very same gloomy forest, and it took me quite a bit of studying before I determined that it wasn’t part of the video. Neat!

I don’t know, Isley…I’m pretty sure “Satan Spawn, the Caco-Daemon” was a club hit in the summer of ’92.

And thanks for the diminshed fifth song suggestions. Of course now I have Woo Ha stuck in my head because of you.

Yes, yes, my evil plan is proceeding perfectly! For soon, I will, indeed, have you all in check!

Oh, and you’re quite welcome. Happy to help.