Boys will be Boys: Double Standards in McLintock! and The Awful Truth. 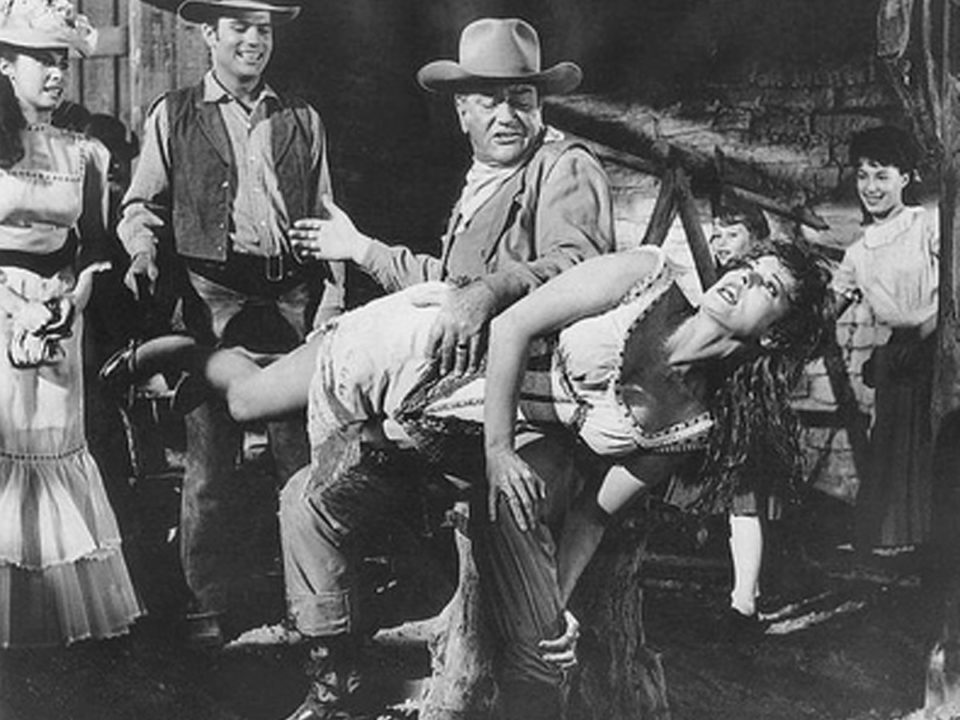 There is a strange theme in the plots of the two otherwise enjoyable movies; The Awful Truth (one of my favorite movies, as I explained in my previous blog post) and McLintock! (no masterpiece but still fun–plus, you gotta love a movie with an exclamation mark in the title). Both movies rely on a husband and/or wife thinking the other is cheating to create the split that must inevitably be reconciled by the end of the movie. Yet for some reason, after going to extreme lengths to prove the faithfulness of the wife, the husband’s transgression is left unaddressed! I have a couple theories as to why this is so, but first let’s take a look at the details.

The Awful Truth begins with Cary Grant at a tanning parlor explaining to his buddy that he better tan so his wife (Irene Dunne) won’t know that he hasn’t been to Florida for two weeks like he told her. Yet when he sees his wife and discovers that she spent the night in a hotel with her singing instructor when their car broke down he is quite upset. Even when his wife comments on how it is strange he got a tan when it was cloudy in Florida and that the oranges he brought back were from California, his response basically boiled down to “well you cheated so we need to get a divorce!” From that point on in the movie, there isn’t a whisper of just where he was or who he was with on his “vacation”. Yet a good half of the movie is devoted to proving to him the innocence of his wife.

In McLintock!, John Wayne and Maureen O’Hara are married and living together but basically separated due to her thinking that he has cheated on her. There are many scenes that show how his wife is remaining faithful (though the governor has been trying to go after her) and near the end when she accuses him of having had lipstick on his collar his response is to chase her around town in her underwear (through a couple windows too), catch her, spank her with a metal coal shovel in front of the entire town (with two grinning little girls in the front row licking their lollypops and witnessing what they had to look forward to in life) and then throw her into a horse trough. What was the outcome of such a display? She chased his wagon down as he rode back to the house, jumped on, and they both went in to the bedroom as Wayne turned off the lights and shouted “oh happy day!”

Now in both cases I think the point could be made that the director was just being subversive and showing the error of current societal mores. If it were Howard Hawks, I would be more certain, just take a look at Gentlemen Prefer Blondes to see subversive Hollywood mainstream cinema at its finest (or the films of Douglas Sirk). And after all, The Awful Truth was directed by the same guy who did Duck Soup. Maybe it is all just a case of the director trying to make the audience question whether the old adage “it’s ok for boys….” really made any sense.

Also, this aspect of these movies seems fairly minor. It would be easy to watch one for the first time and not think anything until someone brings it up and you are hit with a “wait a minute…were WAS he if he wasn’t in Florida!” thought. Is that a bit of present day male-centric hold over from the past at work there too? Because now that I think about it, maybe they do spend a fair amount of time showing that Cary Grant probably was cheating without ever proving his innocence.

Or were things so different back then that some people thought that it was ok for men to cheat and not women? The Awful Truth was made in the mid thirties, I could maybe see something like that (though I have no idea what the times were like then), but McLintock! was made in 1963, a time of women’s liberation and second wave feminists. This could just be that hoary old beast John Wayne’s influence; he was basically an anachronism by that time anyway.

A final thought is that maybe these are both cases of it being ok for Cary Grant and John Wayne to cheat. Because, let’s face it, the god of movie stars broke the mold on those two. They could burn down a doll house full of puppies and still seem awesome.

Bottom line, I don’t have a clear answer as to just what this reasoning was and it has always confused me a bit when I watch these films. On the other hand, The Awful Truth is one of the all time greats, and McLintock! is almost as much fun as going to the movies, so don’t let those feminazi lesbians keep you from watching them anyway! Pardner! 😉

I saw Mclintock when it first came out. The real story is that after Maureen O’Hara mentions lipstick on Mclintock’s collar after traveling to Denver he reminds her that she kissed him and left lipstick on his collar.
She offered to get im a new shirt but he declined saying it was only for an overnight stay anyway.

My wife (whom I met at least 12 years later) remembers it exactly the same way!!!

I remember that line as well and the last time I saw the movie that line was gone and I was surprised. I am sure it was there.

I don’t know, are you sure about that? I wrote this post a while ago, but I don’t remember him specifically saying that. If so, then I guess he’s off the boys will be boys shit list and half this post is invalidated 😉

I just saw it on Netflix and he didn’t say that. He said “so?” At her accusation, then chased her around town. Was the line cut? If not, the double standard alone is going to make me give this only one star … It killed the movie for me.

Yeah, I don’t think it was ever actually addressed from him.