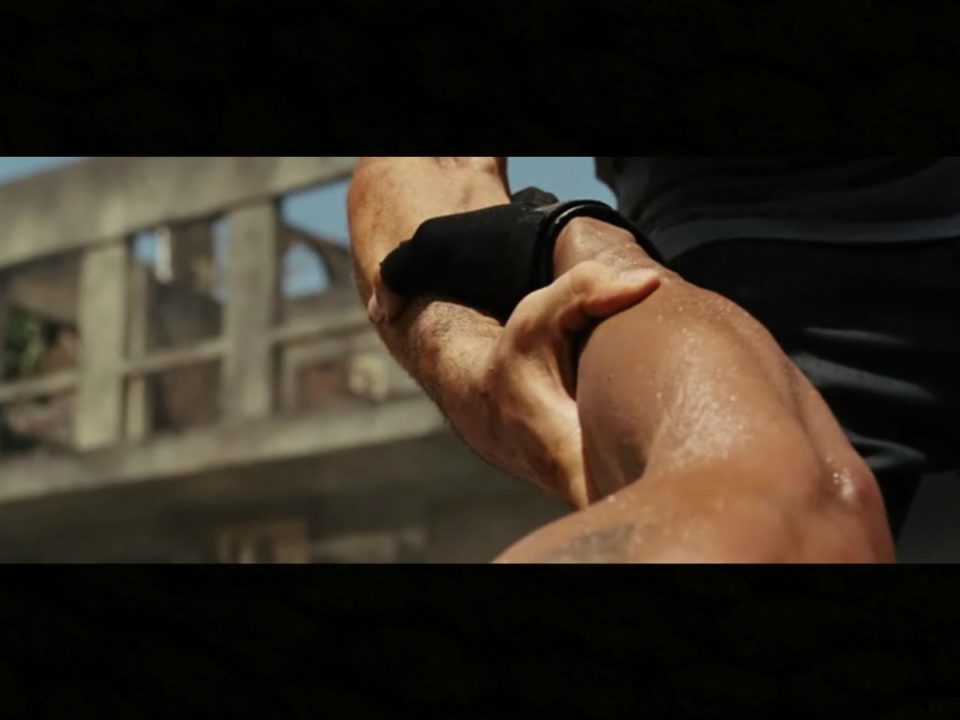 The Fast and Furious franchise has evolved over the last two decades from a testosterone-soaked fetishization of small-scale street racing to a testosterone-soaked fetishization of the joys of punching torpedoes into tanks. And, while the first film, for all its flaws, is probably still the best “film” of the series, it bears very little resemblance to the franchise in its current/final form. To see where all the world-hopping, muscle-bulging, physics-defying excess finally all clicks into place, you have to look at Fast Five.

Fast Five starts like the previous films, only more so–specifically, with Paul Walker’s “plan” to rescue Vin Diesel by using the brakes on his car to absorb all the kinetic energy of a giant prison bus moving at full speed:

Now, in no world would a speeding bus be flung high into the air without even moving the stationary car it hits (to say nothing of the fact that the prisoner they are trying to rescue from inside the bus is likely going to be pulped in the ensuing crash).  But Fast Five deftly positions this stunt in the opening minutes of the film as if to say “we are entering new territory where suspension of disbelief must be expanded to include physics-defying things beyond simply driving at implausibly fast speeds while in reverse.”  With these new non-Newtonian physics tucked away deeply in that part of your lizard brain that lets you accept basically any cinematic car jump, the movie barrels forward to a series of ridiculous and ridiculously awesome set pieces.

You saw a bit of this focus on story becoming merely a vehicle (if you will) to link together a connected series of set pieces in the previous Fast and Furious, but Fast Five fully commits to the simple delights of “and here’s another cool part.” Crucially though, Fast Five DOES have the necessary “in between parts” to maintain appropriate pacing of the “cool parts”–and the “in between parts” are not mere throwaways.  You might have heard that the Fast and Furious franchise is about FAMILY, but Fast Five was, in my opinion, the first FF film to triple down and intone the word FAMILY like it was Merlin’s fucking charm of making.  I don’t exactly know what Vin Diesel’s qualifications are for considering someone “FAMILY” (some of the familial inclusions here seem to push it…Tyrese), but, he says it with such conviction that I’ll go ahead and bite and give it a pass as a concept to build a series of increasingly implausible car stunts around.  Bottom line, the downtime is used well in this film, both in logically setting up the next set-piece, and in exploring the FAMILY theme (explicitly in the case of Paul Walker’s now-pregnant girlfriend).

Along with tripling down on the FAMILY theme, halfway through, the film also triples down on the low-key heists that have been in the background from the beginning of the franchise by saying “fuck it, let’s just call this what it is and go into full-on caper-mode.”  This turning point is marked with the obligatory scene of Vin Diesel explaining how they will need the usual assortment of heist operators, stopping just short of saying he needed “a Boeski, a Jim Brown, a Miss Daisy, two Jethros and a Leon Spinks.” And, even after watching the Ocean’s 11 movies, I’m still not sure what a “greaseman” is, but I assume that’s the role a ridiculously sweaty The Rock is playing in this movie.

And there you have it, the three pillars upon which all future Fast & Furious movies have come to rest: FAMILY, vehicle-based heists, and The Rock.  I’m not trying to sell Vin Diesel short by leaving him off that list here, his legitimately captivating (in a bassy tree stump kind of way) screen presence really is the thing that ties all these elements together (Paul Walker, on the other hand, proved he couldn’t carry a movie with the second outing), but the addition of a sweat covered Rock definitely bumped these films up a few notches.  And, let’s be honest, despite their off-screen difficulties, you could cut the sexual tension between Vin and The Rock with an acetylene torch:

You could play a pretty serious drinking game with the number of times they almost kiss in this movie.

And, last but not least, the final heist where two souped up muscle cars trash Rio by towing a ridiculously large safe behind them has to be one of the greatest action sequences of the last decade.  And that shit afterwards where Vin uses every last ounce of non-Newtonian suspension of disbelief to single-handedly take out every goddamn car on that bridge with the towed safe in order to save father-to-be (#FAMILY) Paul Walker?

Holy shit man…this is me, every goddamn time: 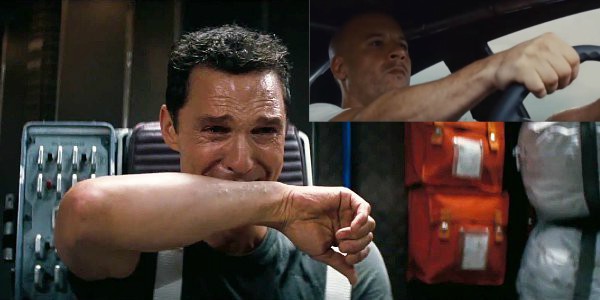 Director Justin Lin might work with trash, but he knows how to craft trash better than anyone in the business, and I’ll happily watch his brilliantly greased up, chest thumping, engine revving trash anytime.