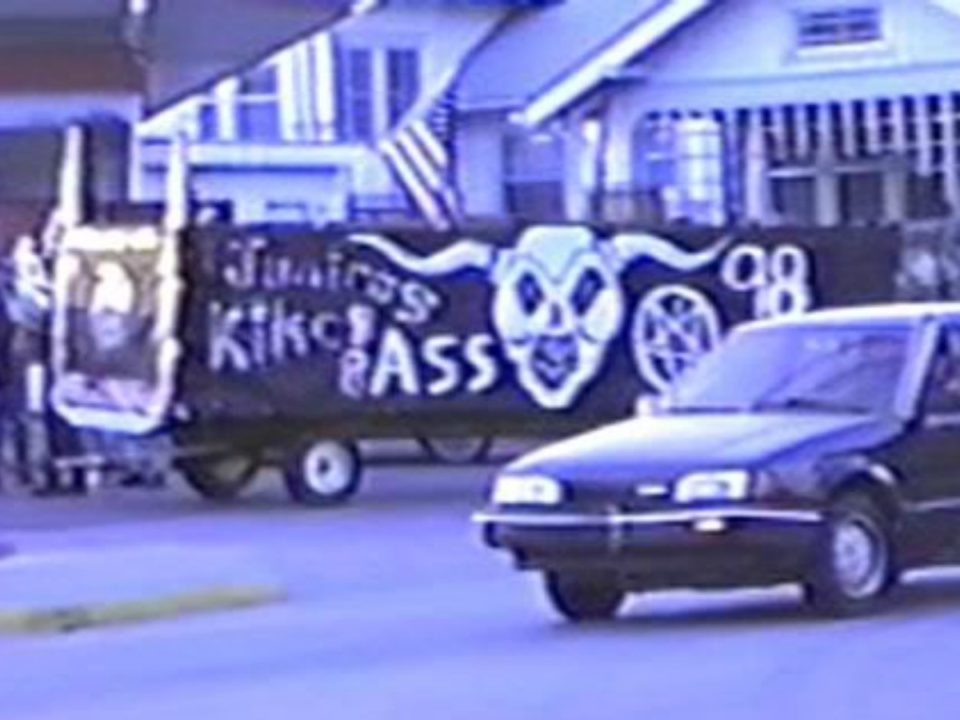 In today’s rousing tale I shall be looking back at the earliest incarnations of the “Float of Doom”. Now, I’ll admit, most of the inspiration came from watching Animal House at an impressionable age, but some of you may not be aware that The Float of Doom actually existed previously to its more mature (I use this word in the loosest sense possible) “college years” form. So in today’s and next week’s posts I will return to my years in Valley Center High School as I reveal the secret origins of The Float of Doom.

FLOAT OF DOOM I – Sophomore Year

Anyone who has read Jock Blog will know that I have a soft spot in my head for jocks. While dumb, closed minded, and…well…kind of dumb, jocks appreciate a good prank as much as the next guy, so I naturally gravitate towards their loutish ranks. All of this is merely explanation (sheepish backpedaling?) for how I found myself in the basement of one of our small town’s churches with the rest of the Sophomore class float planning committee in 1995.

However, they might have been my friends, but I quickly realized that homecoming parades are a lame lame thing to be a part of.  There were mostly girls, but a handful of the guys were there too.  To give credit where credit is due, I think it was when Jason Reffner said that we needed a cannon for our float that caused the schism that eventually led to the “float of doom”.  Anyway, the girls said a cannon was against the theme and before we knew it we had fallen into a full on frontier style battle of the sexes.  It ended with us guys deciding we were going to make our own float, and after stealing a bunch of supplies from the church we left to get started.

I won’t go into too much detail on this first float…it wasn’t particularly “doomy” (aside from the “stealing from a church” thing).  Basically, the girls made their float, us guys talked big about a cannon, and eventually made one and later we combined what both groups had for the homecoming parade.  The main item of potential interest about our sophomore year’s float was my idea for “hidden” signs to be revealed during the parade.  We spray-painted “Float of Doom” on to a giant sheet of cloth, rolled it up around a broom handle and once we got in the parade cut its ties and it unrolled over the girl’s sign that said “Valley Center Hornets are the 8th Wonder of the World!”  We also had hidden signs for the sides that unrolled to say “Sophomore BOYS are the 8th Wonder of the World” (I told you…Float of Doom 1 was rather lame, but hey, come on, we were 15, what did you expect??).

Sadly I don’t have any video or photographic documentation of this primitive Float of Doom, but like I said…it wasn’t really all that doomworthy.  Though I do seem to remember the girls were rather satisfyingly aghast that our hidden signs ruined their float.  It also firmly established two Float of Doom standbys: thievery and hidden signs.

I like to think of Sophomore year as a trial run, a proof of concept, a taste of things to come and an apocalyptic vision of what could be.  So by the time Junior year came around, I felt confident enough to try to see if I couldn’t make something a little more Animal House worthy.

My idea was to have a sturdy “battlewagon” defended by a nest of barbed wire with a working drawbridge with which to both launch assaults on and take refuge from the other floats in the parade (I’m not sure why I thought we needed such counter measures for the other floats in the parade, I probably overestimated their capacity for retaliation).  The sides would be covered with skulls and satanic imagery to strike fear in even the doughtiest of hearts.  Well it was a bold plan, and just barely missed coming to fruition.

I started by turning in some drawings of what I wanted the float to be.  I left off the barbed wire, pentagrams, 3 man slingshot towers and other such secret plans for the float.  Unfortunately the principle still did not like the idea of a plywood battlewagon with a giant skull on it in the parade…I had a lot to learn about what needed to be hidden in the pre parade stages.  So, after turning in a second set of drawings full of “All American Hornet” stuff (our theme) and looking less like a “battlewagon” we set to work.

We started by liberating a good deal of plywood and black tar-paper that had been kindly left out at some local rural construction sites.  These became Float of Doom staples, both for their sturdy, doomish look and their ease of obtainment.

The “battlewagon” soon took shape on my grandparent’s farm.  We coiled barbed wire all around the outside of the float, hammered hundreds of nails from the inside out to keep anyone who got past the barbed wire from climbing the walls (again, I may have been a bit over cautious with all the defensive measures).  We had a giant Danzig-like skull (which reminds me, the anonymous person who sent me the totally sweet Herzog shirt in the mail…well, it totally made my day, so thanks!) painted by my friend Brian along with a huge pentagram and slogans like “Rose Hill EAT ME” (our grudging nod to school spirit) and “Juniros Kikc ASS” (we thought it was hilarious to misspell it, but looking back I realize it kind of looked like “kike ass” instead which is less hilarious and more inadvertently racist).

We thought if we were able to get the float to the parade and it wasn’t “too” offensive (we had rip away sections of tar paper covering the pentagram, “ass” and “eat me” to unveil during the parade) they wouldn’t be able to turn us away at the last minute, so I tried to avoid having our Junior class sponsor show up for as long as I could.  But eventually the word came down: under no circumstances would they let a float into the parade that had not been given the ok from our sponsor.  So we quickly removed the barbed wire and found a flag (for the “all american hornet” theme) and painted a peace sign on one side.

Unfortunately our Junior class sponsor Ms. Hall was having none of it.  She wasn’t a bad lady actually, I have plenty of teachers from back in the day who were awful in every possible way (hi Ms. O’shea and Ms. House!) but Ms. Hall meant well.  I’m not sure why I was so “spirited” in her Junior English class, but I’ll go ahead and say it: “I’m sorry for stealing your doorstop every day, and for stealing all your copies of Jonathan Livingston Seagull, and for bringing that universal remote to class every time we watched a movie, and for putting chalk in the erasers, and for constantly hiding your lesson book, and for setting your overhead projector on fire, etc etc…”

Anyway, Ms. Hall showed up, said an emphatic “NO” (many times).  Of course we decided to take the float to the parade anyway and parked it in Jimmy’s dad’s gas station which was right on the parade route.  It was a minor victory, the skull and pentagram at least stopped traffic for a while and made an amusing counterpoint to the rest of the floats.

Anyway, I try to find some kind of artifact for each “spirited tales” post, and this time it is the home video taken by my mom during Ms. Hall’s ill fated visit to inspect the float along with some brief footage of us at the parade.  My mom is filming everything, and doing her best to try to keep us out of trouble despite our every intention of getting into trouble. That’s my grandma’s voice in the beginning, my brother is the young kid and my sister is the girl in the red velvet pants.  Then there are my unlikely friends and I desperately trying to find some way to sneak our battle wagon into the parade while Ms. Hall says no over and over.

I will say that the senior homecoming video I’ll post next week is pure epic anarchy and makes this one seem a little tame, but this video is of minor amusement value if you find a bunch of young punks trying to “test their limits” amusing.  Also, the spectacle of that giant pentagram in the middle of small town America is rather amusing, especially since I don’t think anyone knew what it actually was…  So, here you go, the only surviving video evidence of the second annual FLOAT OF DOOM!

That’s it for now! Tune in next week to find out what happens when a Float of Doom actually makes it into a parade with Float of Doom 3 – Senior Year! There are bombs, wanton destruction, fireworks, and plenty of youthful exuberance. It’s fairly epic if I do say so myself.

I can’t help but feel that had we known each other in high school, we might have been the best of friends. 😉