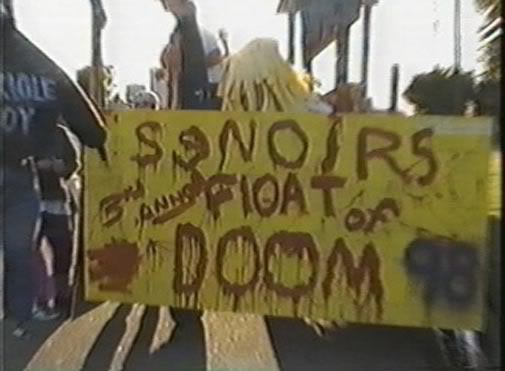 In today’s rousing tale I will finish my “Float of Doom – The High School Years” saga. Junior year we didn’t make it into the parade…Senior year our float got admitted and Hell got admitted with it. Anarchy reigns in the epic conclusion that shows just exactly why I can’t have nice things…and why Valley Center High School cancelled their homecoming parade the following year.

With two years of “Float of Doom” experience, I figured I had a pretty good idea what I wanted: skulls and stuff, complete anarchy a la Animal House during the parade and good use of my newest discovery “dry ice bombs” (fun science experiment kids, put dry ice and water into a two liter bottle and then run away…it makes a pretty good explosion!)

By Senior year most of my classmates had gotten kind of used to the “Float of Doom” idea and there were no more splintered float-making committees, so after “acquiring” the usual supply of plywood and black tar paper we quickly set to work. The new homecoming theme was “hornets at the movies” or something so we just said our movie was “The Exorcist” and filled our float full of guillotines, grim reapers and stuff. We had big plans to make the head in the bed vomit but never quite got around to it.  Again, the idea was to make something as far from the standard paper flowered school spirited float as we could while still playing along just enough to get into the parade (which, due to hazy knowledge of the exorcist movie (and thus no one being able to say we weren’t sticking to the theme) our sponsor gave us the “OK” this time around), and once into the parade cause as much chaos as possible.

Somewhere in there the Junior boys decided they wanted in on the potential mayhem. After approaching us they agreed to form an alliance and broke from the Junior girls making their own float full of fireworks, water balloons and flares.

From here on I’ll let the video tell the story.

That’s our homophobic, racist, Chemistry teacher Mr. Gleason in the beginning somehow not realizing what the dry ice and two liter bottles were going to be used for. I’m the guy filming (and yes, I realize it makes the Bourne movie fight scenes look like they were shot by Ozu, what can I say, I was excited and it was in the days before image stabilization) while many Float of Doom I and II stalwarts worked on filling the dry ice bombs and lighting fires. I’ll also add that no children were hurt during the parade despite things maybe being a tad out of control in parts (and yes the bomb went off in that guy’s hand, and yeah, it looked pretty awful afterwards but no permanent damage was done).

Finally the anarchy reached a perfect fever pitch of intensity when the senior class as one just started running to destroy the other floats. I don’t think anyone in particular started it, everyone kind of just realized it was the thing to do and as one mind we all jumped out of the truck and basically destroyed every other float in the parade. So, yes, it was a rather shameful display for all the children that came to see a nice parade, but aside from that minor issue, it was pretty epic and I actually felt a twinge of “class of 98” spirit at that moment.

The video ends with the sad spectacle of a bunch of demolished floats parading past the big crowd waiting at the end of the parade route. Look closely and you can see a rather upset Ms. Hall from last year’s float video in the Junior Girl’s float truck. Anyway, that’s pretty much what you are looking at, so without further ado, check out the massively brutal Hornetpocalypse yourselves:

In the end, the powers that be called it the most “disgraceful display they had ever seen” and I was sent home from school the next day to bring them the video footage so they could determine just what exactly had happened. Though, after looking all morning I was “unable to find the tape” and no somehow no punishments were given. However, after much discussion with the school board it was decided to cancel the homecoming parade the following year. Of course, by then I was off to try my float designing skills at the University of Kansas…

…but that is a story for another time!

Ah, high school…I remember engaging in all kinds of behavior that upset the powers-that-be, and each time they seemed so mortified, so convinced that something truly terrible had just transpired. And now? Nobody remembers ANY of it, though I’d imagine the same stick-in-the-mud faculty is still trying to convince rambunctious high school kids that everything they do in high school will somehow follow them the rest of their lives.

Your devotion to anarchy is appreciated, good sir.

1) This rather reminds me of the “teens record video of themselves robbing liquor store” headlines you see now and again. Leave no witnesses, no? Also, I’m a bit surprised that you were filming rather than participating directly in the carnage.

2) On the other hand, without you filming, this gem wouldn’t have been preserved for the historical archives. Watching it is like watching the Star Wars prequels: we are witness to the rise of the Dark Lord.

Technically this was the most successful Float of Doom in terms of “ruining it for everybody”. But I’m just as concerned with getting attention and the college years floats got more press coverage I guess.

But yes to both of you, without people like me constantly talking about “the big game” (or “the big prank”) no one would ever remember what happened in high school!