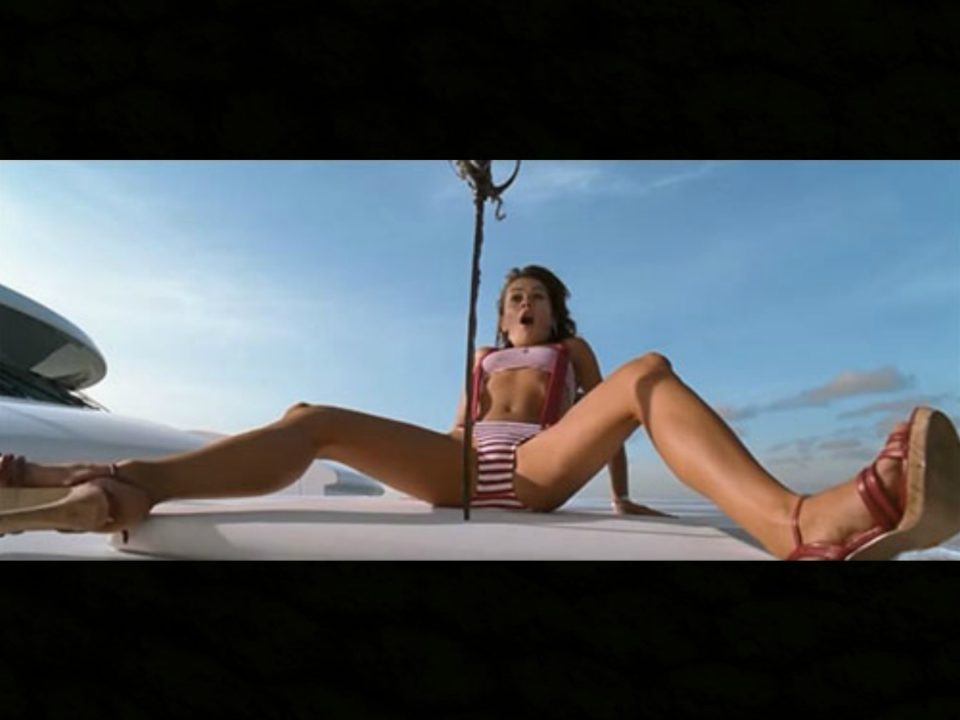 Today’s post started while I was sitting around recently, just letting my mind wander.  My thoughts were flitting around like a barracuda in a mangrove forest until, like a Ceti Eel, the words “I’d like to watch Fool’s Gold again” wiggled their way into my head.   Perhaps it was only a desire to remove the nasty taste of Mathew McConaughey’s execrable character in Contact (which I only watched for the first time recently), but, no matter the reason, it was a thought I’d had, and now it was time to own up to it.  You see, I’ve already seen Fool’s Gold a whopping THREE times in recent years.  To be clear, this is Fool’s Gold, the most shirtless and bimboriffic of all of Mathew McConaughey’s movies before his respectable turn of the past couple years.  I hadn’t been forced into watching it; I’d actually willingly sought it out, even dragged friends over to watch it with me.  And still, somehow, I wanted more.  This blog, if nothing else, is my space to own up to my horrible artistic appetites (just wait till my “Best Metal of 2015” list comes out in a few days), so why not brand this film what it really is: one of My Favorite Movies.

Now, whenever I toss in a token “low art” film, I always start with the bad.  Like clearing a fart out of a room, soon all that is left is merriment and laughter.  In the case of Fool’s Gold, there are a few juvenile pratfalls too many, but otherwise, this movie doesn’t put many bare feet in the wrong beach.  Sure, McConaughey looks like a bronzed greasy penis for most of the film, utilizing his signature close talk to off-putting effect.  And sure, the script is a bit too full of references to his sexual prowess to distance itself from the vanity project territory in which it most certainly belongs.  However, these “issues” are really a large part of the charm.  This specific time period of McConaughey’s oeuvre was dedicated to his status as the ultimate Himbo; a man of pure body odor and abs frolicking through a tropical paradise where the only thing that shines brighter than the Caribbean sun is his own teeth.  To watch him working under a competent director in peak McConaughey form is a sight to behold, and one of the greatest joys a cinephile can experience.

And then there is Kate Hudson, that tragic figure who possesses untold depths of talent and yet she has still never made a good romantic comedy (aside from this one if you want to label it as such).  Luckily Fool’s Gold was made by one of the all time great romantic comedy directors, and she was finally given a chance to shine (with a golden bronze hue only slightly less ridiculous than the amply ridiculous promotional poster for this film).  It is a shame she was stuck in so many bad movies, because Kate Hudson honestly is one of the greatest and most likable actresses ever to grace this genre with her presence.

But really, what is so disarmingly charming about this movie is simply the world in which it takes place.  This film is set in a magical land called The Caribbean.  A place where one can see all the way to the bottom of the crystal clear sea no matter how deep it is.  A place where the temperature is always 73 degrees and it’s always Saturday.  A place where great adventures/treasures lay waiting to be discovered and the random encounter table is almost entirely populated by friendly rich people waiting to bankroll your vacation adventure/treasure hunt.  There’s no need to turn your brain off for this one, by all means turn it on.  Let the technicolor marvels that play before your eye like an Australian’s acid flashback flow through you.  Fool’s Gold is the kind of entertainment that can only be achieved when a director is desperately attempting to make a GOOD movie, but could give a shit if it is a RESPECTED movie.

Not that everyone will understand this film.  I first heard of it in 2009 when I returned to a girlfriend’s appartment at the end of a “girl’s night” that she had hosted.  Five women had all watched this movie, and had spent the rest of the evening trashing it in no uncertain terms.  I took one look at the cover of the film and, just like the first time I saw a Burn Notice trailer, said to myself “Isley old boy, this warrants further research.”  A few months later I secretly downloaded and watched it myself, and, as they say, it had me at torso.  All of which has led to my attempt to explain my love of Fool’s Gold today.  Fully explaining the appeal of this film may be an impossible task.  For example, Sahara is a film from the same time period, built around similar themes, that is pretty much a better and more entertaining film in every way.  But, bottom line, I did not find myself thinking “I’d like to watch Sahara again” the other day, and that’s really probably all that needs to be said.