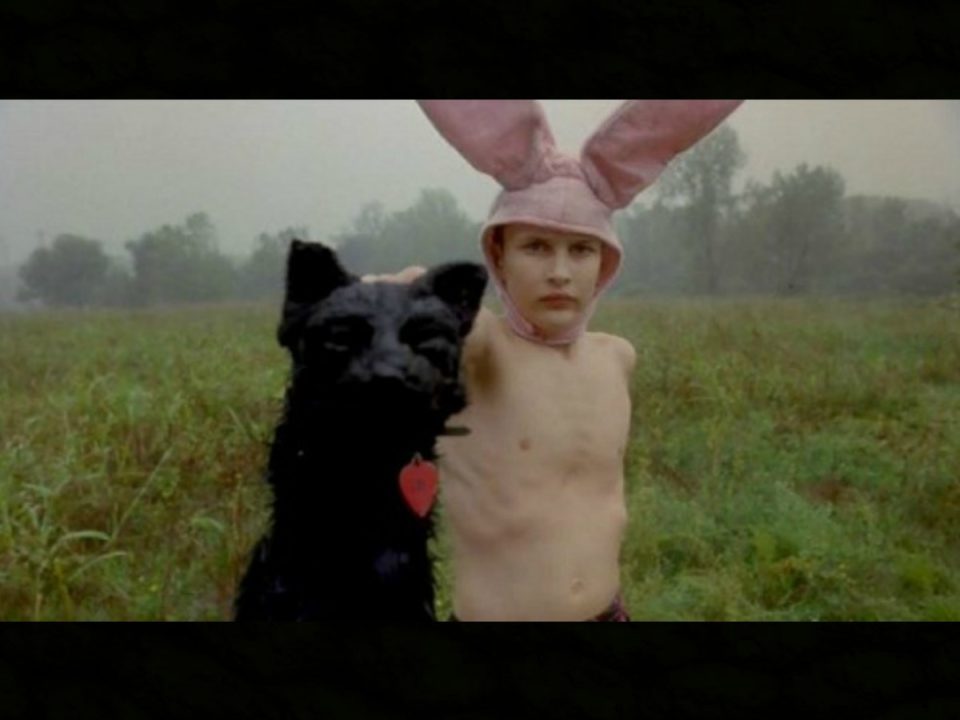 Gummo is a movie people either hate or love.  Or, more accurately, Gummo is a movie people either hate, or are apologists for–and today I guess I will be taking the apologist tack.  After all, I understand the complaints, I won’t even argue that they are unfair.  Hell, I even wavered back and forth about featuring the movie here today while rewatching it in preparation for writing this post.  But, either despite or because of its faults, I have to admit that Gummo is a pretty impressive bit of filmmaking from one of America’s most gifted (and insufferable) filmmakers.

The chief complaint most people have about Harmony Korine’s films is that they are basically just cheap provocations.  And, to be fair, anyone can provoke a reaction by filming the shooting a comatose elderly woman with a BB gun before pulling the plug on her life support (meanwhile, a true master like Eric Rohmer can provoke a reaction by portraying someone finding a lost necklace). Gummo is full of such cheap provocations to be sure.  Just look at the header image for today’s post, one of the final images of the film, it’s a rather perfect metaphor for the “subtlety” that one can find in Gummo: a young boy thrusting a dead cat (that has been shot repeatedly with BBs) straight into the viewer’s face.  I’m not going to claim that there is much deeper meaning to Gummo’s more unpleasant images, they are, in many cases, exactly the kind of cheap shots you expect the kind of guy who is able to articulate himself in interviews THIS WELL would take.

And yet, kids huffing glue and torturing cats actually has a certain truth to it.  This film is a portrait of small town squalor, a dirty Polaroid of the kind of filth that lies piled up in all the forgotten corners of America. This is a movie that understands the brilliance of that Jack Dickson video on youtube that I wrote about a while ago. Not that is it ALL casual racism and cat torture.  I would argue that scenes like the following clip are actually far more viscerally intense than the opening shot of the kid drowning a cat in a barrel of water:

And, unlike the opening cat drowning scene, that kitchen fight scene actually appears to be completely real.  In a short 90 seconds something inherently and nastily human is articulated in excruciating detail.  People really do act like this, trapped within their own vicious behavioral flowchart, unable to escape their almost hard-coded behavior. Maybe you know people like this, or, if you allow yourself that level of self-examination, maybe you are someone like this, albeit in a less face-punchy manner.

The other big complaint about Korine is that he takes advantage of the various mentally challenged subjects he shows in his films.  And though I can’t speak to the level of compassion that he may or may not have towards his subjects (I actually suspect he has a bit more respect for them than most of his detractors would), his use of outsiders is typically the most refreshingly honest thing about his films.  I really do think he captures something much closer to truth than most filmmakers are able to with this kind of half improvised, half scripted movie.

For instance, there is that segment about the girl with down’s syndrome who is being prostituted out by her brother.  And while that is an eye-rollingly obvious  bit of provocation, it also leads to a really fantastic (and even rather sweet) scene between her and the 12 year old who has paid to have sex with her.  Or, the obviously mentally handicapped girl who shaves her eyebrows in a long unbroken cut while giggling vacantly.  I would argue that Korine films the scene without an ounce of condescension. Or even the brief shot of the deaf couple in a fight at a bowling alley that really gets at something primally human with their interaction.  Say what you want about Korine, but these are all powerful images, for the most part unequaled in contemporary cinema.

Gummo might at times be an immature work (the recurring motif of the child in the rabbit ears reeks of the kind of pretension young artists eventually outgrow), but it has a kind of idiot savant genius nonetheless.  Even the obvious moments like the disgusting bathtub supper scene make great cinema, and as a slice of brilliantly edited images of American squalor, there is a truth to the movie that makes it rise above any potential limitations of its more juvenile impulses.

Also, it has a great soundtrack.  Burzum, Bach, Mystifier, Madonna…I’d probably love to talk music with this Korine fellow since he likes every one of my favorite bands apparently.  It’s just too bad he is probably such a tool.

Thank you for fully removing any desire I may have had to watch this movie.

I seem to remember thinking that I liked Julian Donkey Boy better, but I don’t really remember either of them quite well enough to say WHY, and there’s no fucking chance in hell I’m ever watching either one again, sooo…the world may never know.

(Though actually I think it’s because I decided that Julian Donkey Boy was SAD or SWEET or something? Where as Gummo is just gross with no redeeming niceness to it? Though you do seem to be saying here that that’s not true, so…maybe I just really really really hated the bathtub scene.)

Also: what did you think of Spring Breakers!!! It looks SO DIFFERENT. Is it? I can’t believe it actually is, right?

Yeah, I think it’s fair to say Julian Donkey Boy edges Gummo. Sometimes I think I lean Gummo just because it seems more unscripted. It’s easy to forgive Harmony Korine taking cheap shots with rednecks fighting tables if that’s just what his camera captured. Though if it’s something like a dude stealing a dead baby from a hospital it seems easier to call foul. Though, Ewen Bremmer was great (as was Herzog!) I don’t know, they both have their strengths and weaknesses, hard to pick one as “best.”

Spring Breakers was kind of brilliant! I just shat on Korine when he goes “scripted,” and his past experiments with more scripted movies (namely, Mr. Lonely) kind of blew, but Spring Breakers was great. One review called it “a girls gone wild video filmed by Terrance Malick” which was pretty spot on…if you doubt me just check out this, the most cinematic scene of the year, using this months minor key monday song for the montage: http://www.youtube.com/watch?v=CdD1P6sswQY