How I learned to stop scoffing and love Captain America. 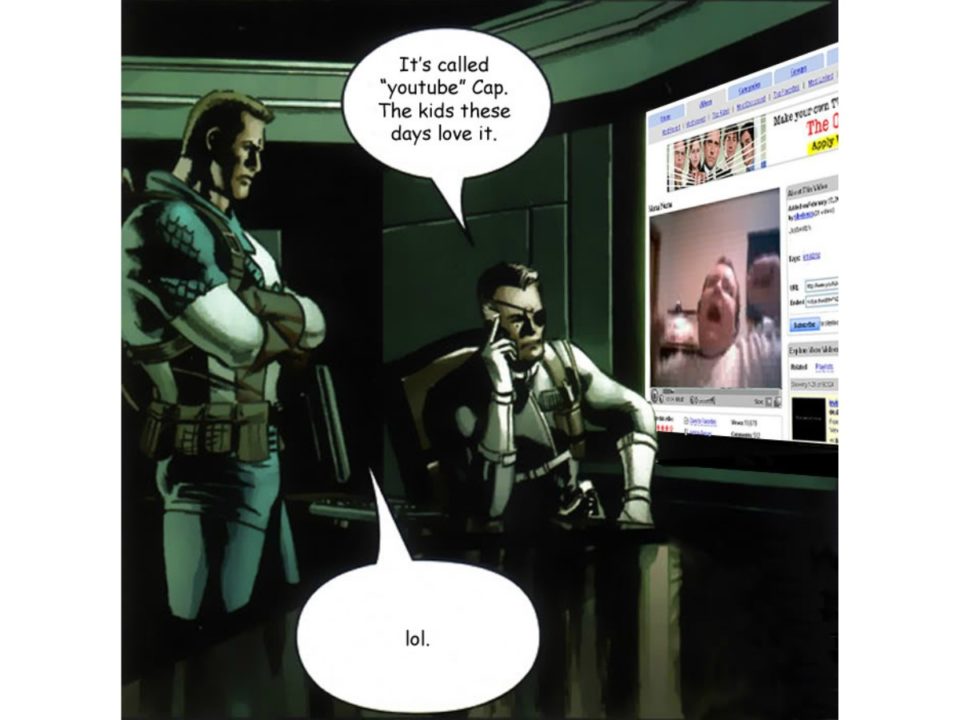 Having never really read comics until about two years ago, I’m pretty new to all this comic book related stuff. Prior to jumping in headfirst, I only had a vague idea of who was who and what they were all about in comics. Batman? Dark and kicks ass…seems cool. Spiderman? Smartass and sweet powers…seems cool. Captain America? You gotta be kidding right? Flag thumping, lawful-good, moralizing “do-gooder”…LAME. But as I actually started reading his books I have come to realize that I couldn’t have been more wrong. So here are a few quick reasons why “Cap” is totally badass and/or sweet!

To start, in case you are unable to use wikipedia, (or, more likely, unwilling to read a whole article on Captain America…though if that is the case I doubt you are reading this either–but I digress) the quick back story to Captain America goes like this:

98 pound weakling Steve Rogers wants to fight the Na-zi menace but fails the physical. A kind scientist convinces the recently rejected and vulnerable Rogers to volunteer to test his dangerous and experimental super soldier serum on himself (quick aside…does this seem a little unscrupulous to anyone else?) The serum transforms Rogers’s body to operate at the peak of human physical perfection (a condition that seems to go around quite a bit in the world of comics). Sadly (conveniently) the scientist is immediately killed by Nazis making Steve Rogers the only living person (not really, but close enough) who has successfully taken the super soldier serum.

Rogers then takes the name Captain America and goes off to fight the German menace in World War 2. After many totally sweet missions he is seemingly killed trying to disarm a rocket over the ocean. As it turns out, he was only frozen in ice for half a century (give or take thanks to Marvel’s “sliding timescale” policy) and upon thawing takes over leadership of the premier Marvel superhero team “The Avengers”.

This leads to one of the most interesting aspects of the current Captain America character, the idea of Captain America as an Anachronism. He is the archetypical Rip Van Winkle, asleep for fifty years, the world he has woken up to is very different than the one he knew. His old friends are either dead or in their seventies. The “dames” have tattoos, the music is full of cursing and people yell at him for not knowing what myspace and youtube are (as he was unconvincingly scolded in the final issue of the subpar Civil War Frontline). As I have alluded to in my previous blog post, America was a very different animal after World War 2, and in this sense, the patriotic young Steve Rogers that is transformed into Captain America fights for the “good old fashioned America” of Westerns and apple pie.

This is what makes his “flag waving” bearable. Captain America is no politician. As a newsreel figurehead from World War 2, he turned into a symbol for all that is American. He supports his government as long as it does what is right for the American spirit. But as Captain America has found out more and more after his resurrection, America is no simple place, and knowing just what “truth justice and the American way” are in today’s world is no simple task. This dilemma has created a lot of great storylines for Captain America, far more complex and interesting than the old “Stop evildoer! I represent America and we don’t stand for that kind of thing!” stuff that I had always assumed was the standard for every Captain America
storyline.

Finally, as if being an ideologically conflicted anachronism isn’t sufficient to make a cool character, Captain America also borrows one of the foundational aspects of Batman’s allure. When it comes right down to it, Cap is just a dude that works out a lot too. Sure, he’s the “performance enhanced” Batman, but there is just something appealing about a superhero that doesn’t “really” have superpowers. Superman might be indestructible, Hulk might be the “strongest there is”, but Batman and Captain America…hell, in theory any of us could be them. I mean, Captain America can “only” benchpress 1100 pounds and he can run a 1 minute mile…that’s not totally inconceivable (well maybe the mile thing is). And he just uses martial arts to take out super powered foes (even the hulk went down to a pressure point strike). Superheroes are one thing, but superheroes that are “human” ability wise are somehow more appealing to the rest of us. Tarzan, Conan, Batman, Captain America…a few more hours at the gym (and a bit of juice) and we could all be them!

So, to my pleasant surprise, Captain America turned out to be a pretty interesting character once I started getting into comics. A large part of this is of course because good writers are writing his books, but still, there is a lot of potential there and I should not have judged him so quickly without reading his books first.

For good recent Captain America books, I can’t recommend “Ultimates 1” and “Ultimates 2” enough. The Ultimate line of comics (confusingly the same name as the books I just recommended–The Ultimates is the “ultimate” version of The Avengers) has all the iconic characters and teams start fresh in new non-canon stories. In other words, perfect for new readers. His “ultimate version” is a bit more powered (taking down hulk, judo throwing a 60 foot tall dude) and is more focused on the anachronistic aspects of his character, but the series almost as fun as going to the movies. “Captain America”, his “real” (marvel universe not ultimate) solo series is also fantastic too. A more gritty, espionage centered book, the writing art and characterization are all top notch. The New Avengers (“real” Marvel Universe version of the Ultimates) is also great. Not as much focus on Cap (as it is more of a “team” book), it has still been of uniformly high quality. Finally, I have been very pleased with how Captain America was handled in Civil War (even in Civil War 7…I don’t care what you guys say!) This series is all about the “ideologically conflicted” Captain America, but aside from a few possibly heavy handed moments, I give it a thumbs up. So go read some “Cap”! (also, if you don’t like spoilers, don’t watch any news programs, read any newspapers, talk to any comic book fans or leave the house until you read all of the above books)