IMM 15: Clearing up Memetic Confusion Via Monty Python and the Holy Grail Quotes 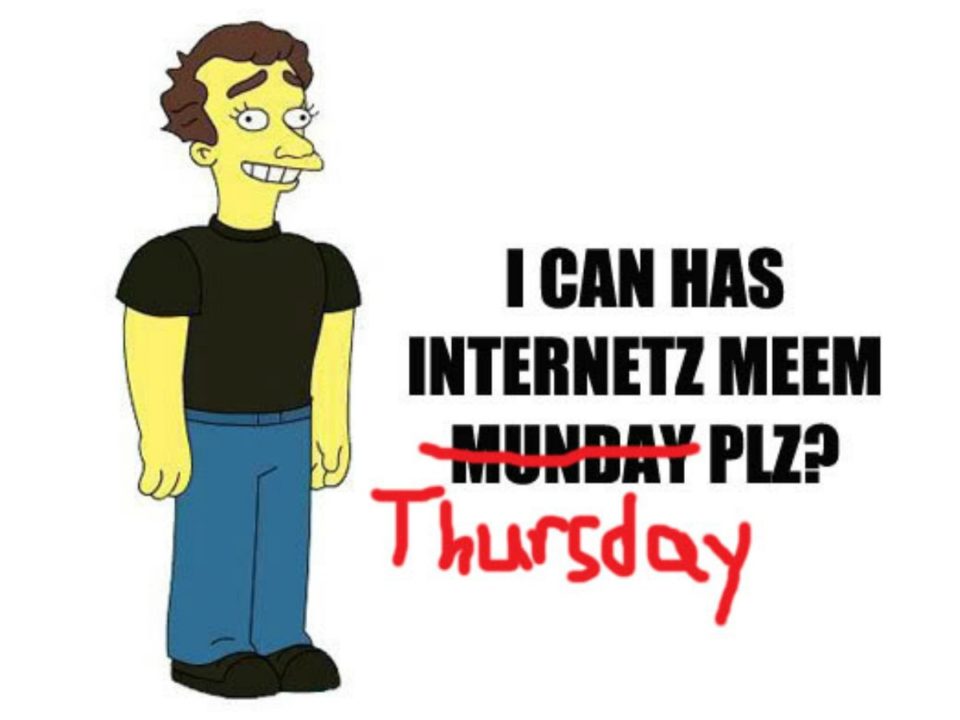 On the agenda this month?  I use the second most quotable movie in the world (after Ghostbusters) to point out the differences between three sets of commonly confused memes!

As memes proliferate around the web faster than even the most dedicated imgur viewer could ever possibly keep up with, it is inevitable that the memes will begin to be confused by the content creators of the web.  This memetic confusion is a natural enough byproduct of an internet that is bursting at the seams with exploitable images, just waiting to be turned into the next hot forwarded item by anyone with access to the Impact font.  It is also a natural part of the evolution of these memes, if enough people make the same mistake, the meme will take on a new meaning.

Today, I want to look at 3 sets of image macros (ie, images that are used for comedy with the addition of humorous text, often in a setup/punchline format) that seem to generate a lot of memetic confusion.  Today’s image macros are all members of the “advice animal” subset, which is to say that they all feature a character (animal or human) whose personality supplies the context for the setup/punchline text.

Because this personality is so vital to the jokes, a confusion on the subtleties of each personality can easily ruin even the most well intentioned of user-created memes.  Thus, today, I will use quotes from that classic bit of Medieval silliness, Monty Python and the Holy Grail, in an attempt to hopefully clear up some of this confusion.

Why Monty Python and the Holy Grail?  Well, first and foremost, the kinds of nerds who make these internet memes all know the movie by heart, thus, it provides a common ground of cultural understanding to draw from and thus eleminates the chance for any further confusion.

And second? Well, it’s super easy to make memes out of anything, and Monty Python and the Holy Grail is fucking hilarious: 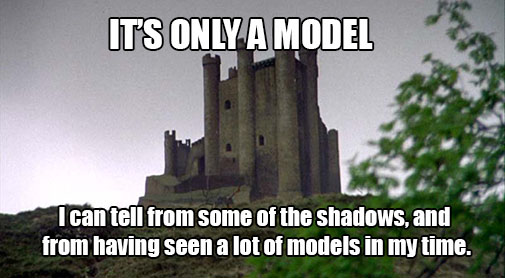 Still, we’re not talking about the “This looks shopped” meme, we’re here to talk about advice animals, so on with the examples!

Courage Wolf, coming snapping on the heels of the original “Advice Dog,” was one of the very first of the advice animal image macros.  It also happens to be one of the lamest.  In its initial formulation, Courage Wolf  was just a wolf head on a color wheel background that would shout jock aphorisms like “Pain is weakness/Leaving the body.”  His whole shtick was that he was a wolf, and he happened to be courageous.  Thus, if one were to make a Holy Grail themed Courage Wolf, it would go something like this: 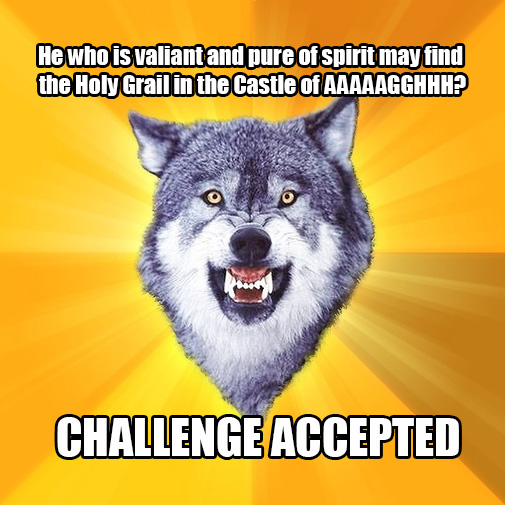 This “Courage Wolf of Aramethea” finds out that this castle (or something on the way to it) is so fearsome that one can’t even finish saying its name.  And then, rather than shouting “run away,” he meets the challenge head on.  Not necessarily insane, but, at the very least, it’s pretty brave.

The problem with Courage Wolf is that, unless his “courageous” actions get kind of ridiculous, they really aren’t all that funny.  And courage taken to ridiculous levels?  Most people call that insanity, and for that we have Insanity Wolf.  And though most insanity wolf memes tend to be excessively violent and/or rapey, they are all undoubtedly insane.  Much like the famous Black Knight: 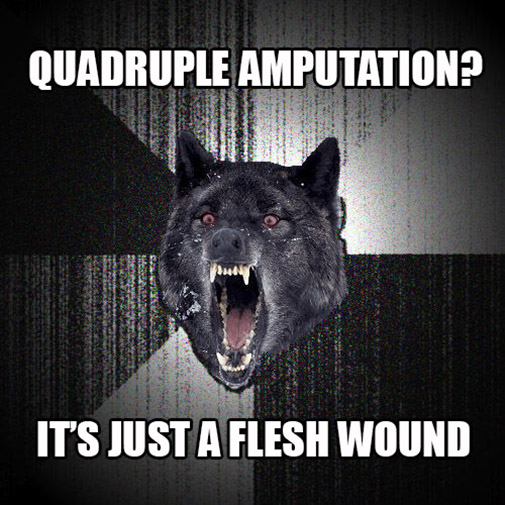 The distinction here is really quite simple.  Just ask yourself, is there any situation where considering someone chopping all 4 of your limbs off “just a flesh” wound could be called courageous instead of insane?  If not then Insanity Wolf is the meme you are looking for.

Of course, with all their running away, the kanigits of Monty Python really need a Cowardice Wolf to accurately depict most of their actions, so I went ahead and mocked up an example of what a Cowardice Wolf would look like: 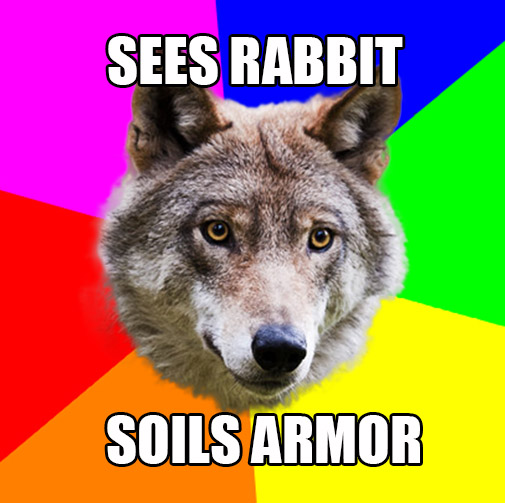 A lot of people seem to miss the subtleties of these four memes, many even claim that they are in fact the same meme.  And yes, while all four of these characters point out things you might not have immediately realized, they all do it in different ways.  For each of them, I figured I would use the “list of things that peasants think float” from the famous witch burning scene to draw attention to the finer points of each character.  And for those who somehow don’t have it memorized, here is the list of things that a group of witch lynching peasants responds with to the question “what also floats?”

And now, let’s see what these memes have to say about all this! 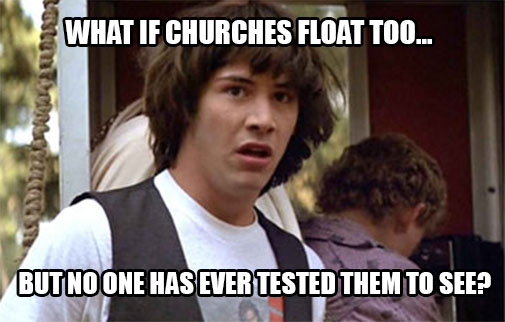 I mean, yeah,  a wooden church thrown into the water roof first would probably float, but only Conspiracy Keanu would think this deeply about the subject and then make that face when he comes to his moment of clarity.

Speaking of clarity, our next character is “Sudden Clarity Clarence.”  Though his face seems similar to Conspiracy Keanu’s face, he is not experiencing a paradigm shifting realization about a secret (and, importantly, incorrect) way in which the world works, but rather, extreme shock that he could have overlooked something that in retrospect should have been obvious.  Often, these work best if they are things that people don’t usually think about and don’t really matter anyway, like “Oh my god…I never shampoo my eyebrows.”  Thus, for my Monty Python example I give you Clarence remembering his high school science lesson about surface tension after initially dismissing the fact that very small rocks could float: 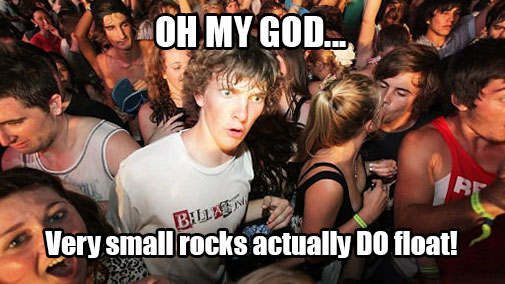 The next character, Morpheus, is actually one that I could potentially admit really is indistinguishable from Sudden Clarity Clarence.  Both of their realizations are quite similar, some obvious fact about how the world really works that really should be obvious if you think about it.  Yet the intent is different.  With Morpheus, it is more of a sarcastic “you do realize are stupid for not already knowing this right?”  With Sudden Clarity Clarence it is more of a “hey, it’s funny that we never think about this right?”  Thus, for Morpheus, I chose this picture: 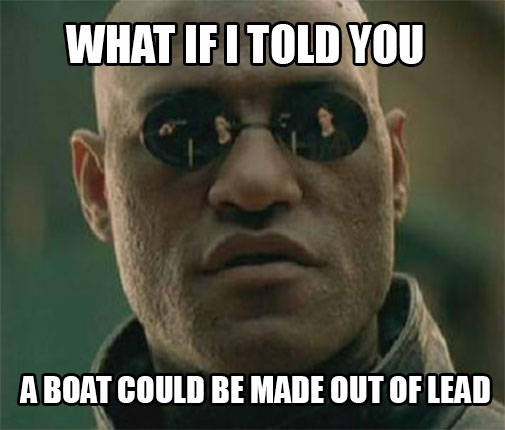 Hell, for that matter, a boat could be made out of very small rocks too I guess.

Finally we have Philosoraptor.  He’s a philosophizing dinosaur.  That’s really about it.  Many of his philosophications take the form of realizations about how the world works.  However, none of the above examples are really “philosophy.”  Even Conspiracy Keanu’s–“they never tested it” doesn’t exactly count as rigorous philosophy.  So, if you want to make a philosoraptor realization meme, you will need to apply some faulty logic at the very least: 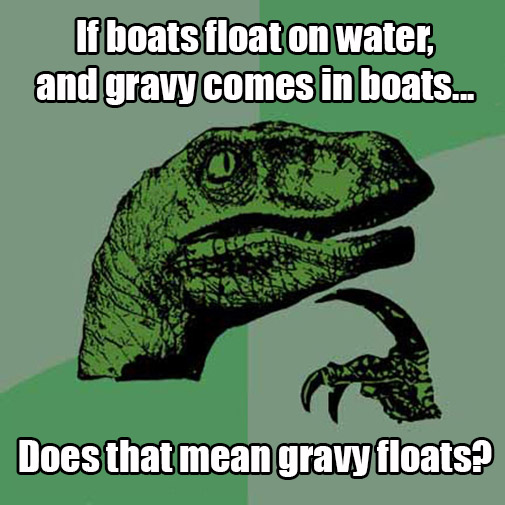 I tried to do some research on this one actually, and couldn’t figure out if gravy floats or not.  I mean, it’s fat, but it also has like chicken solids and flour in it right?  I found a few densities listed for some canned gravies online, but they all seemed to be the same as water.  You better believe that next time I make gravy I’m totally going to see if it floats or not.

The Most Interesting Man in the World / The Old Spice Guy

Both of the next characters originated in TV commercials.  And though they share many similarities, they are still distinct characters.  The “Most Interesting Man in the World” is just that, some kind of mixture of Ernest Hemingway and J. Peterman from Seinfeld.  He’s full of wild tales of adventure, is a Jai Alai champ, and while he doesn’t always do things, at some point he has done everything, and done it with style.  The style is the key, he hasn’t just done an interesting thing, he’s done the interesting thing in an interesting way! Thus, he has undoubtedly taunted people (at least for a first time), and taunted them with style: 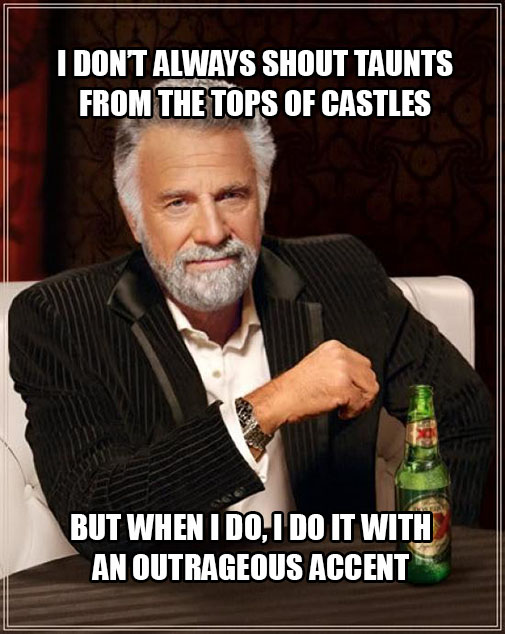 His spinoff, The Old Spice Guy, aside from being aimed at women rather than men (with his whole pitch of “don’t you wish your man could be like me”), is more of a series of badass non sequiturs than an old school man of the world.  He could have, in theory, done any of the things The Most Interesting Man in the World has done, but the presentation is different.  And, importantly, they are just presented as simple statements of things he has done.  When he does something, he just says he is doing it, he doesn’t go into some long story about how it is different from how everyone else has done it.  A simple statement like “I’m on a horse” is not nearly interesting enough for The Most Interesting Man in the World, but it works for The Old Spice Guy: 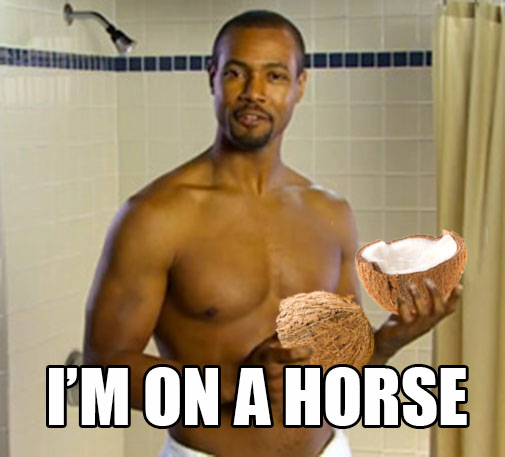