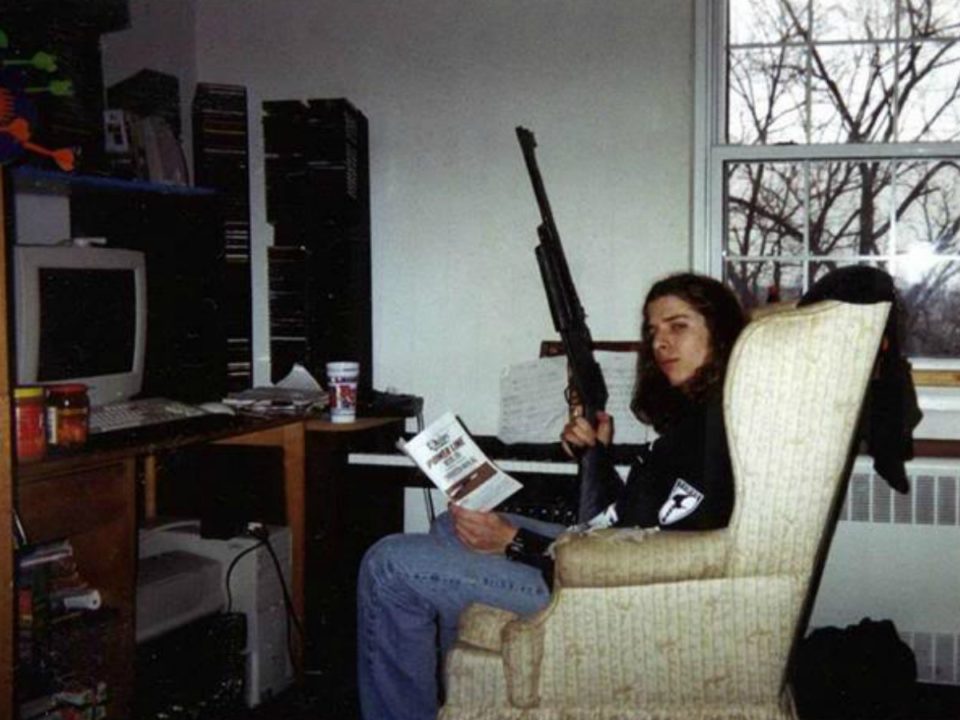 Today’s post was discovered while sorting through some folders buried on my hard drive. The basic story is that upon buying my first bbgun (pictured above reading the instructions) I decided to set up a shooting gallery outside my room’s window and used to get a great deal of enjoyment out of shooting at things next to people who would walk by our hall. One night it had started to get dark and I ended up shooting at our hall director. He then ran to the door of my room and heard me continuing to snipe at innocent passerbys (much to the amusement of the room full of people that had gathered). And when I denied any wrongdoing and explained that the shooting sounds he heard were just the sounds of me trying to install a hard drive on my computer he thought it was best to not allow me to come back to the scholarship halls the next year. And apparently this was mostly because I had decided to so blatantly lie to him (that or the 5 incident reports I had–you are supposed to be kicked out at 3). So I thought it best to write the following appeal to student housing:

I met with Jennifer Wamelink on April 10 about the BB gun incident at Stephenson Hall. Although I am not coming back to the scholarship halls next year (or indeed student housing), and perhaps not even the university, I would not be able to live with myself if I let this injustice go unchallenged.

As I informed you on the phone, I do not believe that there is a “preponderance of evidence” in this case. There are many inconsistencies in Matt’s observations and the supposed evidence. First, the stop sign could have been hit from anywhere in Stephenson except the back rooms or from anywhere in the surrounding 200 yards. Second, a BB gun makes a very non unique sound. I grew up on a farm and know the sound; it is after all just a metal spring being released. Metal striking metal is not always a gunshot by any means. Third, Matt states in his letter that does not even know for certain what room he heard this supposed sound issue from. And last, I have seven witnesses who can verify that there was no gun present–which seems to me a preponderance of evidence for the opposite case.

Due to these circumstance, I feel that student housing is treating me unfairly and in a discriminatory manner. As a national merit finalist, I am very upset that I am being treated in this manner. Thusly, I have taken the liberty of contacting a lawyer to ensure my rights are protected. I feel it is ridiculous that this has gone this far, but I am willing to take it much farther if justice is not served in a manner that is in accordance with the principles for which our founding fathers died.

Thursday or Friday this week, or most days next week will be fine for an appointment, let me know what is best for you.

You may call me if you have any questions, and to schedule an appointment at 312-1743.

There doesn’t appear to be a word of truth in the letter either. And I still got kicked out…which led to the photo of me giving the thumbs up in front of the three police cars. But that stimulating tale shall have to wait for another entry in ‘Rousing tales from Isley’s spirited past’!