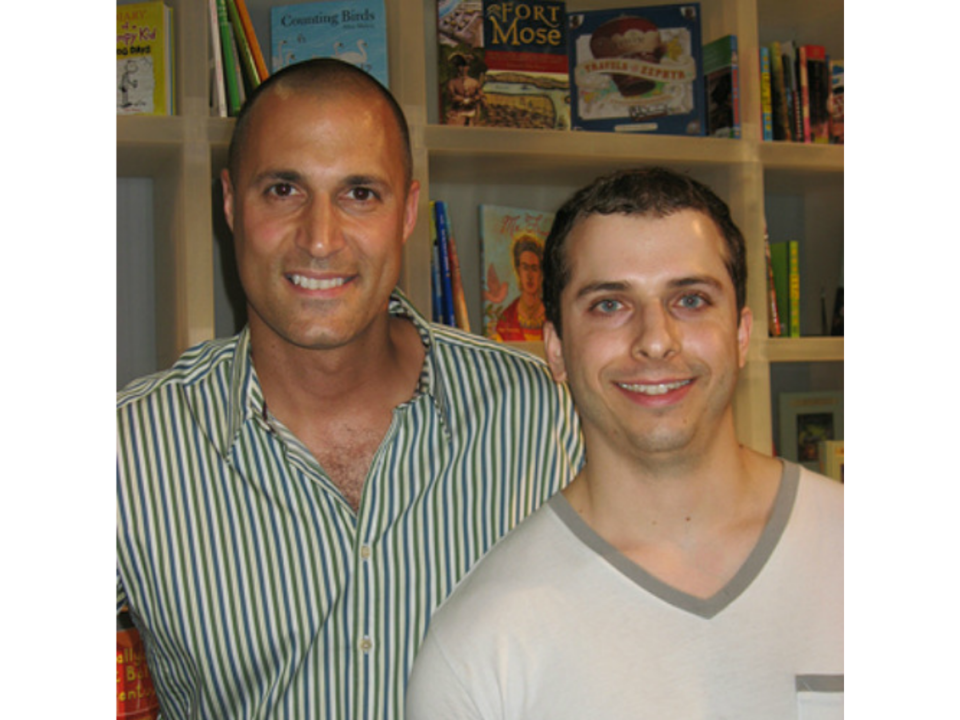 This is a week late, but I’ve finally collected the various pieces of internet evidence from my recent East coast trip into a blog post.  I generally try to stay away from posts about my weekends (I mean who wants to read that when they could read a post about fictional cartography instead!) but there were enough links to share from this trip that I figured a blog post was in order.  Oh fine, let’s be honest here.  I really just had the inexplicable desire to post that picture of me and America’s Next Top Model’s Nigel Barker on the internets.

So I started my trip by flying into Washington DC for the weekend.  Jen and David were great tour guides (David made up for not showing me where the Book of Secrets was in the Library of Congress by giving me the secret history of pretty much every building in the city) and we even had time to catch a showing of Kurosawa’s Drunken Angel at the AFI Silver theater in Silver Spring, Maryland.  It had been a while since I’d seen a Kurosawa film, and Drunken Angel was pretty fantastic, though, unfortunately it seems Kurosawa really can’t help but bludgeon the viewer with his moral and that took the film down a few pegs.  As I responded to Tweaks question of  “you don’t like morality?” the next day: “no, I only like my own morality”.  So yeah, keep it to yourself Kurosawa.

Anyway, since it was DC, I saw a lot of monuments, but one in particular really stood out: 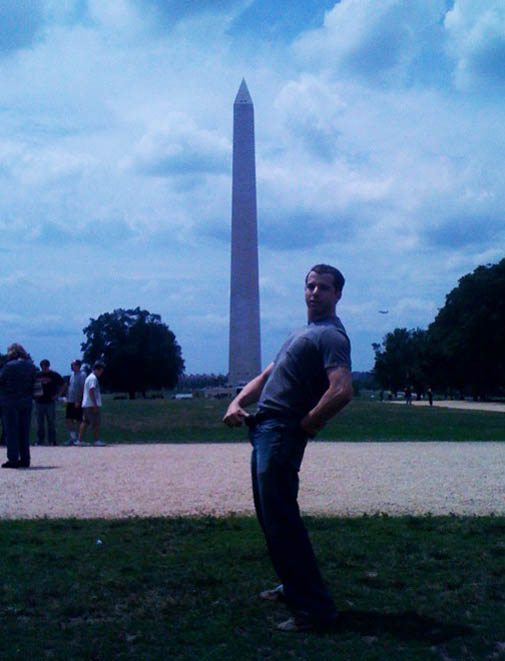 So, yeah, there is that.  Honestly, I’d never been so embarrassed getting my picture taken in my life.  Nothing like being surrounded by strangers witnessing you take the same picture that adorns every frat boy’s post-DC facebook page ever.  I should have mixed it up and gone for a sodomy angle or something.  Anyway, props to Jen for being such a trooper and taking the picture anyway.

The final night in DC was spent gaming with Jen, David, Willie, Jon and his room mates.  That’s right, I flew half way across the country to play games with Willie (who normally lives 30 minutes away).  Also, Republic of Rome turned out not to be as vicious of a game as I had always heard.  Only two punches were thrown in anger.

Monday I took the Chinatown bus from DC to NYC.  It was surprisingly pretty well run: left on time, no stops, even got in early…all for $20, I was impressed!  I got in late afternoon and was pretty footsore from walking around DC all weekend so after dinner Jon, Leah and I stayed in and watched about 9 hours of season 4 Buffy the Vampire Slayer.  Man, how awesome is Spike?

I got up early the next day and snuck into the Metropolitan Museum of Art (yes, I realize the “admission” is optional anyway…I just like sneaking in to places) and spent nearly 7 hours exploring the galleries.  I didn’t see everything, but I bet I got close.  It was even better than the National Gallery in DC, and that was pretty spectacular itself.  Also, I’ve realized that the medieval religious paintings (much to the horror of the friends who accompany me) at some point became my favorites.

Also, the Met had a sweet armor collection, including a MOTHERFUCKING GREAT SWORD:

That night Leah and I met up with Sami from www.nyccine.com to catch a film he recommended from the series the Film Society was doing on Muslims in Bombay cinema.  Here is his overview of the series:

And his review of the film we saw, Pakeezah:

I was pretty impressed with the movie.  It was somewhat low budget, and with more heavy handed melodrama than a Sirk film (as if that’s a bad thing), but when viewed as a whole I have to say it was a resounding success.  I’ve stayed away from Bollywood in the past just because I didn’t think I would enjoy seeing a bunch of stuff like the end of Slumdog Millionaire or that Benny Lava video but Pakeezah really had some bite to it.  I’ll have to check out some more of that 70’s Bollywood stuff (I also enjoyed seeing a musical set to traditional Indian music, the soundtrack was great!)

The next day I ate at like my 5th Thai restaurant of the trip, swam in the Atlantic at Coney Island (which turned out to be nowhere near as filthy as the last time I was at Coney Island–in November), talked about a bunch of comic books, had some drinks at Burp Castle, ate a Criff Dog and turned 30 (in no particular order).

Thursday I snuck in to the Book Expo with Chris (you know, because I like to sneak in to places).  You can imagine my surprise when I turned the corner to find myself nearly face to face with the noted fashion photographer Nigel Barker from America’s Next Top Model!  Sometimes a picture says it best, so this pretty much sums up my reaction: 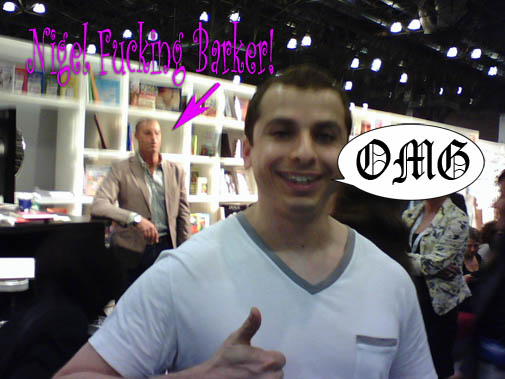 That’s not exactly my favorite picture of me ever, but what can I say, I guess Nigel just sucked all the pretty out of the room.  Chris didn’t seem as impressed as I was and took off to explore the convention while I waited in line to get the picture at the top of this post.

That night Chris and I did a VERY scientific taste test of a bunch of old beer he found in his dad’s refrigerator.  The beers went back to the mid 90’s; a lab coat, Kline bottle, slide rules and luchador mask were involved; and you can see all the gory pictures here:

Shena said I look drunk and sweaty in those pictures.  I explained to her that that pretty much summed up the state I was in when they were taken.

Saturday we rented a car and drove to Newport where we went on a really cool walk along the ocean cliffs.  Jessica insisted on touching a bunch of gross stuff we found along the trail, and it turned out the smelly beach was aptly named, but otherwise it was sweet.

Next we returned to Providence and taste tested a Century Egg:

And then, to finish a week where I had eaten almost nothing but Thai food, we did a quick Thai food food blog:

Anyway, that pretty much sums up my trip (aside from the thrilling tale of me waking up hungover at 3AM central time to catch the plane out of Providence…fun times!)  All I have to show for it are two pictures of me and Nigel, an embarrassing Washington Monument dong picture and a couple videos of me drunkenly taste testing things.  Still, I’m going to go ahead and call the whole trip a resounding success on the basis of the Nigel pictures alone!

That Nigel is good, but this Nigel is better:
http://4.bp.blogspot.com/_KwLiUiiB8aA/SeHSuwxRh_I/AAAAAAAABc0/t8isOib-K8w/s400/nigel-barker-hair.jpg
I would be more jealous if you met Young Model Nigel. Or Taylor Lautner’s chest (surely it’s written a book by now?).
Also, good job defiling our nation’s monuments.

Look, make a monument that looks like a big dong, expect immature douches to take pictures of it as their dong and post them on the internet. I’m sure they knew what they were getting into when they built that thing.

Okay, I haven’t read any of this, only seen that first photo. But I think I can safely already post my comment:

Heh, it’s good to see someone knows the appropriate reaction!

Also, yes, I have to agree with Nadine: her Nigel is better.

That stodgy ol’ Met exhibit would have been a sight more epic had they the sense to hire that fat man to flail their great sword about on pigs’ heads like he was at a fucking Mayhem show.

You know what? This doesn’t have anything to do with anything, I just wanted to say that tonight I re-read this:

and I just wanted to re-share them with anyone reading your comments who hasn’t read them yet. Also, moar rousing tales pls!!!