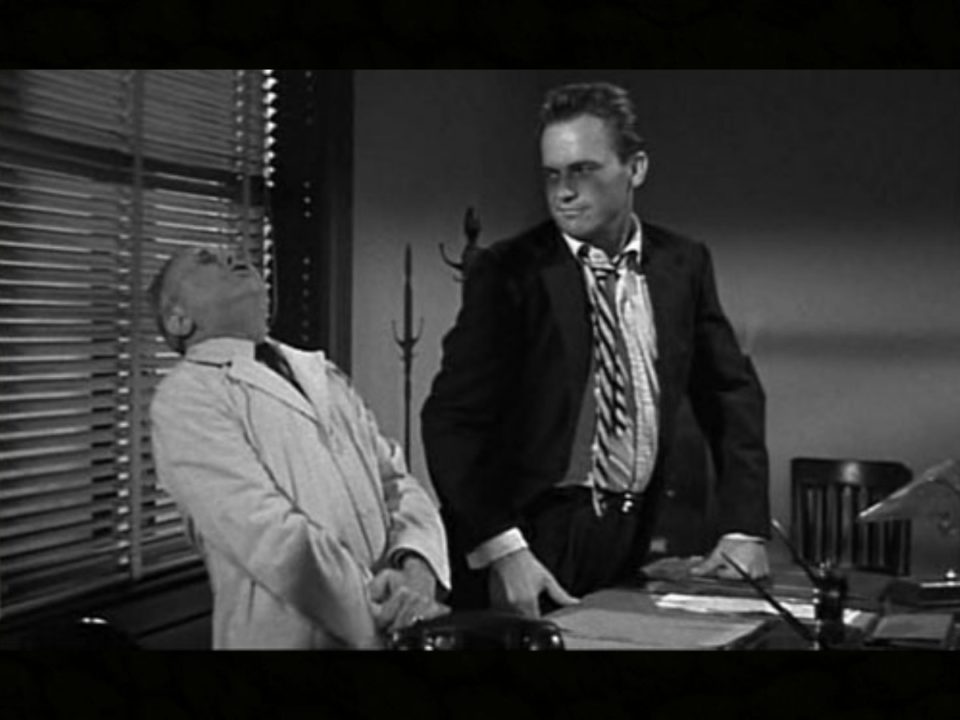 Far be it from me, a guy who has an unnatural love of romantic comedies, to try to tell you what MEN like in their movies, but that’s just what I’m going to do today.  After all, I don’t just go from six to midnight for films involving last minute races to the airport to declare one’s love; my passions are also inflamed by films about men acting like uninhibited cavemen.  I don’t care who you are, I’m sure even Gandhi had days where he just kind of wanted to put fist to face in a gloriously vulgar display of pure physical power.  This desire for face punching mayhem is exactly the instinct that today’s movie, 1955’s Kiss Me Deadly, caters to.  And in case all this talk of men getting up close and personal with each other sounds a little gay, not to worry, every woman in today’s film tries to do the main character in an attempt to thwart the ever present specter of jockish homo-eroticism.

To start, let’s accept the fact that Kiss Me Deadly is a fantastic movie before we move on to its more badass elements.  Expertly structured, this is private eye cinema at its finest.  The inclusion of the apocalyptic elements and striking stylistic choices elevate it even further into the ranks of the all time great films.  But, as I always say: “There are tons of great films out there, but why am I writing about this one specifically?”

I am writing about this one specifically because Mike Hammer is such a badass.  The character was created by pulp novelist Mickey Spillane in 1947, and from the that very first book he was quite different from other private eyes.  Specifically, Mike Hammer was a brutally violent misanthrope who was only one step removed from the Punisher as far as psychotic vigilantes go.  Just check out this scene from the book today’s movie was based on:

Billy Mist was expecting somebody, all right, but it wasn’t me. He was all dressed except for his jacket and he had a gun slung in a harness under his shoulder. I rammed the door so hard it kicked him back in the room and while he was reaching for his rod I smashed his nose into a mess of bloody tissue. He made a second try while he was on the floor and this time I kicked the gun out of his hand under the table and picked him up to go over good. I held him out where I wanted him and put one into his ribs that brought a scream choking up his throat and had the next one ready when Billy Mist died.

I didn’t want to believe it. I wanted him alive so bad I shook him like a rag doll and when the mouth lolled open under those blank eyes I threw him away from me into the door and his head and shoulders slammed it shut. His broken face leered at me from the carpet, the eyes seeing nothing. They were filmy already. I let it go then. I let that raspy yell out of me and began to break things until I was out of breath.

See what I’m saying?  Not exactly the kind of guy you’d like to sit down to lunch with.  Many claim that the film version of Kiss Me Deadly made Mike Hammer too unlikeable when compared to the book version.  However, while I’m not the biggest Mike Hammer expert, I have to wonder if we are reading the same books.  Sure, the film version might be a little greedier and more willing to pimp out his secretary/lover Velda, but he’s actually a bit less psychopathic than the Mike Hammer of the novels.  Of course, we are talking about 1955; we can’t exactly have Mike Hammer exploding peoples’ faces in geysers of blood and teeth for looking at him the wrong way like he does in the books.

That said, Ralph Meeker does a fantastic job of bringing a pretty brutal Mike Hammer to the big screen anyway.  He’s just the right combination of simple mindedness, macho cruelty and unwavering cocky narcissism.  He’s not quite as vicious as the Mike Hammer of the novels, but he still does an admirable job of slapping, punching and kicking his way through every male character in the movie.

I will admit that the film is probably making a sly commentary on the ridiculousness of such a violent protagonist.  For instance, the scene where he slams the coroner’s fingers in the drawer and then smiles to the extended bout of screaming that follows (pictured above), obviously delights in showing how much of a sadist the supposed “hero” of this film is.  But, whether Aldrich knew it or not, this misanthropy of the hero is precisely the draw of Kiss Me Deadly (on a visceral gut level, not an intellectual one).  Yes, this man is an animal.  But, from our safe vantage point on the opposite side of the movie screen, here is a hero who says, does and punches exactly what he wants.  If he smiles as he crushes an old man’s fingers, it is only the smile of someone basking in the glory of their physical power over lesser men.  Also, that old man was being a dick and totally asking for it.

If all this worrisomely fascist “might makes right” stuff sounds a little problematic, well, of course it is.  But, if we are really being honest, the reason we watch action movies and read action books is, deep down, to experience the vicarious thrill of kicking someone’s ass without consequences.  No one would read a Mike Hammer novel for the writing alone, Mickey Spillane couldn’t write his way out of a paper bag.  The reason we read Mike Hammer (or Jack Reacher) books and watch old Schwarzenegger movies is to cheer the hero on for being a ridiculous badass.  Ralph Meeker’s Mike Hammer is just that kind of baddass, so just remember that consciences are for pussies without the conviction to stand by their actions and enjoy the ass kicking carnage of Kiss Me Deadly.  Of course, I’d never want to go get a beer with Mike Hammer, I mean, let’s be serious, he is kind of a fucking awful person after all.