The Lord of the Rings, the lost chapters II: Grief Counseling 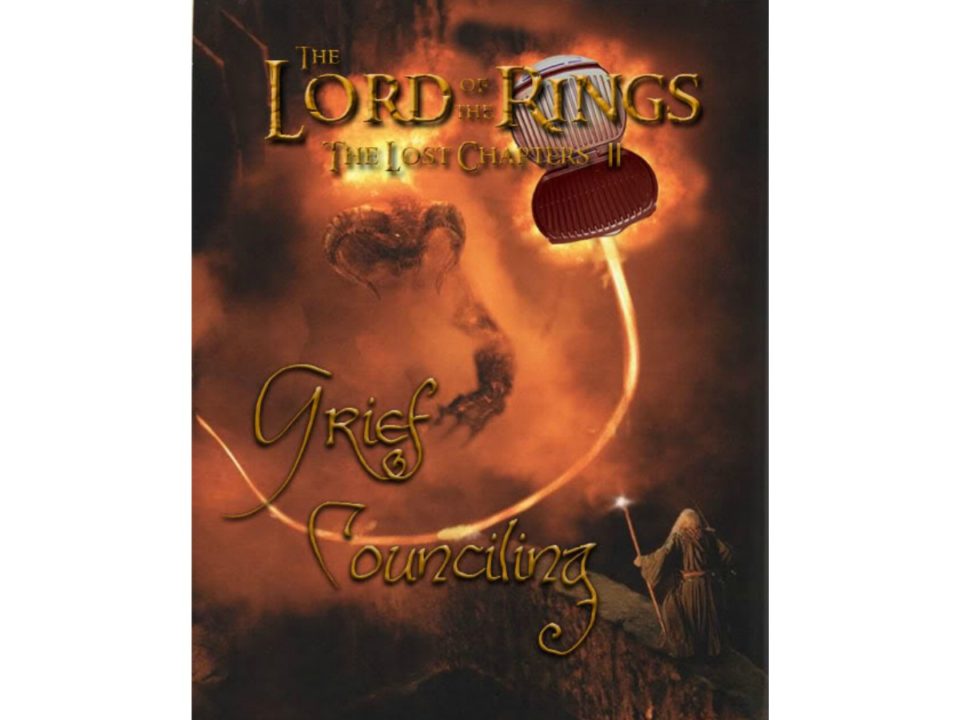 The fantasy fiction community was once again rocked when more previously unreleased sections of The Lord of the Rings were discovered. This “grail” of a literary find amounted to a new lost segment cut out of the original manuscript by censors. Years of suppression by the Tolkien estate followed, but the wait for this new lost section is finally over! This new section takes place during the funeral of king Théoden on the fourth page of the chapter titled “Many Partings” in Return of the King for those of you that want to print this out and staple it into your copies of the book. I have started this monumental find with a section from the book as published in bold for context. Enjoy!

At last when the feast drew to an end Éomer arose and said: ‘Now this is the funeral feast of Théoden the King; but I will speak ere we go of tidings of joy, for he would not grudge that I should do so, since he was ever a father to Éowyn my sister. Hear then all my guests, fair folk of many realms, such as have never been gathered in this hall! Faramir, Steward of Gondor, and Prince of Ithilien, asks that Éowyn Lady of Rohan should be his wife, and she grants it full willing. Therefore they shall be throthplighted before you all.’

And Faramir and Éowyn stood forth and set hand in hand; and all there drank to them and were glad. ‘Thus,’ said Éomer, ‘is the friendship of the Mark and of Gondor bound with a new bond, and the more do I rejoice.’

‘No niggard are you, Éomer,’ said Aragorn, ‘to give thus to Gondor the fairest thing in your realm!’

Then Éowyn looked in the eyes of Aragorn, and she said: ‘Wish me joy, my liege-lord and healer!’

And he answered: ‘I have wished thee joy ever since first I saw thee. It heals my heart to see thee now in bliss.’ Aragorn’s words were true, but his heart faltered at the thought of Éowyn’s throthplighting to another man. Long had he told himself Arwen was his true love, but he could not help thinking he may have made the wrong choice. In a voice tinged with a distant pain he continued, ‘the bond between thyself and Faramir is most surely a strong one, would that your happiness be eternal.’

Unable to meet the eyes of her true love, Éowyn searched for the words that would not come.

The silence was punctuated only by the piercing stare of Arwen until Gandalf strode forward and planted his staff firmly on the oaken floor in front of him. In a mighty voice he said, ‘to all who have gathered here today, there is much I would say.’

‘By Mazarbul’s beard,’ muttered Gimli, ‘where his staff goes an open mouth is sure to follow.’

‘Thus spoke the maiden! And though I sense your true meaning, I shall I take no umbrage at that either; for your people, though small in stature, are naturally great in unthinking words,’ replied Gandalf.

‘My people?’ said Gimli, but his wrath was overlooked by the white wizard who judged his own words to be of greater import.

‘Each of you in this room has struggled mightily for the fate of middle earth. It seems only fitting to pay honor to those who have helped to save everything that we hold dear; through my close guidance and inspiration. First among all here I must give praise to dear sweet Frodo, who bore the greatest burden among us. Little Frodo is also unquestionably the fairest in this small gathering, a hobbit whose beauty shines like the midday sun.’

Glances were exchanged around the room while Sam suppressed a snigger. Gandalf paid no heed and went on.

‘Frodo’s faithful companions also deserve mention. Sam, whose heart is only exceeded by his stomach; Meriadoc, whose fondness for the weed has often led to blunder; and Pippin, the exotic Took who speaks more than all the rest of us combined. Let no one say that you three are not courageous souls as well.’

‘Praise to the hobbits,’ murmured Glorfindel, ‘their bravery has saved us all.’

‘Glorfindel,’ interrupted Gandalf, ‘would that you keep such thoughts to yourself. I can say nothing good about who you choose to be. I recommended against you entering the Fellowship so many days ago in Rivendell, and I maintain the decision was wise.’

‘I meant no ill…’ Glorfindel’s soft voice was again interrupted as Gandalf continued.

‘Stout Gimli and Legolas Greenleaf, long shall the songs of middle earth sing your names though Gimli’s mood be more oft dark than not.’

‘Might I just say that long shall the songs of middle earth sing your name as well dear Gandalf!’ replied Legolas as Gimli returned to his whittling with a frown.

‘And might I also say that the songs will find no words to sing your name so great were your deeds and thus they will not even be sung at all!’ shouted Éomer in a voice even greater than Legolas had mustered.

Nodding his head Gandalf said, ‘True, though I have suffered, and been burnt mightily by the Balrog’s whip, we can not forget those who have never been exposed to such perils either. Celeborn and Galadriel, you have helped the fellowship when my leadership was absent and for this I thank you. Though it is a thing widely known that the length of Celeborn’s tunic be longer than that of his lady, I think…’

Speaking before Gandalf could finish, Galadriel admonished, ‘such talk is not appropriate!’

The room fell silent except for the gentle sounds of Sam’s muffled laughter.

Elrond leaned close to his daughter Arwen and whispered, ‘there is much that was different long ago in the first age and such memories are not unclouded, so I would not be surprised if one of Celeborn’s ilk had even crept unnoticed into my bedchamber.’

Not to be swayed from his task, Gandalf continued his speech when such murmurings had died down. ‘We must also not forget the contributions of the hard working peasantfolk in the fiefdoms about Dol Armoth. To you and your people Prince Imrahil, I thank you in the secret language of your land that you have taught me today; dinkünd flikæ my friend, dinkünd flikæ.’

Though his face remained unchanged, it seemed to all in the hall as though Prince Imrahil’s countenance took upon itself a more mirthful tone.

Suddenly a commotion was heard in the back as a stooped figure dressed in shades of brown accompanied by a great bear of a man entered the hall.

‘Radagast, bird-tamer, though late to this feast your presence is nonetheless welcome,’ shouted Gandalf. ‘Who has accompanied you on your journey from Rhosgobel?’

‘Well, welcome to you as well Grimbeorn, son of Beorn, perhaps Radagast’s great age has delayed you in your journey.’

‘Gandalf, though it is often I must remind you, we are of the same age,’ replied Radagast.

‘I have many doubts as to the truth of that, but this is not the place for such musings. For we have gathered here today not only to do honor to a fallen hero, but to honor also those who live still. Thus this upcoming wedding bodes well for our future. Éowyn, Aragorn has told me of his tryst with you upon the steps of Dunharrow, but I hope that you might look past that as you settle with a man…’

At this proclamation, Grimbeorn, though late to arrive, perceived the folly of Gandalf’s words and quickly leapt to stop the white wizard from further error. But Faramir’s fury had been kindled and would not be abated. With a cry of ‘Aragorn, you have soiled my throthplighted with your dalliances!’ he leapt toward his king with a terrible wrath wrought upon his bearded face.

But Faramir was not to have his vengeance, for Éomer, always at the ready, stood and caused a great bowl of strong Rohirrim horse wine to be upended upon the unsuspecting Faramir before his rage could come to fruition. Standing over the choking Faramir, Éomer shouted, ‘Thus shall all who violate the sanctity of this great hall fall. For I am assistant king no longer and I will brook no such disrespect in my realm.’

‘Though I believe Éomer meant he is no longer assistant to the king, he speaks the truth,’ said Aragorn. ‘Faramir, do not harbor false apprehensions, it was but a small thing and of little import.’

‘Again, thus spoke the maiden!’ interrupted Gandalf though he was quickly quieted by the massive Grimbeorn.

But Aragorn’s words flew true and found their way to the heart of Faramir. King and steward then embraced, and all involved were able to forget what had been spoken that sorrowful day. Though, as the sun sank low and many had left the feast for their quarters, a dim light could be spied from the room of Aragorn and Arwen and the low murmur of voices talking long and with great import drifted through the night air of Edoras.

If you aren’t quite as up on the Office as I am, here is a handy little key as to who was who in this story (in order of appearance):

Dwight – Éomer: Son of the king of Rohan, Éomer wishes only to be in charge of things himself one day. He also thinks Gandalf is pretty awesome.

Jim – Aragorn: King of Gondor, and favorite of the ladies. He rarely combs his hair due to his long travels around middle earth.

Karen – Arwen: Aragorn’s wife who he met while spending time up north in Rivendell.

Michael – Gandalf: Driving force behind the fellowship, he is known for sticking his nose in where others may not want it.

Stanley – Gimli: Dwarf who just wants to be left alone to his whittling. He is often cranky.

Ryan – Frodo: Hobbit who is new to the hero business, but yearns to prove himself worthy.

Kelly – Pippin: Hobbit with exotic Took blood, whose natural exuberance can be grating to those around him at times.

Toby – Glorfindel: Competent but mild mannered elf who has inexplicably aroused the wrath of Gandalf who advised against his joining the fellowship.

Andy – Legolas: Elf who has joined the fellowship through three simple tactics—personality mirroring, name repetition, and never breaking off an arm clasping.

Oscar – Celeborn: Husband of Galadriel, though the nature of their relationship is the cause of some question.

Creed – Elrond: A half elf of great age, whose long life has been full of many adventures and has led to an interesting outlook in present days. He is also a little creepy.

Darryl – Prince Imrahil: Lord of the lands to the South West of Minas Tirith, his fiefdoms are full of hardworking peasantfolk.

Phyllis – Radagast: Wizard who lives in the shadow of Gandalf though they are the same age.

Bob Vance, Vance Refrigeration – Grimbeorn, Son of Beorn: A hairy beast of a man whose friendship with Radagast is matched only by the length of his title.

Roy – Faramir: The man who is to be wed to Éowyn, he harbors a secret resentment towards her love for Aragorn.