The Lord of the Rings, the lost chapters III: A Well Connected Party. 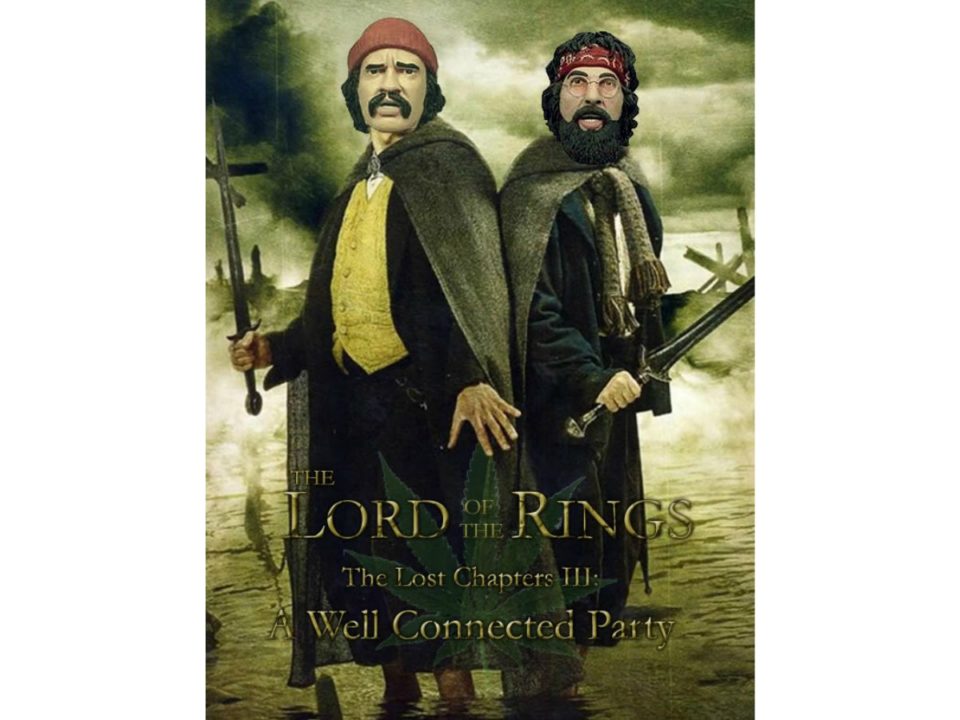 The fantasy fiction community was once again rocked when more previously unreleased sections of The Lord of the Rings were discovered. This “grail” of a literary find amounted to a new lost segment cut out of the original manuscript by censors. Years of suppression by the Tolkien estate followed, but the wait for this new lost section is finally over! This new section takes place immediately after the Ent-led sacking of Isengard in the third to last page of the chapter “The Road to Isengard” for those of you that want to print this out and staple it into your copies of the book. I have started this monumental find with a section from the book as published in bold for context. Enjoy!

The king and all his company sat silent on their horses, marveling, perceiving that the power of Saruman was overthrown; but how they could not guess. And now they turned their eyes towards the archway and the ruined gates. There they saw close beside them a great rubble-heap; and suddenly they were aware of two small figures lying on it at their ease, grey-clad, hardly to be seen among the stones. There were bottles and bowls and platters laid beside them, as if they had just eaten well, and now rested from their labour. One seemed asleep; the other, with crossed legs and arms behind his head, leaned back against a broken rock and sent from his mouth long wisps and little rings of thin blue smoke.

Perigrin Took and Merriadoc Brandybuck were too blissfully ensconced in their fine Shire weed to be aware of the approaching company. Merry watched the last rings of smoke drift from his mouth and float past his ruddy Easterling seeming eyes. Looking at his spent pipe Merry tried to clear his senses. “What manner of leaf did we smoke dear Pippin?” he said.

Stirring from his prone position, Pippin spoke in a slow voice. ‘Mostly it was fine Hornblower brand Longbottom leaf from the Southfarthing’s 1417 crop. But there is some orc in it too,’ he said.

‘Orc? What do you mean my friend?’ asked Merry.

‘Well the dung about the storeroom had a queer smell and it soon became clear to me that the lesser orcs whose duty it was to guard these storerooms knew nothing of pipe smoke and fine weed. They had instead been eating it straight! I’m sure putting such as this into one’s belly would have caused even a mountain troll to take leave of his senses! Still, it seemed wasteful to not use the byproduct of their ill advised repast’ replied Pippin.

A look of consternation formed upon Merry’s brow. ‘Do you mean that we smoke the offal of orcs?’ he asked.

‘Your weariness is gone and your troubles put to rest are they not? And to my mind the quality seems to be even better than before,’ replied Pippin.

‘I wonder what Uruk-hai tastes like,’ murmured Merry thoughtfully.

Pippin merely nodded and took another long draw upon his pipe. Glancing at his companion he noticed a certain queerness begin to take a hold of Merry.

‘Am I walking well?’ asked Merry.

‘I believe you lie upon the ground as do I,’ responded Pippin with a certain degree of uncertainty upon his part.

‘Great Took, what was in that weed?’ asked Merry in an alarmed tone. ‘Never in my time have I smoked pipe weed such as that. I’ve smoke all manner of leaf in my years, but that seemed to have the strength of ten hobbits pounding upon my head!’

‘My breath, it does not come!’ cried Merry.

Fumbling in his pockets for a handful of Lembas Pippin said, ‘You panic without thinking dear Merry, I have what you need to regain your peace.’

‘Never have I had weed such as that before,’ said Merry, while the note of panic in his voice seemed far from lessoning.

Proffering a handful of crumbled rations to his companion, Pippin said, ‘just take these and all will be right in your head again.’

‘Just take them,’ replied Pippin as he fumbled in his pockets for more Lembas.

Merry, wanting his peace to return, filled his mouth with Pippin’s offering and swallowed. Suddenly Pippin looked up. ‘Whoa, don’t swallow those my friend! I almost gave you the wrong viands!’ he said.

Merry’s panicked countenance grew even more troubled. ‘But I did just swallow them my friend!’ he said.

‘Ho ho ho but that does fill me with mirth!’ laughed Pippin

‘Never have I seen a hobbit eat more mushrooms than you have swallowed just now!” exclaimed Pippin in excitement.

‘And never have I eaten that many mushrooms in my life either, what queerness will this repast inflict upon me?’ said Merry, his tone more worried than ever.

‘I just hope you have no pressing engagements for the space of two fortnights my friend!’ replied Pippin merrily.

‘Alas, but I am done for, these ruins shall be my deathbed!’ wailed Merry.

‘No, no, those were farmer Maggot mushrooms of the highest quality,’ said Pippin.

Merry however was not assured. He quickly began to blubber and wail about his head growing to the size of a cantaloupe and all manner of queer afflictions that would overtake him upon the consumption of such a large quantity of mushrooms. It was then that Pippin remembered the words of Galadriel after he himself had lost his composure before her charmed mirror.

Grabbing Merry by the shoulders Pippin shouted, ‘Esteë Erulissë my friend! Repeat these words my friend!’

Frantically Merry repeated the elvish words. ‘Esteë Erulissë,’ he said over and over with Pippin until he felt his queerness abate.

Unfortunately it was at this point that Pippin, ever the rambunctious sort, decided to let out a great yowling roar that would have given pause to even a charging Warg with its fierceness.

‘You have given me the shelled dragon’s head my friend!” shrieked Merry in fright.

Pippin’s wild guffaws were cut short as he noticed the approaching company of travelers. ‘Quiet yourself Merry my friend, Gandalf approaches and with him comes the Lord of Rohan!’ he said.

But now it was Merry’s turn for mirth. ‘Twas a fine trick my friend, RAWR indeed!’ he said.

Pippin, knowing the wrath of kings to only be equaled by that of an incensed wizard, quickly shut his eyes and feigned sleep. Merry, his panic passed, chattered merrily to himself as the perplexed travelers approached.

For a moment Thèoden and Èomer stared at them in wonder. Amid all the wreck of Isengard this seemed to them the strangest sight…

Haha, that was pretty funny. I’ve only skimmed through those books but that movie is hilarious.