First I just want to say how honored I am that my site actually comes up when you enter this google search.  That said, I don’t really have the time (or poor decision making skills) anymore to video myself “blowing some shit up”, so I guess I’ll just leave you with this picture: 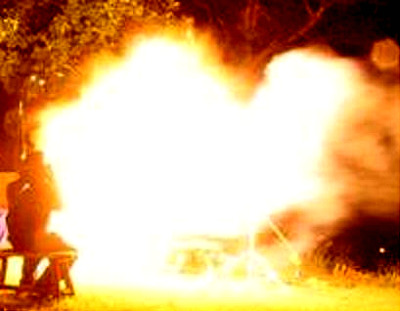 That’s me (trying out a flame retardant jumpsuit) with my Pinata of Doom from a lake trip a while back.  It is also one of a couple reasons I shouldn’t be allowed near fireworks.

There are times I feel like I should reevaluate some of my life decisions based on the search terms that Jock Blog seems to consistently turn up.  Also, Chelsea, sorry to include you and your armpit in that mess.

You are either asking about the neutral/lawful-evil Dungeons & Dragons outer plane named for the prototypical Jewish Hell, or you are asking what a D&D game would be like if you played as the members of the somewhat obscure Goth influenced black metal band Gehenna.  I went ahead and assumed the latter and took the liberty of transcribing an exchange that took place during a “Gehenna” campaign that I DMed last summer…enjoy:

DM – You enter the Helvette record store’s door to the North.  The cold stench of mildew emanates from the wet concrete walls.

Dolgar – I can’t understand him, what did he say?

Dolgar – He says he wants to cast a spell.

DM – What spell?  All he has is a light spell and everyone knows the Helvette record shop is already lit by torchlight.

Dolgar – He still wants to cast his spell.  He’s afraid someone else will cast a spell before him and he wants to cast the First Spell™

DM – Fine, Sanrabb, you light the semi-darkness.  There is a Black Metal Bass Player in front of you.  Svartalv, that’s you.  You guys can talk now.

[Svartalv appears to be shouting a return greeting at the top of his lungs, but no sound comes out]

Dolgar – Why can’t we hear him?

DM – Sarcana, everyone already has “Language – Black Metal Keyboards”, you don’t have to shout.

Sarcana – OH QUIT WHINING, I ALWAYS SAID WE’D BE BETTER OFF REPLACING YOU WITH A DRUM GOLEM LIKE MYSTICUM HAS ANYWAY…I’D LIKE TO SEE YOU PLAY A HIGH HAT THAT FAST…

[At this point the session quickly degenerated into a “who is more evil” argument until I managed to distract the PCs with Monty Python quotes.]

I tried to come up with something awesome here, but unfortunately all my attempts with variations of “is that rapid rise yeast in your “pancake mix” or are you just happy to see me?” seemed to fall as flat as yeast in cold water.  So I guess I’ll just go with my old standby:

I think I covered most of the basics with the ten tips in my Nerd Dating post a while back, but I have managed to come up with five more “first date” tips for nerds right here:

How embarrassing. Now everyone will know i google my own armpits.

There’s no shame in that. It’s good to know what future employers, etc will be able to find out about your armpits.

That little Black Metal RPG selection is probably the bit of writing I am most ashamed of on this site. And that is saying something…

Don’t be so hard on yourself. You’ve got to realize that not everything can carry same cachet as “My top five farts of all time.”

Because the internet is a scary place.

I think that the pinnacle of writing on this site would have to be the novelization of Bad Boys 3. Sheer poetry.

How would you know anything about the pinnacle of writing on this site if you refuse to read Jock Blog?

Okay, just catching up on my Isley blogs tonight . . . the Thai hot section is hilarious. 🙂

That Thai hot section is no laughing matter.