My first instinct was to say “no, sad Keanu is eating, not folding paper”.  But then I took a closer look at the picture.  Something didn’t seem quite right about his hand: 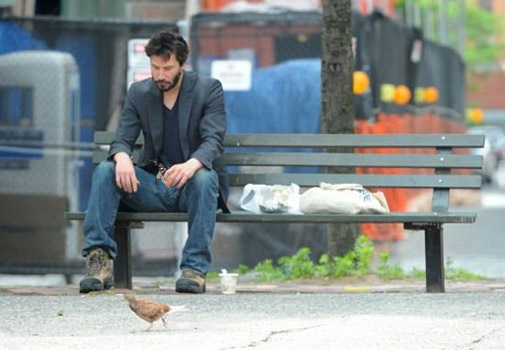 So I decided to fire up my old Esper Photo Analysis plugin in photoshop and see if I could find out a bit more: 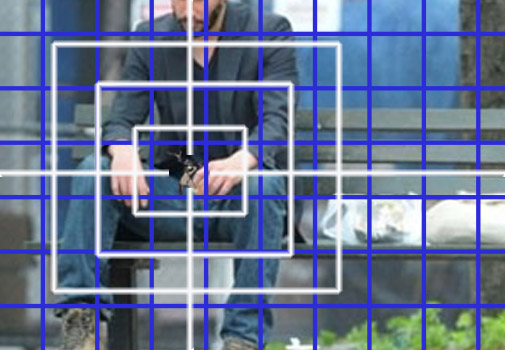 After tweaking with the settings and enhancing quadrant 224176 and then rotating the perspective and tracking 45 left I found something very disturbing: 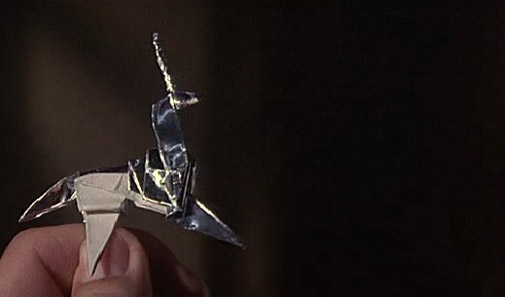 It really puts a whole new spin on the sad Keanu situation (especially in light of the recent ultimate special edition final cut of the original sad Keanu photo with the 2 extra never before seen pixels).  Thus, I think the following caption is fitting: 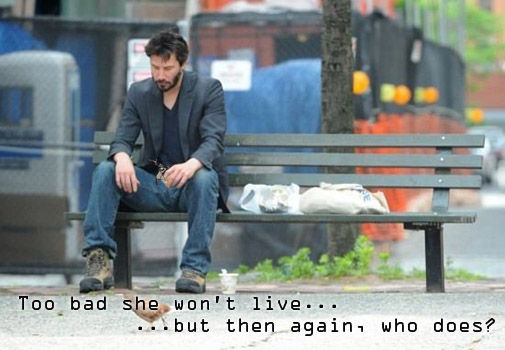 If you’ve never seen Blade Runner, trust me, all that was totally hilarious and worth it.  And go watch Blade Runner already will you?!

This one is easy.  I mean, there are countless 5 digit codes in cryptography, but my all time favorite is the following:  get a calculator, type in 58008 and then turn it upside down.  Is that not brilliant!!??  I mean, you could do it with 80085, but then you don’t have to turn it upside down and thus it isn’t as secure of a code.  And by turning it upside down you also open yourself up to a hilarious 8 digit variation on my favorite 5 digit code: 55378008.

Speaking of boobs…it looks like my Renaissance Magazine post continues to bring in the letters.  I was all set to just do another set of pictures of ridiculous cleavage when my friend Rebecca questioned the etymology of the word “boob” and wondered if people even used that word in ye olde tymes.

So I did a little research.  The first potential usage of the word “boob” dates all the way back to the end of the 14th century where the word “bubo” was used to describe the swollen glands of plague sores.  While it is possible that it could have then evolved to describe a swollen pair of breasts, I doubt that was the true origin of the word “boobs”.  However, in 1655 the word “bubbies” (possibly from the Germanic “bubbi”) was definitely used in text to describe “breasts”, thus, I think it’s fair to talk about boobs, even when discussing ren fest times.

Anyway, I figured I’d switch things up and put some pics of shirtless fat dudes in ren fest gear instead of actual “wench boobs”.  But, I was unprepared for the horrors of an unfiltered google image search for “ren fest man boobs” (also, I’d advise against a google image search for priapism.  …don’t ask).  Thus, while I was staring in amazement at the following centaur picture, Rebecca again saved the day and said “why don’t you just put an udder on him?”  So, there you have it, you can blame her for the following: 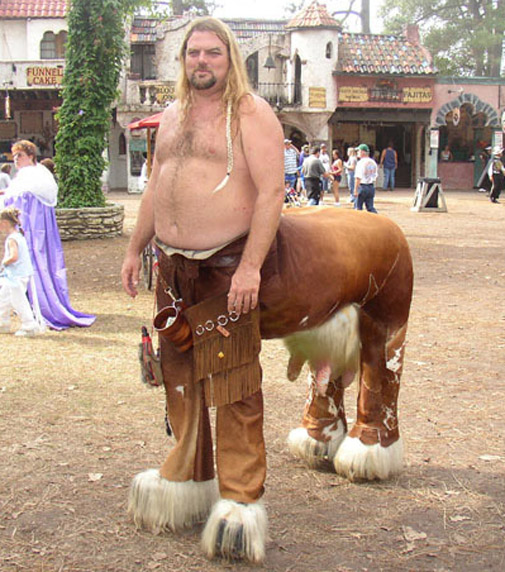 *that last joke was all me…in case there was any confusion about who is writing the jokes here.

Things I learned from watching roadhouse?

I don’t know what you learned from watching Road House, but I know I always leave every viewing of that classic a wiser human being.  Still, it had been awhile since I’d seen Road House, so I got a couple dudes (shout out to C-Wolfe and The Hitman!) together with some forties and we Swayze-ed it up.  In addition to learning that Colt 45 only tastes “not that bad” for the first quarter of the 40, we also learned quite a few things about life in general.  And here are the top five:

5. If you played a Road House drinking game where you had to take a drink every time Swayze spin kicked someone…you’d get really drunk.

4. Sam Elliot automatically makes any movie he is in about twice as awesome.  Even without his mustache.

3. There are some situations that can only be solved with an eagle claw strike to the throat.  However, apparently most women seem to view ripping someone’s throat out (also drunks asking them if they want to get “nipple to nipple”) as a “turn-off”.

2. Before kicking someone’s ass for calling your mama a ho, ask yourself a simple question first:  “Is she?”

I’ve discussed this one before, but I think it bears repeating.  See, 99% of black metal bands use some form of Old English Text MT for the font on their albums.  And Veles really picked a good one for their classic Night on Bare Mountain release…except for the unfortunate fact that all the k’s look like f’s.  To this day I still can’t hear this song without giggling at the title “A Darf Dream”.  I wanted to post more examples of Veles’ “darfness” but unfortunately this tiny clip of the album notes was all that I could post without Veles reminding you of the Polish black metal scene’s inexplicable (considering the history) love of national socialism. 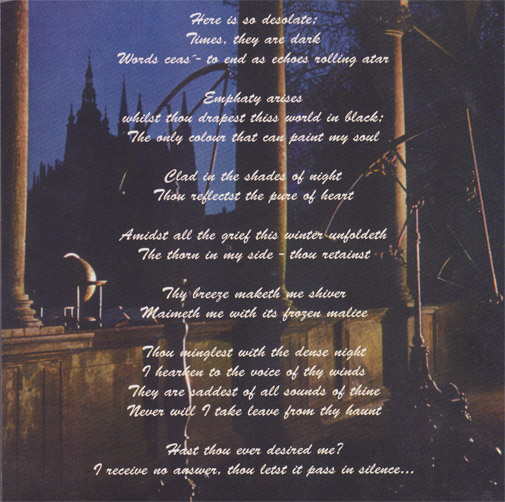 So, it’s bad enough Arcturus chose a font that looked like it was copied from the back of a religious Hallmark card, but unfortunately it was also legible enough to make the ridiculous high school poetry (that is about as overwrought as their music) completely readable.  Honestly, I thought the dragon poem from Renfest Magazine was better. 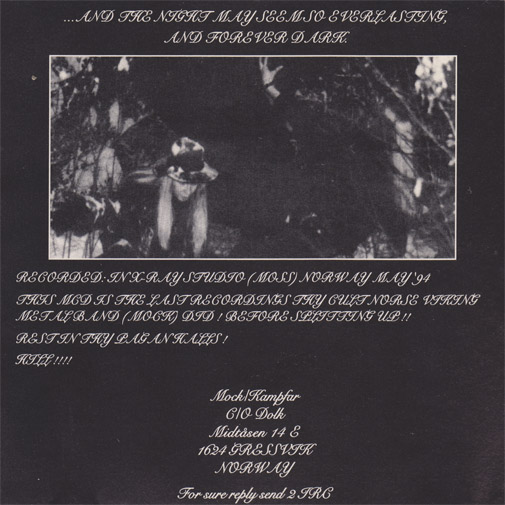 Little known black metal band Mock made the same mistake Arcturus did by not realizing that the whole curly handwritten font thing doesn’t look all that evil.  Though maybe they just assumed that their choice of font would be offset by typing it out in the insanely brutal ALL CAPS!  Unfortunately, all it did was make the whole thing a ridiculous unreadable mess.   I’ve spent quite a bit of time poring over the words in the above picture, and near as I can make out, it is translated as follows:

RECORDED: IN X-RAY STUDIO (MOSS) NORWAY MAY’94
THIS MCD IS THE LAST RECORDINGS THY CULT NORSE VIKING METALBAND (MOCK) DID! BEFORE SPLITTING UP!!
REST IN THY PAGAN HALLS!
HILL!!!!

Love all the exclamation marks.  As for the final shout of “HILL!!!!” your guess is as good as mine.

The thing I love about Arckanum (in addition to their heavy use of owl samples in their music) is that not only did they write pages of lyrics in the most unreadable handwritten epic font ever, they also chose to print half of it in silver ink.  On a grey background.  I hear there are some private contests offering a reward for anyone who can transcribe an entire Arckanum album.  Sadly, no one has even figured out the language yet.

1. Darkthrone – A Blaze in the Northern Sky

Ok, fine, maybe I made this one up.  Still, I really hope there is a black metal band out there somewhere that has made the unforgivable gaffe of using Comic Sans Serif.

Then you can express my apologies for giving him an udder if he ever stumbles across this picture 🙂 Also, we were wondering, are his back legs on wheels? Or do they just drag on the ground?

Well, anything with Road House and black metal guys being ridiculous kind of just writes itself.

Larry has a variety of accouterments which he can attach “under there”, including a girthy member. He wouldn’t mind the udders, I suspect.

I initially thought the udder was added to cover up something less respectable (are udders respectable?)