I’m a little pressed for time this week what with final papers and all that, so I thought I’d ask for some help on this first one from my friend Chris, who you might know from such blogs as Items of Potential Interest (and its recurring “Mustachioed Pitchers of the 1980s” and “Truckin’ Music Tuesdays” features) and Funnybook Babylon; the tumbler I Hope You’re Happy Internet; the twitters BIG DAWGS and Kenny Bloggins; and, of course, member of the elite Cola City Cobras.

Besides, rap isn’t my strong point, and aside from trolling some horror core kids that one time over at A Blog is a Treat, I have not had much exposure to the unholy underbelly of the rap world.  So, much as I love unholy things, I’ll let Chris take this first question from here:

Good question, Internet User! There are many metrics by which to judge the unholiness of rappers. Plenty of rappers have boasted of unholy acts: theft, murder, rape, torture, cuckolding, sewing one’s asshole shut.

There are also numerous rappers who have been jailed for unholy crimes, up to but not yet including orifice sewing. But do deeds or actions make one unholy? It seems like most unholy black metal artists (aside from a few obvious exceptions) do not actually spew sorrow and putrid blood across the poisoned land, they only talk about it.

While there are plenty of options lyrically — honorable mention goes to Gravediggaz, progenitors of horrorcore, who cut a video endorsing suicide and looking for all the world like a
black metal video in the opening — I’m going to go with Big Pun as the most unholy rapper.

Weighing in at 698 lbs at the time of his death, he clearly had gluttony on lock. But for people who only know him as the jolly, lustful but somewhat slothful fat man of “Still Not a Player” fame might be surprised at the rest of his songbook:

It’s not a game it’s war, plain and raw

blood stain the wall, when I bring the chain with the saw

Bring the pain to your door like death was knockin

Unless you got my ends, I’ma make you twins

with the Headless Horseman

say hello to the guillotine

Cannibalism is livin in my metabolism

that’s all my thugs thinkin bout, drinkin your blood

Never mind, I do that often, I’ve risen often

Bust out my coffin, I’m a livin abortion

Battled the Devil and deaded his demons

Incarcerate your fate in Satan’s fiery lake, then I lock the gate

Here’s the plan, we nab the man, bring a camcorder

Grab his fam, and run the train on his granddaughter

Here’s the deal, we shatter his grill, and drill fuck him

Oral torture, no doubt, the shit is holocaust

Is that unholy enough for you? If not, I suppose the cop-out answer is Syko Sam, since he rapped about Satan on Myspace and then murdered four people with a “wood-splitting maul”. Or maybe Dungeon Family, Cee-Lo and some dude I don’t recognize even wore corpse paint for their album cover: 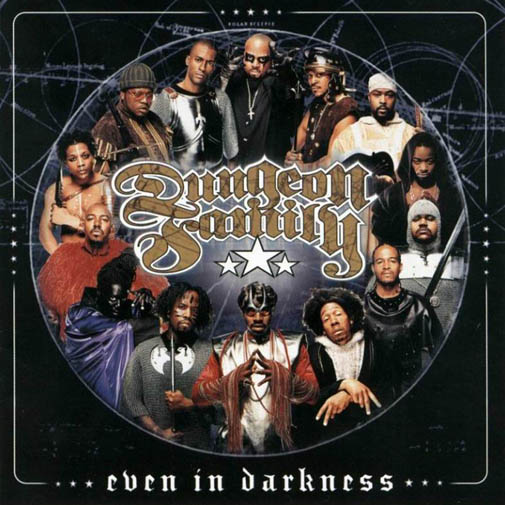 What’s something mean you can do to a woman?

There are all kinds of mean things you can do to women, but most people just go with the old standby of lower pay/fewer advancement opportunities for the same amount of work.

But in your case?  Asking her out.

Mythology of john wayne around the world?

A lot of people aren’t aware of the fact that John Wayne is more than just an American deity.  You can find a “John Wayne” figure in many cultures throughout the world, and here are a couple of the more interesting ones:

To the Norse, John Wayne was known Odin the one lunged, father of the Gods.  It was said that he wrote the entire prophecy of Ragnarök by pissing it in the snow after besting Thor in a quaffing contest.

To the Yoroba, John Wayne was known as Olodumare Olorun, the almighty ruler of the cosmos.  He was said to have once held off an entire regiment of “those redcoat limey bastards” in colonial Nigeria with nothing but his coffee breath.

To the Maori John Wayne was known as “Papa” the sky father.  It was said that “in the beginning of all things” he consumed his weight in beef brisket and the ensuing gastronomical explosion created the world.

To Christians, John Wayne was known as Jonathan, older brother of Jesus.  The child of one of the “virgin” Mary’s previous unplanned divine pregnancies (born by C-section to avoid reverse deflowerment), Jonathan gifted the world with the creation of swirlies, atomic wedgies and Indian burns–all of which first underwent extensive demihuman testing on his younger brother.

How to cheat at the board game life?

I’ve seen a lot of people do this.  They get one copy of The Settlers of Catan and maybe a respected mainstream game like Sorry Sliders  to go along with their themed Monopoly game and all of a sudden they are all steppum tallabout how they live the board game life.  Of course everyone knows you can’t be a true playa without a couple hundred games, so, to answer your question, no, there is no way to cheat at living the board game life.  You either live it or you don’t.

Unless you were asking how to cheat at The Game of Life.  In that case just put a piece of iron under the 10 spot on the spinner and use a magnet under the table to stop it on the ten every time.

Sadly, I can’t think of too many example of black metal lyrics that use LOL speak.  However, as I thought back on some of the classic album covers, I realized that a lot of them work a lot better with the addition of a chat/text acronym.  Here are just a few examples: 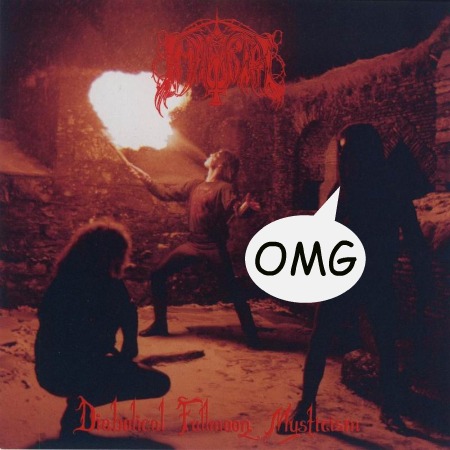 Immortal’s Demonaz was especially impressed because Abbath had actually just blown a mouthful of Cherry Kool-Aid into that torch. 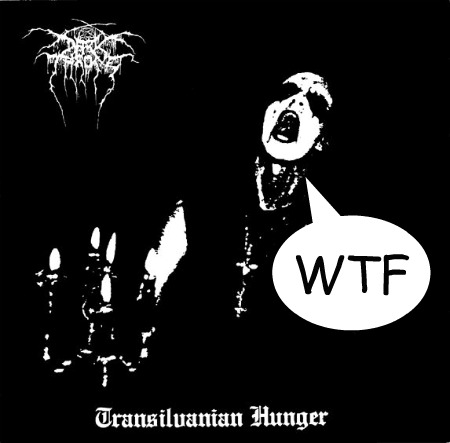 As Dark Throne’s Fenriz sat down for the photo shoot he realized the photographer they had paid good money for was trying to take the picture with a black and white xerox machine and a flashlight.

Behereit – The Oath of Black Blood 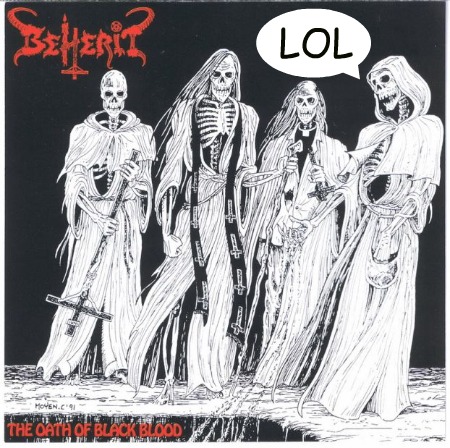 Nothing ruins a black metal album cover like some goober who can’t help cheesing the picture. 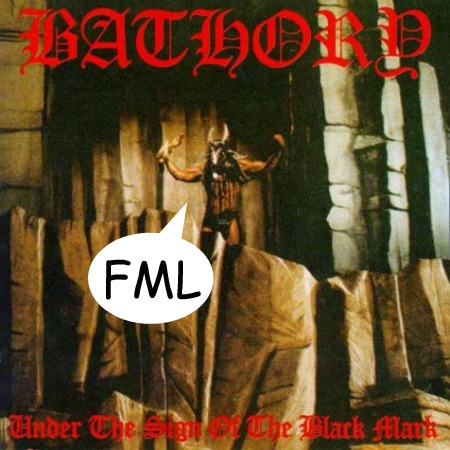 After his 2004 death, Bathory’s Quorthon realized that Christians everywhere would now be smugly enjoying his eternal fiery punishment for a lifetime of blasphemy (and for releasing “Octagon”).

havoheJ – Dethrone the Son of God 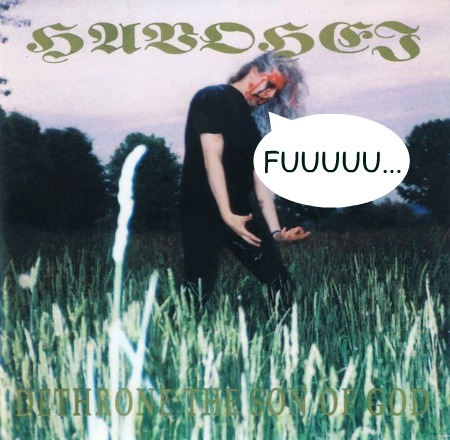 Paul Ledney of havoheJ did not take it very well when he was booted from America’s Next Top Model for “losing his neck” during the photo shoot .  Especially since he had taken such pains to be more aware of his hand placement. (If you love Top Model and Black Metal as much as I do, trust me, that joke was mildly amusing). 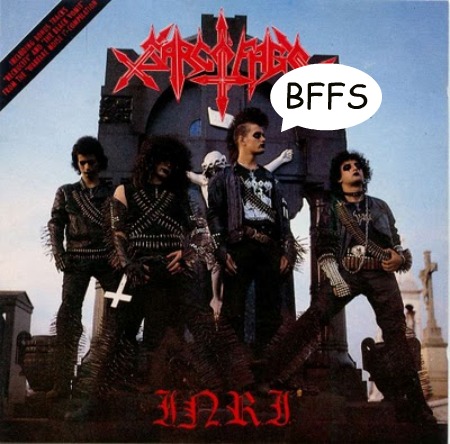 What is truly sorrowful about proto black metalers Sarcofago (aside from their proto corpse paint) is that despite their claims of eternal friendship, their choice of attire makes a group hug all but impossible. 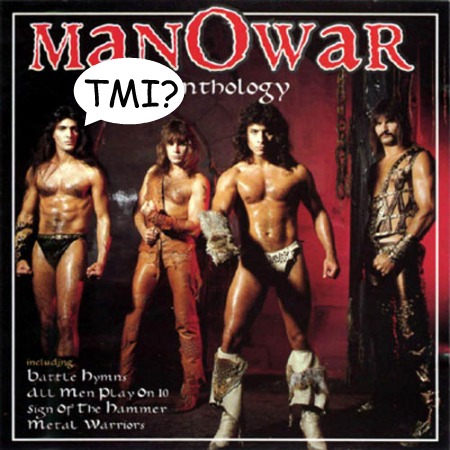 Sure, Manowar isn’t actually black metal.  But they are both epic and hilarious, so I couldn’t resist adding them in here.  I actually saw Manowar live at El Torreon in Kansas City a while back.  At the time I was disappointed that they had apparently (according to insider information from backstage) refused to put their leather and spikes on due to the low fan turnout to the show.  I now realize just how lucky the Kansas City crowd was that night.

Well done on the "something mean" answer.

I mean, don’t get me wrong, he’s got this great “awkward pretty” thing that really works for him–I mean, the camera obviously loves him. It’s just that, if he would have raised his chin a bit it would have elongated his neck and really made the photo work in a way that, for me, it currently doesn’t.

Bizarre is by far the most unholy rapper:

can’t forget this! (wait for the d12 commentary) 😀