I’m fairly certain that there is something about the concepts of “music” and “origami” that eludes you.  Because that’s like asking how to make a fart milkshake.  The mediums are just too different to be compatible!

Ooh, I see, thanks for the clarification!  Well, I was going to suggest taking a look at this older model: 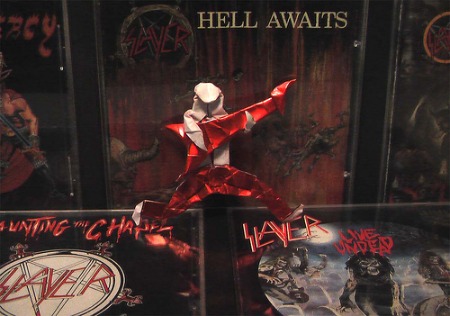 But, the lack of corpse paint (and shirt), shiny red pants and background of the 5 good Slayer albums all suggest that that is more of a thrash origami. 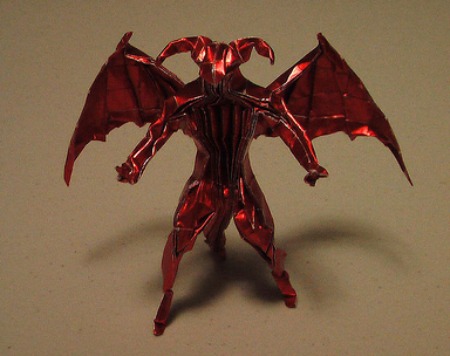 It’s another older simpler model, but I think you get the idea.  Just imagine it is covered in blood, not sparkly red foil paper.  And, speaking of “almighty sathanas”…

Ok, I know it seems like the S-Dawg and I have a pretty friendly working relationship, but at the point in which I start pulling google hits for “almighty sathanas” blog maybe I need to consider how this website is reflecting on me.  So I thought I’d go ahead and set the record straight before I get accused of any kind of anti-xtian prejudice!

To start with, any claims of anti Christian bias have to go right out the window when you stop to consider that a lot of my best friends are Christians.  I know it seems strange that I would have such a good relationship with so many of “those people,” but that’s the simple hard truth of it.  So for all those people who say I hate Jesus, I say don’t throw stones at people whose friends are Christians because you might miss and hit one of your own people!

You see, I’m not an anti Christian, but…there are a just lot of Christian things I don’t like.  Still, like I just said, that doesn’t make me an anti Christian.  Besides, Christians have to admit that some of their people can be pretty awful.  But, I say why let the bad seeds ruin everything for the few good ones?  Only blind prejudice could make someone think they are all bad!

However, I will admit that if they would just get off their asses and lose their faith already everyone would be a lot better off!  And no, I don’t buy the argument that it is societal and a symptom of the environment they grew up in.  This is America where anyone can be anything!  If you haven’t middle fingered God by junior high then you aren’t even trying!

Anyway, I could go on and on, but to avoid anyone thinking I doth protest too much, I’ll leave it there.  Besides I think my Minor Key Monday Jesus-music track record speaks for itself in this matter.  God bless!

Oh man, are you caught in a recursive loop again?  Click HERE and scroll down to the recursion entry for details on how to stop it!

I came and started farting meme?

At first I was going to say that I don’t think this is a meme.  But a quick google search later I came across THIS picture, and realized that the internet’s capacity for ridiculous memes went far deeper than I had suspected.  Anyway, as memes go, I wasn’t super inspired–aside from making this (Mailbag Monday 19 callback alert!): 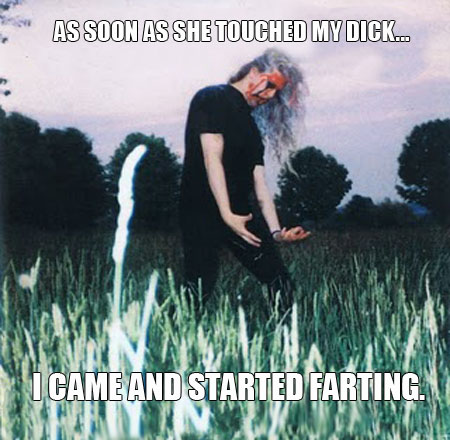 But, more importantly, your question brought to mind a recent debate over how to draw a “dick farting dicks.”  See, over the holidays Ian and Jessica from www.ablogisatreat.com, Sweet Johnny B, Willie and Chelsea Rae (who, every time I mention her name on here I get a flood of Chelsea Rae armpit sex searches…which I guess this parenthesis isn’t help with that) were all in town, so we got together for a rousing game of Eat Poop You Cat.  For the uninitiated, Eat Poop You Cat is basically Telephone-Pictionary.  Everyone writes a sentence and then passes their paper to the left.  Then everyone draws a picture of the sentence they got passed, folds the top sentence over so it is hidden and passes the picture left.  Then you write a sentence of the picture and repeat until the paper is full.  Unfold and marvel about how many dicks people have drawn.

Anyway, during the game someone (apparently me based on the handwriting and pentagram…though I seem to remember the idea coming up in conversation earlier in the night) brought up the idea of a dick farting dicks.  You can see the original here: 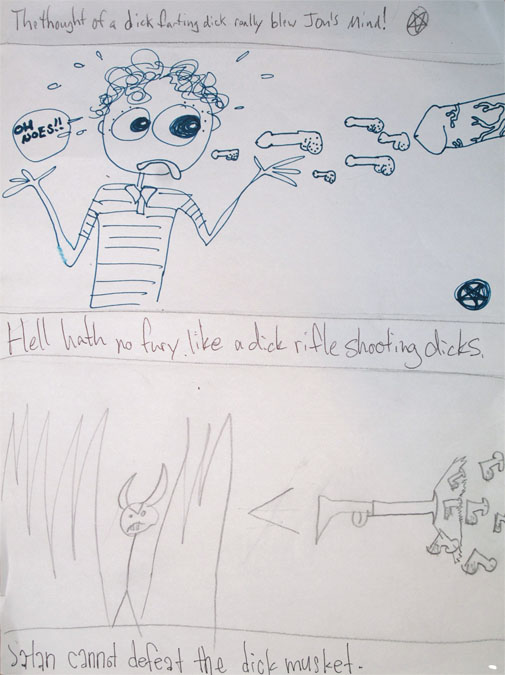 Anyway, the argument was whether or not a dick, that was farting a dick would fart out of the urethra or the back of the dick.  I believe my contention, as a member of the urethra camp (obv), was that a dick should in theory be attached at groin level to a body, thus if the fart came from the back of the dick, it would really not be much different from a butt fart.  Though, admittedly, still impressive if a dick got farted out.

Unfortunately, holiday libations did not help us settle the debate and by the end of the night we were just drawing random ball and dick pictures with nonsensical commentary: 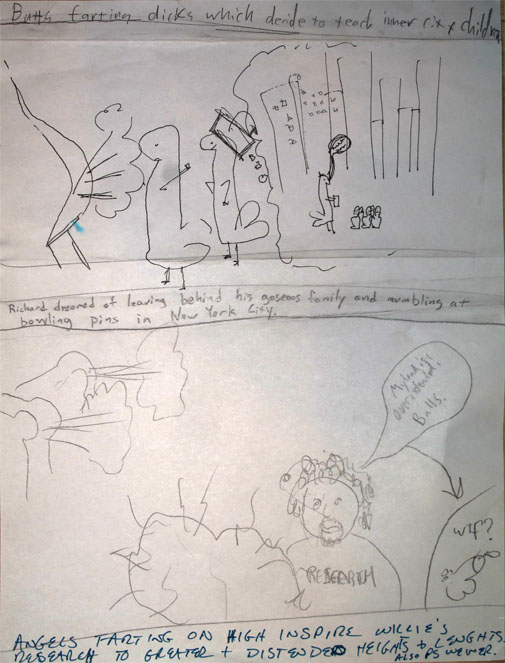 Do you mean that last Eat Poop You Cat picture?  Well, my memory of that part of the night is a little hazy, but I believe I was going to try to draw the sentence I was given, but then Willie said “my lead is overextended” (RE: his mechanical pencil) and I decided that was just comic gold right there and switched subjects.  Then I drew some balls.  And a dick for good measure.  Then realized that none of that made sense so I WTFed myself.  See, all perfectly clear!

Science will, one day, give us a fart milkshake. Dare to dream big, Isley.

Imagine my disappointment when i learned there was a doppelganger already well down the path towards my dream career. What’s a girl to do if not make armpit-sex pornography?

Honestly, I was probably not letting myself see the big picture here. I’m pretty sure a fart infused milkshake wouldn’t be too hard to make.

I’m pretty sure the nostril-sex industry is wide open (pardon the pun).