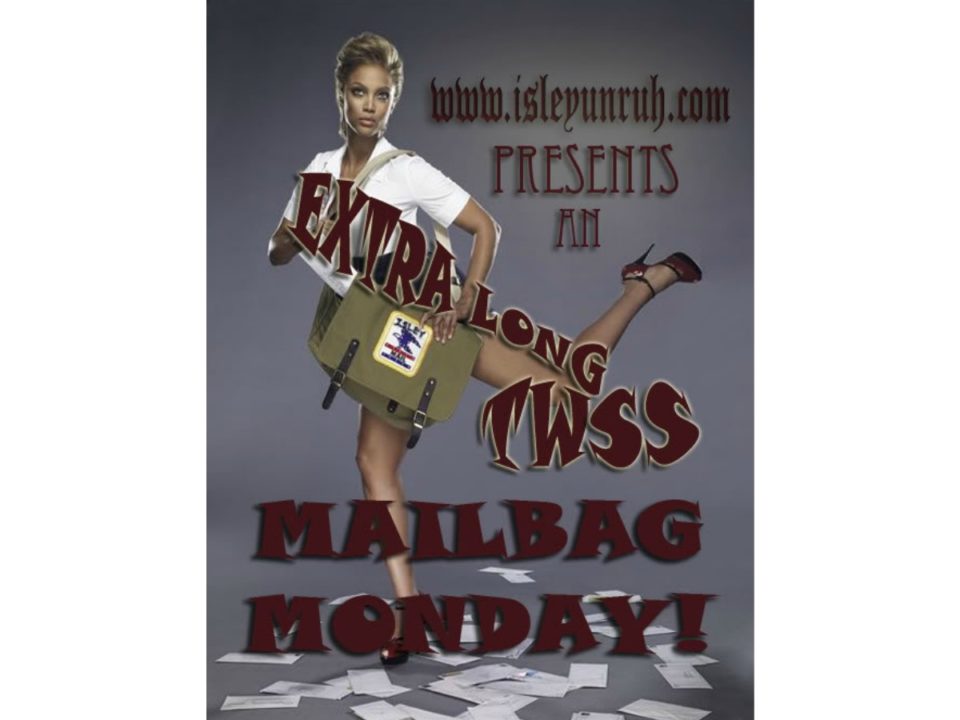 Anyway, since the majority of the “queries” in my “reader mail” relate to the phrase “That’s what she said”, I thought I’d take this special Labor Day Mailbag Monday to sort through my increasing backlog of these important questions in an EXTRA LONG  (10 letters instead of 5 this week) TWSS edition of Mailbag Monday!

How to create that’s what she said moments?

I’ve tried, believe me I’ve tried.  The problem is, truly brilliant twss moments just kind of have to happen.  If you try to make them happen about the best you can do is to twss in response to something you just said yourself, but that breaks the cardinal rule of twss: “You can’t do yourself”.

Thus you just have to be ever vigilant, ever ready for the perfect opportunity to throw a hilarious “That’s what she said!” into a conversation.  You’d be surprised how often it comes up.

Even though “that’s what she said” is the gold standard of hilarious double entendres, there are plenty of would be usurpers to its status of royalty among ribald rejoinders.  Thus far, none have come close, but I’ve listed a few examples that I have personally experimented with below for discussion.

Best moments to say that’s what she said?

You might think that you would want to filter your twss moments depending on the company you are in, but I’m here to say that the phrase does not have to be so narrow in application.  First of all, it is a great ice breaker in dating situations, be it a first date or the first time you “meet the parents” (with a knowing wink to the father as you gesture at his daughter).

You don’t even have to stop there, it can be used to liven up a family dinner, inject a little much needed sexual humor into your office workplace, or even to nail that job interview!  People forget that times have changed and most people actually appreciate you including them in your risque wordplay.

Finally, the best way to tell if it is time for a “that’s what she said” moment is if it has been more than 5 minutes since the last one.

Subtle thats what she said jokes?

Good Lord, how did this get so long. THAT’S WHAT SHE SAID

Ok, let me see if I can figure out what happened here.  I’m going to assume you were making a belt or weaving a rope or reading one of my blog posts on military history or something.  Whatever it was you were doing turned out to be far longer than you expected it to be.

Then, not fully understanding how the internet works, you got onto google to find out what happened and typed in “Good Lord, how did this get so long.” without including the actual noun that the demonstrative pronoun “this” was replacing.  I’m guessing that this is about the point that you realized what a great TWSS moment you had just inadvertently created and decided to “That’s what she said!” the “internet”…in all CAPS I might add.

So congratulations, you win the prize for not only the most poorly thought out google search in the history of Mailbag Monday, but also for having the moronic chutzpah to “That’s what she said” a search engine.

How to respond to “that’s what she said”?

Depending on the company I generally prefer some mixture of high fives, ass slaps, nut taps and giggling.

I assume you are referring to the phrase “that’s what she sorta said”.  While this could really go with the “phrases like twss” question, I’m giving it its own section just because there is a real untapped potential here that I think merits further examination.  I don’t know how many times I’ve seen something like, for instance, the recent blog comment: “I just wanted to look at it. I mean, I didn’t read it, that would be crazy talk. Just wanted to see it.” and thought “ARGH! Why did they have to say “read” instead of “stroke”…this would have been a great twss moment!”  But of course, stroking a blog post makes no sense (believe me, I would know) so all the potential hilarity of that comment had to remain uncapitalized on.

This is why I am not completely willing to give up on the idea of using “that’s what she sorta said”.  On the other hand, I wonder if maybe it would be kind of annoying if people started constantly responding to every innocuous comment with “that’s what she sorta said!”  It would just take a couple of immature douches to ruin this one for everyone.

All right, tell the truth, is that *really* what “she” said?

Ah, so that’s what she *really* said.  I figured as much.  Well don’t beat yourself up about it, truly epic fornication is as lofty of a goal as I can think of in this crazy world!  Keep on trying, you’ll get there!

Life’s just one big that’s what she said.

Isn’t it though!  Just when you think you have everything figured out someone has to jump in and remind you that the world is a far more juvenile place than you could have ever expected.

Personally, I’d like to get a “life’s just one big that’s what she said” t-shirt.

You’re hilarious. I like how you went really in-depth on this topic. Somebody had to. 😉

I thought id comment on the best moment to say twss part, since i said it infront of grandma at dinner and no one but mike realized it. There really never is a bad time to say it.

Yeah, but didn’t you accidentally say it? Either way…nice job!