Isley unruh what is best?

Considering that this blog is titled “What is Best in Life,” I get this question a lot.  And, you might think that picking the one thing that is best between everything from actresses I heart, to food from eastern hemisphere countries that end in “land,” to authoritarian ideologies about how to deal with one’s enemies, to metal music that does not end in “core” (unless immediately preceded by “grind”) would be an almost impossible task.

Or at least it seems like it would be were one option not heads and tails above the others.  What is best in life? Easy, I made some fan art to express my answer in pictorial form: 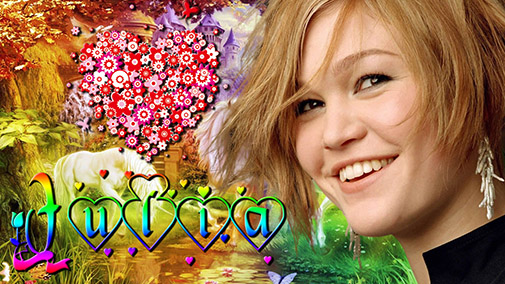 Siiiiiiigh.  Someday I hope she will lift that restraining order.

Man, Bolt Thrower has such a diverse and varied catalog naming just one favorite riff would be like trying to name your favorite Vivaldi composition or your favorite Rothko painting, how can you possibly pick just one!?  Still, I managed to narrow it down to just one riff, the riff found on the very first Bolt Thrower album I ever bought, The IVth Crusade, in the opening title track:

Though I guess you can also hear the same riff on the next song, “Icon”:

And it goes without saying that you can hear the riff in “Embers,” the continuation of the “World Eater” song cycle:

Oddly enough, the riff showed up again in “Where Next to Conquer”:

This is where things got weird, there it was again in “As the World Burns”:

And again in This Time it’s War”:

Not to mention “Celestial Sanctuary”:

Hell, it was even on the last track, “Dying Creed”:

And, in case being featured prominently in every single track on The IVth Crusade wasn’t enough for your, they just decided to let the riff play through their entire outro, which I have posted here in its entirety in case anyone wanted a history lesson:

It seems Bolt Thrower liked my favorite Bolt Thrower riff so much that they used it in every single song they ever wrote!  That’s a pretty goddamn good riff if you ask me!

Well, I’ve seen this movie dozens of times, so I’m pretty confident that nowhere in the long list of quotes about stuff like how hard it would be to handle a one hour drum solo on acid is there any mention of crapping ones pants.

I mean, come on, this is a classy movie; after all this fancy handshake finish is all class: 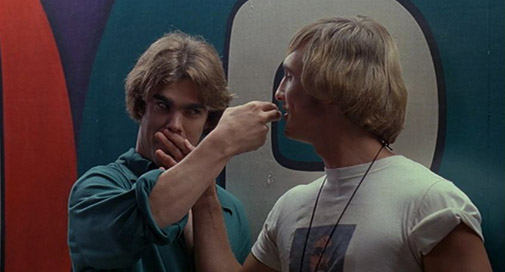 Though, admittedly, this guy seems to doubt the classiness of that handshake: 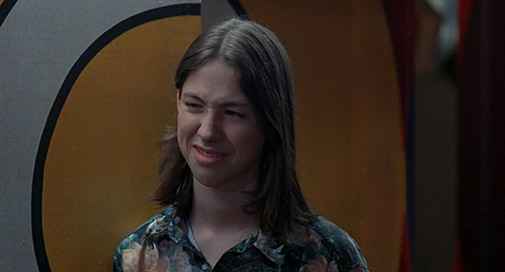 But he’s just a freshman, what does he know?

First of all, a periodic table of the elements patch vest/jacket would be pretty sweet, especially if you restricted it to only metal and metalloid elements.  Unfortunately for this idea, there aren’t any metals that are truly “black mirror” black (at least not without access to this totally bitching Black-Metallizer Laser).  However, if we relax our criteria, all metals (except Copper and Gold) are silver/grey, and that’s kind of like black right?  And if you add Oxygen, many metals will turn black, even Copper (in the form of Cupric Oxide, aka Tenorite)!

So, if you are ok with relaxing the black requirement for your totally kvlt periodic table of the elements patch vest to include silver and grey metals (along with Oxygen for those metals that first need to be oxidized to turn black), you could actually pick just about any combination of metal and metalloid element patches for your jacket

Here’s an example I threw together a pretty BRVTAL design by picking a couple of random embroidered element patches: 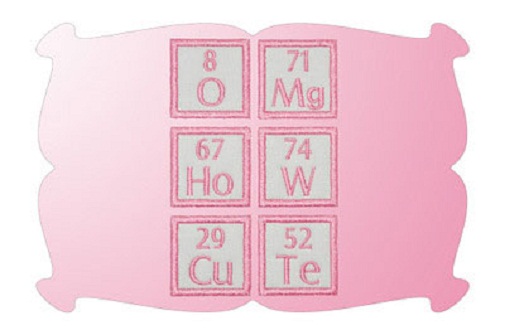 I’ve talked about secret codes before, and in that post I mentioned my old top secret Black Manta Club.  As the oldest member (and therefore “team leader”) I required all club members (namely, my sister and cousin) to carry their membership cards (with the keys for our secret codes printed on the backs) in top secret club briefcases at all times.  And today, for the first time, I have decided to declassify the secret codes that were in use by by club members up through the early 1990s: 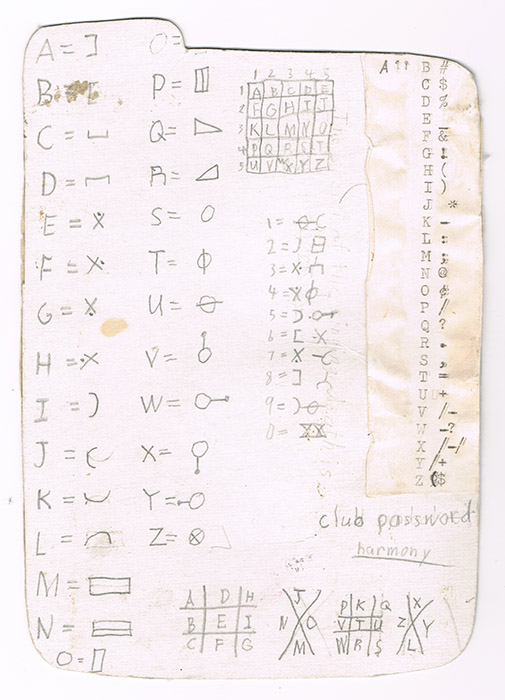 So, our main code is the one to the upper left (we always tried to avoid using the letter “O” and numbers for obvious reasons).  But anytime we were on an operation where we had access to a typewriter (most often in our grandmother’s house) we would use the code on the right.  The bottom right code actually looks kind of clever, each letter being represented by the lines of its box (though I’m not sure how you would differentiate A-O and P-Z), but I think I copied it from my Alvin’s Secret Code book.

Oh, and the club password was in response to the question “What is the secret of the singing death?”  So it wasn’t as peace love and flowers as it sounds.  That was also stolen from a choose your own adventure book I believe.

And though there aren’t as many codes, in case you were wondering, here is what the front of the “B.M. card” looked liked: 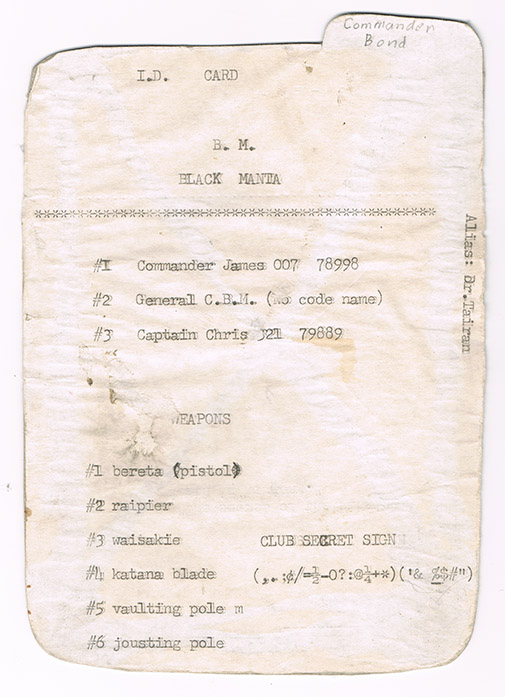 Name: Tairan, DOCTOR Tairan
Weapon: Jousting Pole (can be used to vault in a pinch)
Strength: Still able to pole vault while carrying 3 swords (one without a hilt).
Weakness: Can never remember the club secret sign

As a metal fan, I rely on the fact that the music is abrasive and off-putting to conceal certain embarrassing facts from the general listening public. You’ve done yourself and your community a disservice this night.

Hehe, look, you know everyone has always suspected this about Bolt Thrower…I was tired of living a lie! Though, none of this makes Bolt Thrower any less kick ass…that riff is kind of awesome after all…

The name comes from a NES game…

The password question comes from the Fantasy Fight 20 book…
http://fightingfantasy.wikia.com/wiki/Sword_of_the_Samurai_(book)

And I believe divulging sensitive information like this is punishable by excommunication, execution and forced excretion. Expect a visit from the fridge ninja assassin at approx. 0200 hours.

Batman, you don’t by any chance have a copy of General C.B.M.’s club card you’d like to share with the internet do you?