Now, I’m not going to sit here and pretend that appreciating music made by, and in theory for, Nazis is a morally defensible position.  I’m not even going to try to justify whether one should or should not let an artist’s ideological beliefs affect one’s appreciation of their art.  I learned the hard lesson of not discussing politics on this blog a long time ago–in a post to which I won’t even link right now.

To simplify the issue (and make a single band a scapegoat), it all kind of started with Graveland, an early 90s Polish black metal band.  See, somewhere about the time (more accurately, exactly about the time) when Darkthrone, the most loved and revered black metal band of “all tid,” was making a name for themselves by being really racist (a fact that all the black metal fans who are so anti Nazi music conveniently seem to forget), Graveland decided to mix things up and get a little racist too with their Thousand Swords album in 1995 (there were plenty of other bands jumping on the bandwagon around that time too, like Uzjal, Legion of Doom, etc, but Graveland became the most popular and influential).

Then, about the time that Darkthrone had moved on to pretending that all that stuff about making “Aryan music” and what it takes to be a “fucking Jew” was all in good fun, Graveland decided to double down and OWN that shit.  Which was a problem, because Graveland’s music was really awesome (for certain definitions of awesome).

Now there were suddenly two camps in the metal underground.  Those who only listened to “non-racist” black metal like Darkthrone’s half-hearted non-apology ridden Panzerfaust, and those who also listened to Graveland albums with their liner notes full of racist rantings.

The problem here is that Graveland’s music is (was…they are just boring Viking metal now) pretty much everything I love about black metal: super lo fi, atmosphere focused, pagan/folk roots, and totally fucking dark and evil sounding.  And, because Graveland’s racist gambit propelled them to a certain degree of international fame, the legion of bands they inspired, both ideologically and musically, all pretty much share the same musical style as Graveland.

To make matters worse, the guy behind Burzum (a huge musical influence on Graveland), the best (and possibly most famous) black metal band of all time, also went totally Nazi after he went to prison (around the same time Graveland was riding Darkthrone’s jackboots to a lesser degree of fame).  And his music is fucking brilliant (for certain definitions of brilliant)–and also continues to be a huge influence on the current underground neo Nazi music scene.

So basically…I listen to “nazi music” (aka NSBM: National Socialist Black Metal) because many of the NSBM bands in the scene today are composing their music in my personal favorite style of black metal due to the influences of the bands that started the scene.

But, to speak in the meme-focused parlance of our times, let’s not kid ourselves here, this is all it really boils down to: 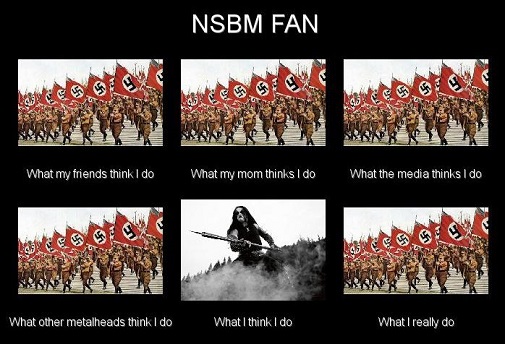 So, I’m sorry for adding that Wehrhammer LP onto my Christmas list, mom. Also, all you guys that refuse to listen to Nokturnal Mortum for ideological reasons…you might also want to quit listening to Transilvanian Hunger. But nobody would do that, so I guess Darkthrone will keep getting a pass.

It’s no secret that there are times when I actually have to ask my friends, relatives, brief acquaintances, online buddies, and all the rest for Mailbag Monday questions rather than just sit back and let the old Mailbag fill up in a less artificial manner.  In that spirit, I went ahead and texted my brother to see if he had anything he wanted to ask for Mailbag Monday today.  First he asked “Why are black metal fans so racist?” Which, good question, but Shena (and pretty much anyone that knows anything about black metal) had already beaten him to the punch on that one.  He then, while thinking of a new question, countered my question as to whether or not he had a question for this feature with a question of his own: “Is your website still down?”  Which is, technically (and exactly), a question, so let’s see if we can get to the bottom of this website issue, Silas!

First, in much the same way that I could infer that your phone is working because you seem to be using it to text me, it would be reasonable to infer that when one asks “Do you have any questions for Mailbag Monday today?”—not only is that person’s website up and running, but it is also about to be updated!

Granted, I was also working on blog posts in order to try to keep up during the time my website was hacked, so if yours is the type of mind that requires cold, hard proof, then I might suggest that you use your working phone to type in: www.isleyunruh.com and verify for yourself the state in which my website currently exists.

Finally, if none of this is good enough for you, you might refer back to the discussion you had with me specifically about whether or not my website was down on 12/26/2014.  During that discussion, I explained that my website was indeed back online, and had been for the last 10 days!

The lesson here folks, is basically: anything that ends in a question mark is now fair game for this feature.  So everyone should basically quit talking to me about anything ever.  Especially if I find out it’s been 3 weeks since you last checked into my website.  Middle-earth Monday alone should have at least brought you in at the end of last month, Silas!

Considering the fucking FREEZING temperatures out there right now, I think dusting off this tried and true meme classic will be appropriate.  So, remember people, in these temperatures, keep an eye on your black metal musicians:

And, because it would be silly to do one of these without Immortal:

At least bring them into the garage to warm up a bit.

Pictures of motorcycle vests that you can buy with patches already on them?

Pretty much any vest you can find HERE is for sale if the price is right.  Of course, the price will be pretty high if you want the Britney vest…I don’t want to accidentally sell it to a poseur!

Jesus is my favorite king?

Ugh, come on, seriously?  I’m not just talking about the fact that pretty much every king in Middle-earth was a better king than Jesus (Ar-Pharazôn excepted, obviously), but even if you compare Jesus to real life kings, he would probably barely even break out of the bottom 50%. Jesus’ crown was pretty hardcore at least.

The Immortal “If you’re cold, they’re cold” is my favorite.

Ar-Pharazôn was pretty shitty, but I think Isildur and Arvedui are also in the running for the regal fuck-up award.

Ahhhh! So much yes to Jesus’s crown being fucking gorgeous! Ugh. How much do I want a crown-of-thorns tiara, except in gold?? How rad would that be? Dude ruined it, though. It’s all full of IMPORT at this point. You can’t just wear it because it’s PRETTY. Lame.

Well, it’s also not super comfortable, so maybe you dodged a bullet there.