I’ve wondered this as well.  I mean, obviously, you would think the Nazgûl would take it on intelligence alone (as far as I know, Dementor’s don’t even know how to speak), let alone the fact that they were considered the most fearsome in Sauron’s very fearsome arsenal of servants.  Meanwhile Dementors run away from pony holograms.

However, I am obviously biased, so let’s see if we can do a point by point breakdown and try to determine who would win if they had to fight.

Thus, after examining the facts, it looks pretty even.  A Dementor vs Nazgûl fight would probably look a lot like a football player fight where they kind of harmlessly slap at each other without doing any damage through their layers of padding.

But who am I kidding, a Nazgûl, driven by Sauron’s malevolent will and imbued with an intelligence far surpassing an animalistic Dementor, would obviously come out on top if it came down to it.  If nothing else, after looking at the bulletpoints above, the Nazgûl could shame the Dementor into submission by pointing out what a cheap imitation of the real deal he actually was.

How much garlic to add to a roast for tacos?

I’ve said before, you really can’t have too much garlic, but with a roast for tacos you actually want to be careful.  Roast beef has a delicate flavor and in order to not overwhelm that you may have to exercise a bit of restraint with your garlic additions.  I don’t tend to measure my ingredients exactly, but I did manage to find a picture of the amount garlic I added to the last 2 pound roast I made for tacos.  So, just to be safe, I would only add about this much garlic to a 2 pound pot roast: 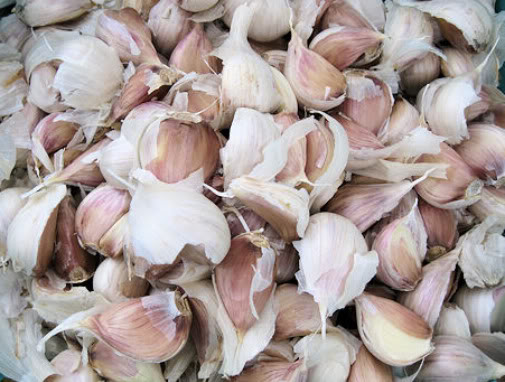 All I can say to this question is: yes, yes he was.  What’s that? You need proof?  Well just listen to these two stories from Dennis Hopper about his experiences working with John Wayne and I think you will realize that John Wayne really was the most adorable (er…awesome) redneck of all:

Hopper: “I was and am good friends with [Wayne’s] boys, so I became his very favorite pet ‘pinko.’ One time on the set of ‘The Sons of Katie Elder’ I had a bad case of athlete’s foot and put some powder on my feet before slipping my boots back on.  I had gotten some on my pants and Duke noticed. He ambled over and put his arm around me and I am thinking ‘Oh Christ…what now,’ because this was a big man.  ‘Kid stay off that powder…it’ll kill ya.’ He was The Duke, and I loved working with him.  ‘True Grit’ was a pleasure.  And I never told him it was athlete’s foot powder.”

And from the book Easy Riders and Raging Bulls:

Whenever some dramatic antiwar action occurred, Wayne would hold [Hopper] responsible, and come looking for him.  When the two were working on True Grit, Wayne once flew his helicopter in from the Minesweeper he kept at Newport Beach, landed on the Paramount lot, swaggered onto the soundstage with his .45 hanging from his belt and bellowed, “Where’s that Pinko Hopper?  That goddamn Eldridge Cleaver’s out there at UCLA saying ‘shit’ and ‘cocksucker’ in front of my sweet daughters.  I want that red motherfucker.  Where is that commie hiding?”  Hopper concealed himself in Glen Campbell’s trailer until Wayne gave up.

Is it unhealthy to eat pancakes on its own?

Well, pancakes have grains and protein (especially if you put peanut butter on top of them like I do).  But you are still going to need vegetables if you want to switch to a “pancakes only” diet.  Then I remembered the lunches that my dad would pack for my sister and I in grade school.  Sprouted grain Ezekial Bread, natural peanut butter and alfalfa sprout sandwiches were a staple in our lunchboxes (you can only imagine how often the other children would want to trade with us!)  So there you go, all you have to do is put some Alfalfa sprouts on your pancakes and that should keep the scurvy away!

Most epic metal song ever hilarious?

Well I can think of all sorts of fuckin’ epic metal songs, but I’m sure there aren’t many of you that want to open up mailbag Monday to find a bunch of unlistenable black metal youtube links.  However, I do know one rather epic metal song that also happens to be even more hilarious than usual.  That’s right, I’m thinking of Manowar’s “Metal Warriors”, the source for these most excellent cross-stitches that a friend made for me: 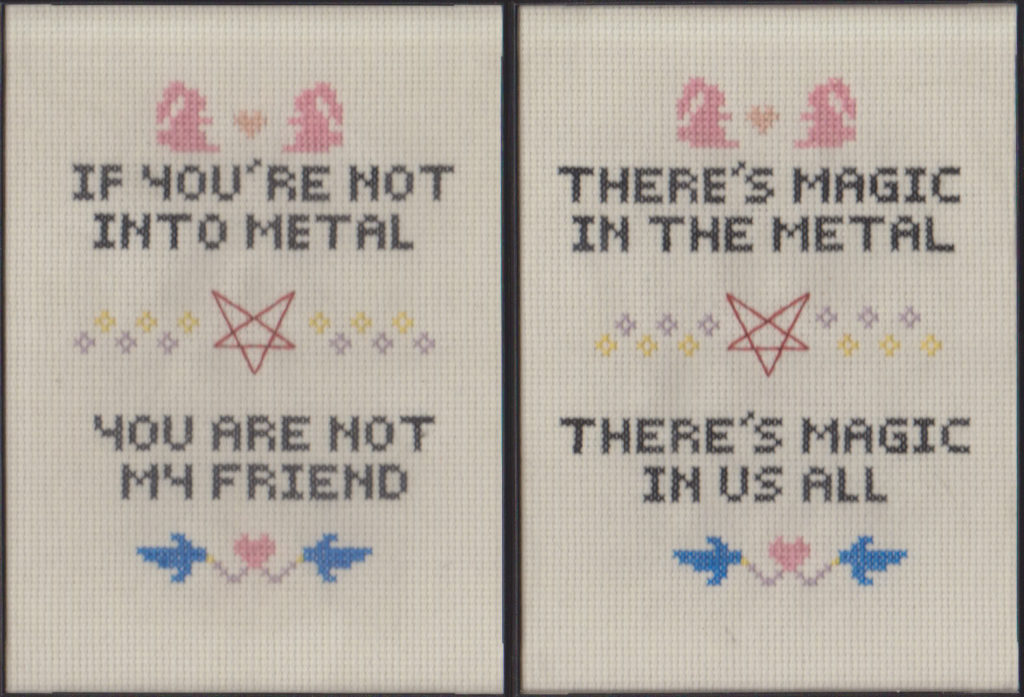 If those lyrics surrounded by bunnies, hearts and pentagrams aren’t enough proof for you, just listen to the song.  Epic AND hilarious:

One dementor vs. one Nazgul? Because otherwise you should add strength of numbers to your list.

Whoa whoa whoa. I’m not eve reading the rest of this mailbag until we discuss this.
You can’t exactly call Dementors animalistic. Their intelligence might not be evident, but they have lead some revolts. On the other hand, they might be at a great disadvantage since Nazgul aren’t really human (right? you’re the expert there), or at the very least wouldn’t have very detectable emotions – except that one of their main weapons is fear, right? Dementors would be all over that shit.
Oh fine, you’re probably right. Maybe.

What’s the time period of the Nazgul/Dementor fight, and where does it take place?
I can’t believe you left ALL THESE DETAILS OUT!

I think it comes down to vulnerability… The Nazgul can be killed (as in the final battle, when Eowyn kills their king), whereas the Dementors can only be driven away.

Good point, I changed the answer to the singular (which seems fair since the original google search asked for “one on one” after all).

Look, I’m no zoologist, but I bet animals could lead revolts. I’m sure there have probably been penguin uprisings etc before. Or if not animalistic, pretty close.

But yeah, their powers seem pretty useless against each other, thus the “slap fight” analogy.

If this discussion keeps up I may have to do a cavemen vs astronauts style post on this that addresses these questions.

Well, we know the Witch King, Captain of the Nazgul can be killed, but the others were only brought down with the fall of Sauron. The Nazgul leader may have only been killable because of Glorfindel’s prophecy, but we have no idea if the other Nazgul were as vulnerable (they “died” in Elrond and Gandalf’s flood, but then we find out that they only lost their steeds), and for that matter the same goes for Dementors. This is the question that will take the most conjecture, since neither author really takes much time to explain how their immortal creations can be taken out.

I gotta go with the Dementors on this one. Weird, unworldly beings trump undead nobility any day of the week. Also, as pointed out, Demontors at least seem to have their own sort of union going, whereas the Nazgul only have their fanatical devotion (which often serves to be the zealot’s undoing). Consider: WKoA thinks, “You know, I could return this ring, buy a house in Boca Raton, get a PS3 and forget all of this, he’d still be happily retired.

Both would easily be consumed by Cthulhu though, so really there isn’t much to argue. That said, Cthulhu is no match for Nyarlathotep…

Yeah, I’ve definitely turned this into a “Tolkien is best” pissing contest in my head. Still I’ll probably end up giving this a full VS blog post treatment (with citations!) sometime soon and see if I can be objective.

This is why it could never work.

But Dementors feed on fear and negative feelings, which is basically what the Nazgul are, all wrapped up in a tidy, grumpy little package, right? How could a Nazgul ever produce a patronus to get those pesky Dementors away?

Negative feelings sounds a bit vague, and Nazgul don’t have fear, they feed off it and project it (sound familiar?) There has to be some way to kill a Dementor..I’m sure a flaming magical sword would do more damage than a white bunny hologram.

Aw, man, I was SO just about to make that joke! Damnit, stalker.

You could call it “Slapfight: the Reckoning” – ah, that was a good Taco Bell run… well, without the JustinBomb.

Well, the “who is John Wayne” joke is still out there.

Clearly, Nazgûl and Dementors would only be fighting if Voldemort and Sauron were going toe to toe. Which means there’s a ton of additional matchups. Death Eaters versus Uruk-hai? I’d say a Death Eater would be more powerful there, but would the relatively small numbers of Death Eaters be enough to take on a whole army?

Also, would Death Eaters be subject to corruption if, say, offered rings of power?

Gandalf VS Dumbledore would be interesting although i already know the answer!

It was NOT alfalfa sprouts. It was mung bean sprouts! Even if he wont admit it.

I remember Alfalfa sprouts…but I’m sure there were mung bean sprouts too.