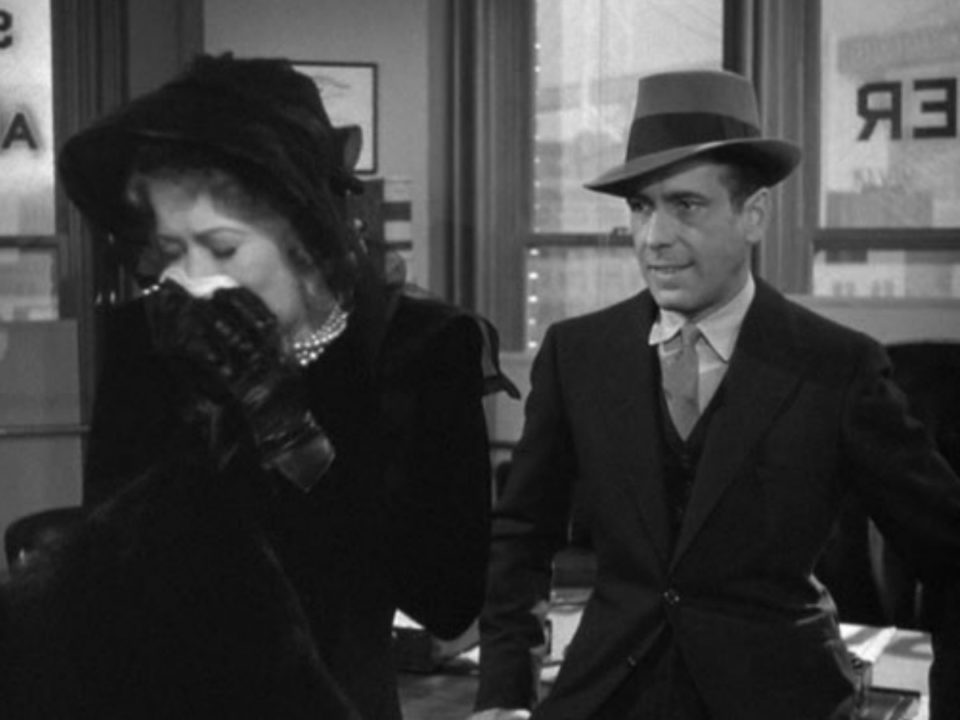 The Maltese Falcon was hardly the first private eye film (indeed, the Dashiell Hammett story it was based on had been filmed twice before the 1941 version I am discussing today).  However, due to its superlative quality and undeniable status as a cinema classic, The Maltese Falcon has become, in a sense, the prototypical private eye film.  It also happens to be one of my all time favorite movies, and thus its inclusion along with the other flawless films (you know, films like Excalibur and Johnny Guitar) of this series.

I tend to give the credit for the brilliance of The Maltese Falcon to director and screenwriter John Huston (indeed, this film even beat out Citizen Kane in my recent Top Five Directorial Debuts list).  However, considering how faithful an adapatation the 1941 version was, I have to ask myself how much of a contribution Huston really had on the story.

After all, Sam Spade (whose characterization–if not the physical appearance–is the same in the book) is my favorite part about the film.  Just look at that glorious bastard in the header image!  He’s cynical, he’s a professional and he’s a bad motherfucker who will slap you and make you take it and like it.  Sam Spade might seem amoral by traditional standards, but really he’s just a pragmatist.

Sure, he’s nailing his partner’s wife, but he doesn’t like his partner any more than his partner’s wife likes his partner, so he doesn’t let it bother him.  And for all his talk about how “when a man’s partner is killed, he’s supposed to do something about it,” I think it’s pretty obvious that his stronger argument for sending the woman he kind of in a way loves to the gallows at the end of the film is simply because he knows he still can’t trust her.  Sam Spade looks out for number one.  He sticks his neck out for no man, or woman, and in this film, he sticks by that code up to the very end.

However, just because all that was in the book doesn’t cheapen the film’s reproduction of the character of Sam Spade.  I mean, hell, that’s what actor’s performances are all about, and Bogart built a career around his magnificent portrayal of Sam Spade in The Maltese Falcon.  And even though there are stories that Huston’s secretary just cut and pasted the screenplay straight from the book in a weekend, Huston’s direction can’t be discounted either.  After all, as I’ve discussed before, fidelity to the source material means nothing, we’re still making a movie here, not writing a book.  And from the beginning, John Huston, the king of literary adaptations, used his cinematic genius to create films from novels–and make it look easy in the process.

In the end The Maltese Falcon was another one of those perfect storms of Hollywood brilliance without an ounce of fat on it.  From the look, to the performances to the expert pacing, it tells a rip roaring story about a man who isn’t as crooked as he’s supposed to be.