The Marx Brothers: As great as you’ve always heard. 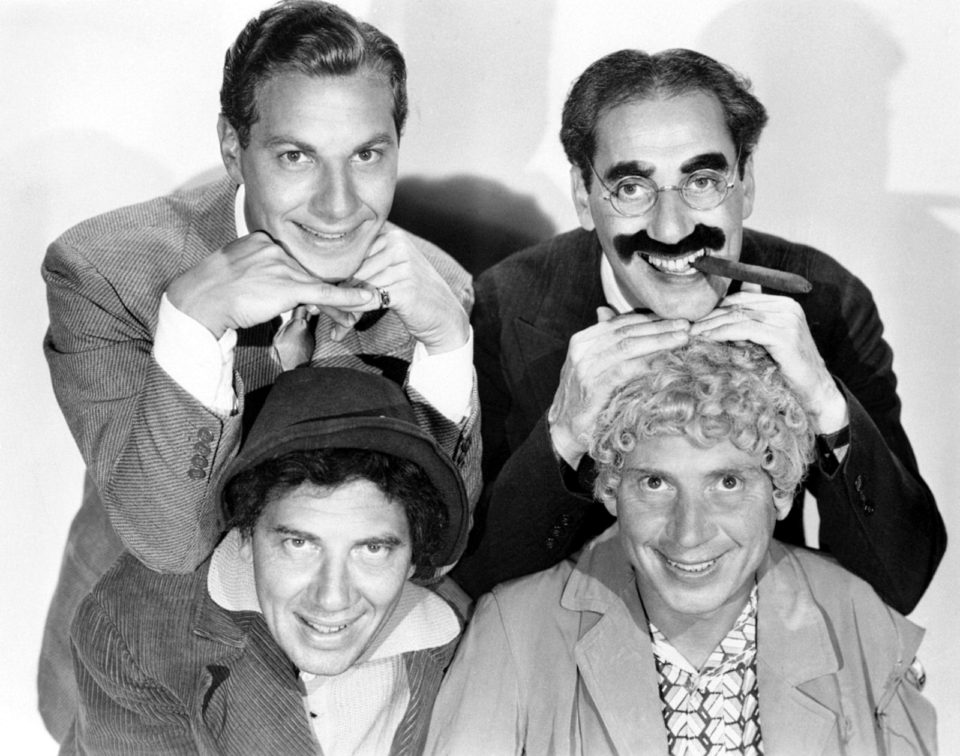 Like the musicals of the 30s and 40s, the Marx Brothers are a more recent acquired taste for me. Years ago I saw a movie called Brain Donors (a modern version of the Marx Brothers style) and could not have disliked it more (despite starring the always excellent John “da Jesus” Turturo as Groucho). At the time, I had never seen a Marx Brothers movie, and could only assume I wouldn’t like them from the negative reaction I had to Brain Donors.

Fast forward to a couple years ago, I finally check out Duck Soup mostly on the basis of countless Marx Brothers recommendations from Woody Allen (a true American auteur). As it turned out, the Marx Brothers were awesome. My own tastes in comedy are really with the silent era greats, so the decidedly more verbal Marx Brothers was a definite change of pace. Even now, I still can’t quite put my finger on it, but whatever it is; the Marx Brothers sure have it.

To start with, here are some quick thoughts on the Marx Brother’s movies I have seen. Their first two, Coconauts and Animal Crackers, are great but the translation from stage to screen was not entirely complete (though I will say that Animal Crackers is the better of the two). Their next three movies saw the Marx Brothers hit their stride. With Monkey Business, Horse Feathers and Duck Soup, the Marx Brothers were operating at the peak of their form, making original films that really had no counterpart then or now. All three are great, and Duck Soup is especially brilliant. They then switched studios and began the long decline that seems to hit every artist eventually. The first two films they made after the switch, A Night at the Opera and A Day at the Races, were still brilliant but the signs of MGM’s attempts to restrain the anarchy were beginning to peek through the seams. After that I haven’t seen any, but from what I’ve heard, they kind of just slowly go downhill.

Enough back story, why are they funny? First of all, their style could almost be seen as a combination of the silent comedies that preceded them, and the screwball comedies that were their contemporaries. They had pratfalls and sight gags, they had “wacky situations” and fast talking, but pervading the whole business was an atmosphere of total anarchism. The physical humor didn’t make a lot of sense (exactly why is Harpo always trying to get people to hold his leg in their hand?), the “plots” were almost nonexistent and the wordplay bordered on the surreal: “We must remember that art is art. Well, on the other hand water is water isn’t it? And east is east and west is west. And if you take cranberries and stew them like applesauce they taste much more like prunes than rhubarb does. Now uh…now you tell me what you know.”

Each brother had their own unique persona. Groucho was the fast-talking, cigar-smoking, eyebrow-raising wordsmith. Chico was a strange combination of Italian caricature and groan inducing “punsmith”. Zeppo was the straight man and Harpo was the mute anarchist among anarchists. A typical movie involved the brothers running around in a specific location spouting nonsense, jumping on tables and acting like crazed lunatics half the time with the occasional break for a harp solo (the effect of the feral maniac Harpo suddenly stopping everything to play a tender harp solo is its own kind of movie magic).

While Groucho might occasionally make an obvious joke, Chico might occasionally (ok, in his case “usually”) come up with a groan inducing pun and Harpo might occasionally remind the modern viewer a bit too much of Carrot-top (prop humor is not one of my favorites), the utter sincerity of their silliness and complete madcap brilliance of the vast majority of their movies more than makes up for it. Chico really is the only person that can get away with delivering a line like: “Groucho: Don’t you know what vessel is? Chico: Sure I can vessel…[starts whistling].” Harpo really is about the only person that can make me giggle by running around and honking a horn on the end of his cane. Groucho? Hell, who can resist such verbal gems as “I wouldn’t belong to any club that would have me as a member!”, “go, and never darken my towels again” or “I could dance with you until the cows come home. On second thought I’d rather dance with the cows until you come home.” As for Zeppo, he’s not all that funny, but there must have been some reason why German director R.W. Fassbinder put him at the top of his list of all time best actors right? (actually probably just Fassbinder being cute in that case) When it comes right down to it, the Marx Brothers really had something special.

There is also just something about some of those old films from the 30s and 40s. American cinema gets a bad rap sometimes, but I can think of few film experiences as viscerally breathtaking as watching the Marx Brothers, or Fred Astaire and Ginger Rogers “Dancing Cheek to Cheek” in Top Hat to name just one of many other examples. Maybe that’s why I didn’t like Brain Donors (or modern musicals for that matter)…they just don’t make em like they used to. The Marx Brothers can be imitated but never equaled. The Marx Brothers at their best showed just what a group of creative individuals was capable of when left entirely to their own devices.

So as Groucho would say: “Those are my principles, and if you don’t like them…I have others.”