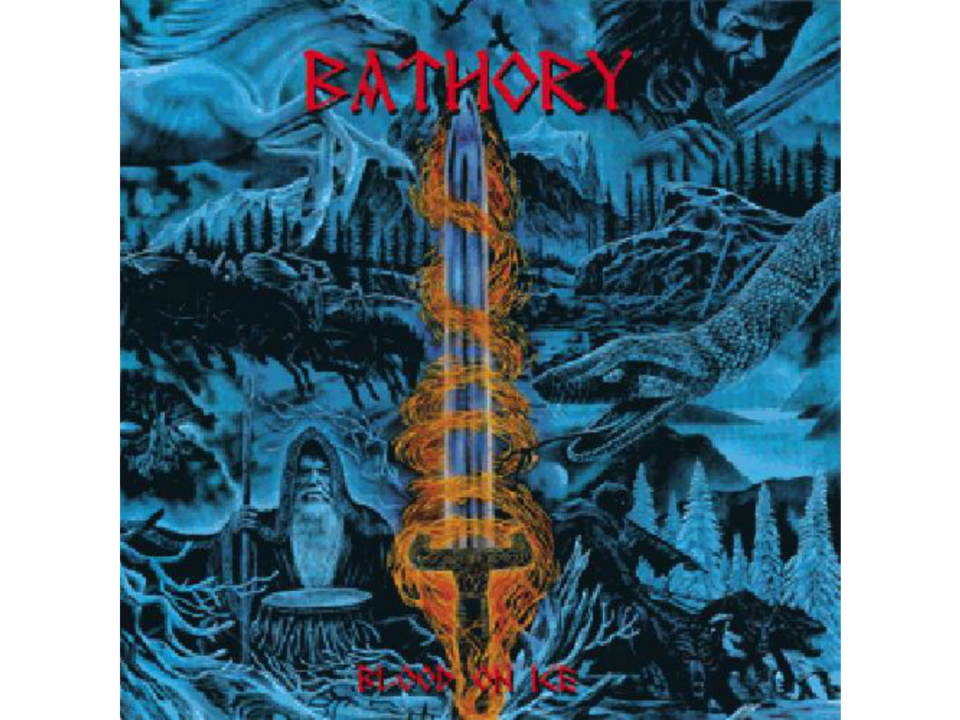 Bathory was always in the advance guard of the metal underground.  Their 1984 self titled album was years ahead of its time and was probably the single greatest influence on the sound of modern “second wave” black metal.  Then, with 1990’s Hammerheart (as well as most of 1988’s Blood, Fire, Death) Bathory created the quintessential “Viking Metal” album.  However, I’m not looking at Hammerheart today, I’m looking at an even better album, 1996’s Blood on Ice.

Blood on Ice was actually recorded in 1989 and then shelved because Bathory frontman Quorthon worried it was too much of a departure from Bathory’s usual black metal sound.  In 1996 he finished mastering the album and recorded the vocals, creating what, in my opinion, might just be Bathory’s best album.

From the opening title track, Blood on Ice tells you exactly what it is–midpace heavy metal with epic backing choirs and a frontman who still can’t quite sing:

Don’t let that make you think the album isn’t varied, there are actually quite a range of musical styles.  From the Manowar worship (let’s not forget they beat Bathory to the punch with the whole viking metal thing) of “The Sword”:

To the rather punky “One Eyed Old Man”:

And don’t forget to add in plenty of acoustic songs and intros like this clip from “Man of Iron”:

Of course, what Bathory does best on this album is play the most epic viking metal of all time.

Songs like “The Woodwoman” really are pretty fucking epic:

While songs like “The Lake” are even more fucking epic-er:

And the album highlight “Gods of Thunder of Wind and of Rain” is the most fucking epic of all.  From the intro:

It just never lets up.

Blood on Ice is also a concept album, each song tells a part of an unfolding story.  Here’s the stolen summary from wikipedia:

The anonymous central character, aged ten when the tale begins, is the sole survivor of a raid made by twenty black-clad horsemen bearing the banner of the ‘twin-headed Beast’ against his village. All the men are slain, and the women and children carried off to the far North, whilst the central character survives by hiding in a tree. He spends fifteen years alone in the wilderness, where he grows strong and learns the ways of the forest, the memories of the atrocities he has witnessed galvanising him. Then, one day, he meets a one-eyed old man (most probably Odin, although the tale always refers to him merely as ‘One-Eyed Old Man’) who tells him that he has foreseen his coming for a thousand years, and that he has been chosen as a champion of the Gods to fight their battle in the shadows beyond his world. To this end he will be granted a number of mighty artifacts and abilities, and be trained for a hundred days and nights by the old man. The first of these artifacts is a mighty sword (probably Tyrfing), forged in the dawn of the world, and the second given in a song is a mighty, eight-legged stallion ridden by ‘his father’s God’ (Sleipnir, Odin’s steed). He will also be guided by two ravens (Hugin and Munin) and he is granted with a number of supernatural powers: first, the woodwoman, a witch, takes his heart, for which price he can withstand any cut or slit. Then he travels to the bottomless lake in which all the knowledge of the worlds, old and new, is stored. The old man cast his left eye into the lake in order to give him his powers of wisdom and foresight (making the lake roughly analogous to Mimir’s well), and the central character casts both his eyes into the lake, which not only means he gains all its powers of knowledge and vision, but also that he will not have to stare down the Beast during his final battle. He rides North, guided by the ravens and by the ancient Gods, to confront his destiny. He charges down the gates of Hel and defeats the Beast in combat, as well as freeing the souls of those that had been held captive here, riding with them to Valhalla.

Pretty badass right?  Though, if you really want to know if you will enjoy this album, check out this two minute cheesy as hell story that Quorthon puts right in the middle of the song “One Eyed Old Man”:

If you actually listened to that all the way through then run, don’t walk, to your nearest illegal download site and get yourself a copy of this album!

That cheesy story in the middle of “One Eyed Old Man” would be so much cooler if it were in Swedish, i.e. if I couldn’t understand how lame it is.