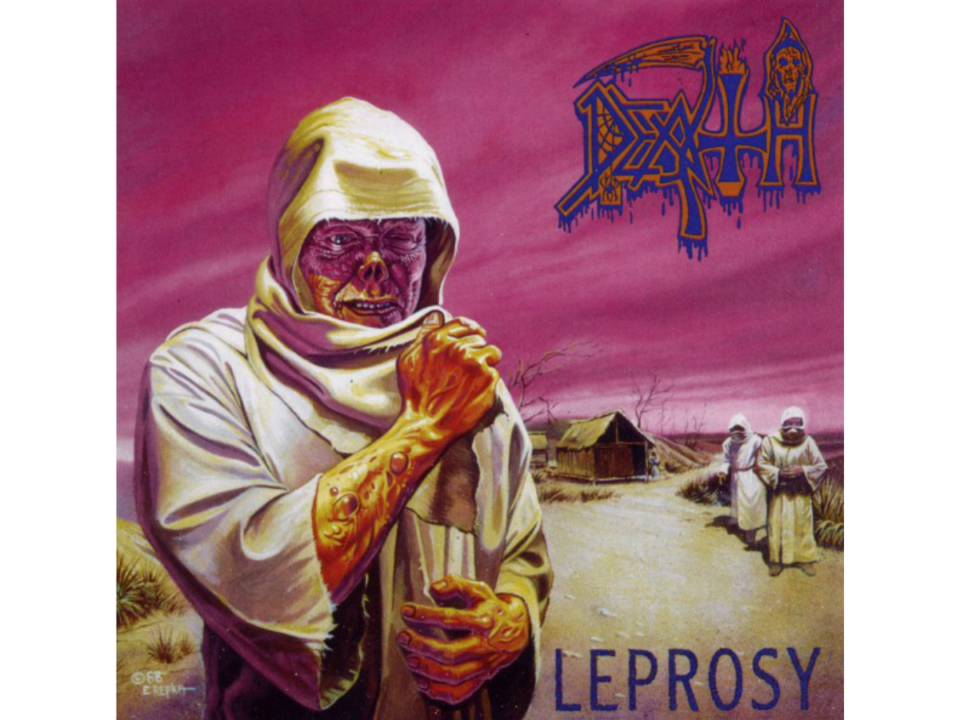 I’ve been going around for a while saying that I’m really not all that into death metal anymore.  And, I don’t know, maybe some of that is me preferring melody in a largely atonal genre, and maybe some of that is just me trying to troll my more death metal focused friends, but one thing I can’t deny is that the true classics of the genre are the classics for a reason, and today’s album is one of those classics.

Death (along with countless other bands I suppose it is only fair to mention) was one of the earliest and most influential death metal bands.  Depending on who you ask, Death’s 1987 debut Scream Bloody Gore was the first true death metal album in a mid-late 80s sea of blackened thrash.  And while Scream Bloody Gore displayed little of the technical prowess that came to define (and, eventually, ruin) Death in the coming years, it was an undeniably great little slab of raw simplistic death metal.  However, the following years Leprosy managed to up the technicality (and production) while still retaining the raw visceral appeal of the debut and might just be my favorite Death album.

The opening track, “Leprosy,” is full of cool riffs with just the right amount of technicality that transition excellently from one to the other (even making room for some interestingly soloing from Chuck:

This is one thing that I love about Leprosy, it’s full of awesome riffs that never cross too far into the prog-influenced wank-fests of the later albums. Here’s another great riff from “Left to Die”:

The brainchild of vocalist/guitarist Chuck Schuldinger, Death was always destined to be a guitar player’s band, and you can tell in the riffs.  I always liked this cool little tapped part from “Born Dead” that transitions into an excellent chugging riff just in case you worried that Death couldn’t RIFF:

Sadly, the album is not without a few minor complaints.  First, as great as Chuck’s solos are, backing guitarist Rick Rozz (of Massacre fame), isn’t quite up to the same level.  I actually like his solos fine, but when he trades off with Chuck’s more thoughtful solos (as in this clip from “Forgotten Past”), the derivative whammy bar heavy Kerry King worship becomes all to clear:

A bigger issue is the drumming of Bill Andrews.  He’s technically competent, but someone decided it would be a good idea to record his snare at 11, which only highlights the fact that all he seems to be able to do is monotonously hit it on the beat in the fast sections as in this clip, also from “Forgotten Past”:

Still, you really can’t let those kind of nitpicking complaints turn you off this album.  Leprosy is a collection of great riffs and excellent songwriting from beginning to end.  It’s the kind of death metal that you will remember, not forget seconds after the song finishes.  For a genre that can at times seem a little formless and lost in the rush to make the most brutally fast music possible, songs like “Pull the Plug” are a breath of well written and immensely catchy fresh air:

Death metal isn’t usually something you feel like singing along with, but who can resist spitting out “Why don’t you PULL THE PLUG” right along with Chuck’s dangerously close to cookie monster vocals?