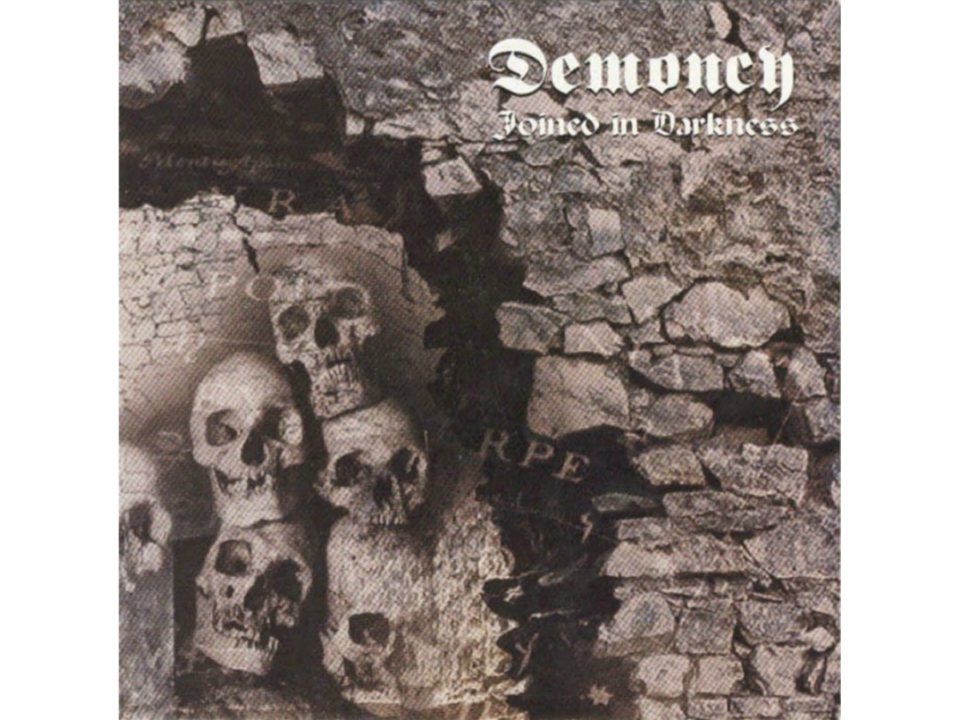 I usually try to alternate between black metal, death metal and thrash each month on MMMM–so why am I doing a “black metal” band on a death metal month?  Aside from my oft repeated (and mostly facetious) claim that I’m not all that into death metal, I’m not so sure that Demoncy really is a black metal band.  Though they were undeniably influential on the current minimal and depressive state of the American black metal underground, I’ve always thought Demoncy was more death metal than black metal.  However, one thing no one will deny is that their 1999 album Joined in Darkness is easily one of the most evil sounding albums of all time.

I don’t want to spend this entire post discussing whether or not this album is black metal or not.  To me it sounds more like Profanatica (sole member Ixithra’s previous band)(or even Incantation, which I would assume Ixithra had something to do with at some point) than Darkthrone.  Of course, Profanatica is also one of those bands that walks the fine line between death and black metal.   Interestingly, sections (especially the second half) of this clip from “Impure Blessings (Dark Angel of the Four Wings)” could easily be a black metal riff were it not for the driving, double bass focused drum attack, and the lower register of the guitars:

Even the vocals aren’t much help in generically identifying Demoncy. The vocals (along with the production, another huge part of the evil atmosphere of this album) are kind of a gross between a black metal scream and a death metal growl (though, if I had to pick one, I’d put them more on the black metal side of the tracks).  Ixithra sounds like a evil lizard that has smoked a pack of Hell cigarettes a day for the last 666 years.  Just check out this clip from “Hidden Path to the Forest Beyond”:

While few dispute the fact that the production on Joined in Darkness is about as close to perfection as an album that is trying to be “the most evil album of all time” can get, many have complained that the album is rather one note.  And it is true, Demoncy definitely has a formula for their songs.  Demoncy was all about the transition (via drumless sections) from slow trudging parts into thunderous uptempo riffs as you can see in this example from the title track:

And while that pattern is repeated throughout the album, Joined in Darkness is not quite as one note as all that.  For instance, this clip from “Impure Blessings (Dark Angel of the Four Wings)” kind of turns the slow/fast alternation into a perverted doom influenced cover of a Pantera song:

And really, that is one of the few bits of “syncopated” metal that I much care for.

Much like Ildjarn’s Forest Poetry, it is a fairly calamitous occasion when a song opens with a minor bit of variation like this clip from “Spawn of the Ancient Summoning”:

In this case, the “variation” is that the tremolo picking here is a bit higher, though I still get a slight death metal feel from the proceedings.

The higher register stuff continues for the thunderous uptempo section of the same song:

A few tracks later on the closing track “The Dawn of Eternal Damnation,” the guitars again break from the low register sludge, shocking the listener after 30 minutes of rumbling evilness  by playing above middle C:

The same song ends the album with one final doom laden dirge of a riff:

Which itself seems vastly different from the other slow sections of the album.

However, these minor variations are not the reason to listen to this album.  For instance, while “(Angel of Dark Shadows) Goddess of the Dark” opens with keyboards, it is otherwise not much different from the rest of the album.  However, it makes an excellent lesson in just how brilliantly evil Joined in Darkness really is.

The keyboard line of an alternating discordant intervals descends into darkness before fading into a mirrored guitar line that slowly ascends.  However, while the descending keyboard line accented the low note of the interval, the ascending guitar line accents the upper note:

Of course, due to the close juxtaposition of the discordant intervals, the ascending guitar line that rises from the darkness of the intro doesn’t sound triumphant, but rather it sounds as if it is bringing the darkness with it.

The riff continues to ascend:

And ascend even further:

The whole way up, the combination of sick vocals, perfect production and the dissonance of the chord progressions creates an almost unbearable aura of evil.

As one last example of Demoncy’s evilness, Check out this opening riff to the brilliant “Winter Bliss.”  Due to me having to finish a paper for a class tomorrow I can’t really stop and figure out this song on my guitar, but that is one damn evil note that this riff ends on (right when the drums kick in):

I’d wager my left nut that note is minor, diminished or both together (er, as I assume it’s the tonic, I mean in relation to the two previous notes).

This certainly is among the most evil-sounding albums ever. I haven’t listened to it enough to decide whether it’s as same-y as it seems at first, but the aesthetic alone is enough to make it pretty awesome.

By the way, I have this classified as black metal in my collection, simply because it obviously has the spirit of black metal, which I think is the most important factor. I guess black metal is like pornography; it’s not always easy to define, but I know it when I see it.