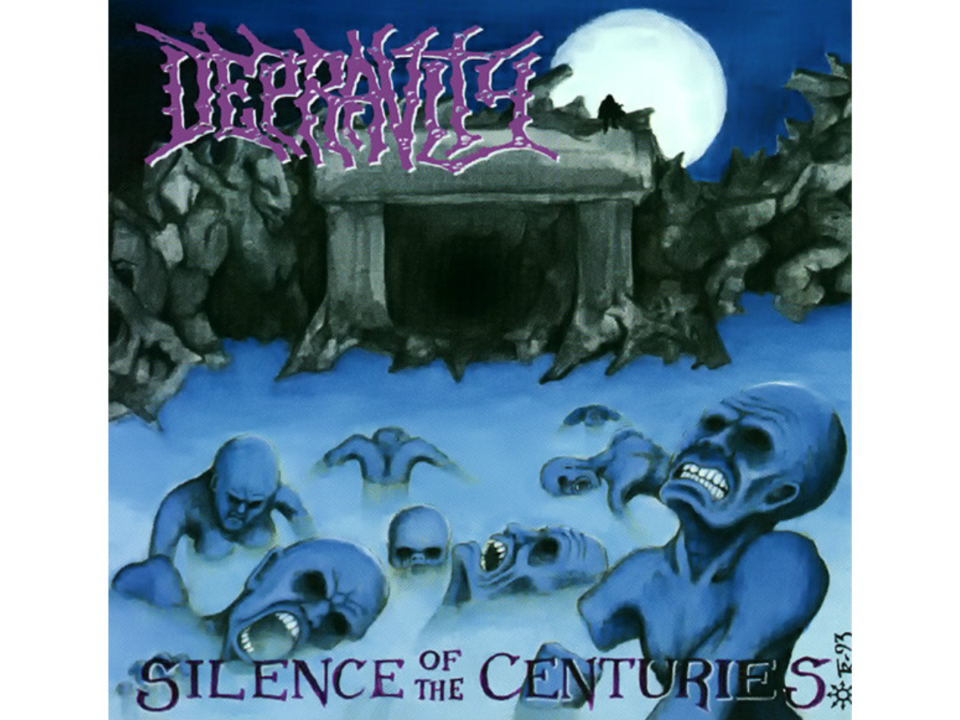 I’ve been going around lately saying that about the only death metal I listen to any more is Incantation and the legion of bands they influenced with their focus on dark, evil, atmosphere over, like, actual songwriting.  Well, that’s not entirely true, I guess I also still appreciate bands that mix old school aesthetics with a sinister dreamlike atmosphere–and then top things off with a large helping of blackened riffs.  Unfortunately, unlike Incantation, such a mix isn’t exactly a common thing, but Finland’s Depravity really makes you wish it were on their 1993 EP Silence of the Centuries.

From the first notes of the title track, it’s pretty obvious this isn’t death metal from America:

Finland has a sound for sure (albeit a sound that is rather similar to the sound of their Swedish neighbors), but there is a melancholy, laid back, almost dreamlike quality to the riffs on Silence of the Centuries that really sets this album apart.

Songs like “Vacuum of Thoughts” really milk every last ounce of creepiness out of the kind of eerie, dissonant, tremolo picked riffs that are everywhere on this album:

Most of this album chugs along at a medium pace, alternating tremolo picking with a nice chugging Finnish groove.  Check out “Phantasmagoria” where some interesting drum work sets up the groove quite nicely:

As a black metal fan, I don’t normally go wild for soloing, but the solos on Silence of the Centuries are excellent!  They are all great, but I especially love this one from the cutely named “Sleepy Ocean”:

Ok, sure, I’m a sucker for tapping, but guitar pyrotechnics aside, that was really a tastefully done, excellently incorporated solo, neither of which are all that common in death metal.

Of course, it is possible that what I really like about this album is its blackened feel.  Maybe it’s the atmosphere, maybe it’s the abundance of tremolo picking, but this entire EP is just one Castle Ravenloft D&D campaign away from straight up black metal.  Just check out “Sleepy Ocean” again if you don’t believe me:

Sure, that’s obviously death metal, but if ever a death metal band could get away with wearing corpse paint, it would be Depravity.  Also Incantation.

This is probably the best MMMM since Bergtatt. Very unique, very European, and very atmospheric. Awesome!