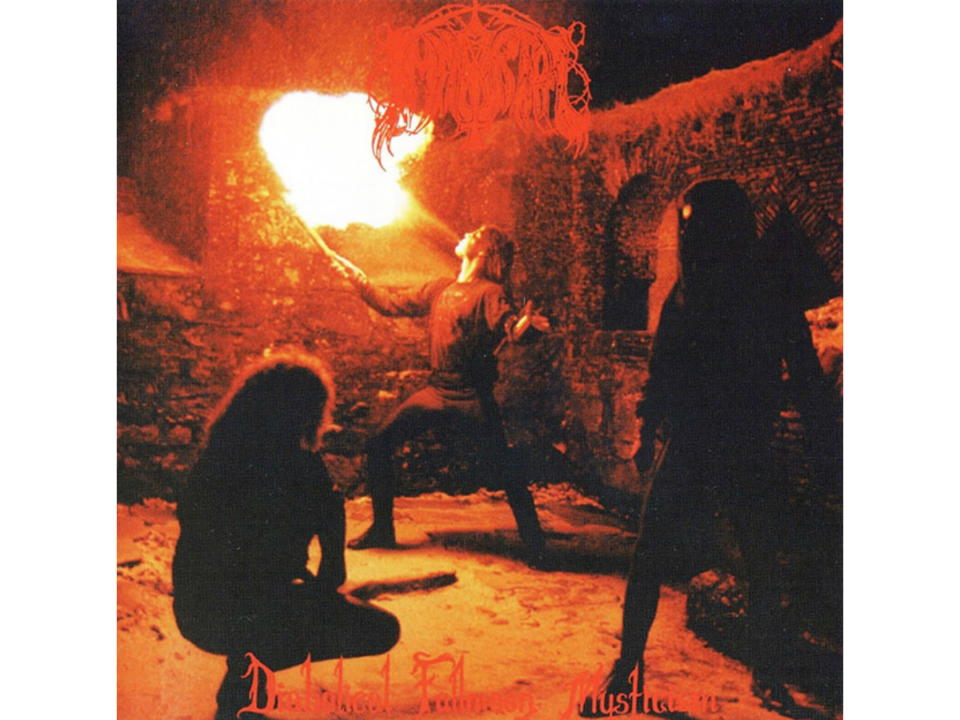 I’ll admit, Pure Holocaust is my all time favorite Immortal album, but goddamned if I’m not blown away every time I bust out their debut for a listen too!  And, because it doesn’t get near the amount of press that their more famous sophomore album does I figured I’d go ahead and feature it today!

Diabolical Fullmoon Mysticism is kind of like the Reign in Blood of black metal.  That is, if Reign in Blood had been recorded in a wind tunnel and consisted of 6 variations on the same song.  Still, at just over 30 minutes, Diabolical Fullmoon Mysticism manages to pack quite a classic black metal punch without ever overstaying its welcome.  After an appropriately frostbitten intro of wind and acoustic guitars things start off with a bang with the fast and furious “Call of the Wintermoon”:

Unlike a lot of early black metal (Gorgoroth excepted), Immortal is actually kind of metal.  When the double bass comes in I even almost feel like headbanging right along with good old Armagedda’s struggling feet.

The vocals are about as classic black metal as they get:  completely shredded and all around ear piercingly ugly.  You can even play a fun drinking game with the album, everyone has to take a drink every time Abbath Doom Occulta says “wow”:

Ok, I’m pretty sure that one is a “finish your drink” situation.

There is a lot of mid-paced work on the album like this clip from “Unholy Forces of Evil”:

(drink!) Riffs like that really have a driving catchiness to them that keeps the listener headbanging right along with them.

Diabolical Fullmoon Mysticism was from a simpler time, a time when Immortal really were the first ones making music like the following clip from “Blacker than Darkness,” and I really think their originality shines through the legion of imitators that came in their wake:

Part of the charm of the album is the undeniably epic atmosphere.  Acoustic guitar interludes are sprinkled throughout the album like this clip from “Cryptic Winterstorms”:

Don’t forget, like I always say on MMMM, “acoustic guitar sounds buried in the mix” is one of the hallmarks of great black metal!

However, unlike most other great black metal, Immortal wasn’t afraid of busting out a solo or few, like this clip from the same song:

Finally, the album ends with the nine minute epic “A Perfect Vision of the Rising Northland.”  It is here that the blueprint for all black metal to come is complete with the addition of the final two pieces of the black metal puzzle: “inaudible spoken words buried in the mix” along with “epic keyboards”:

Did I say the puzzle was complete?  Well, I can’t let you go without mentioning Immortal’s contribution to the art of black metal lyric writing!  Diabolical Fullmoon Mysticism’s lyrics (as the album title suggests) are that adorable mix of Satan, broken English and D&D.  Of course, there is an old joke in metal circles that goes “The eskimos have 23 words for snow. Immortal have 24.”  Thus, Immortal’s lyrics also always made sure to add a frosty slant to their paeans to the Goatthrone of Desire™:

A perfect vision of the rising Northland

This is one of my favorite things about black metal.  That the kind of dorks that would write lyrics like that actually take them seriously.  I mean, after all, the guys who made the following “most brutal music video ever” must have been serious right?:

I hadn’t listened to this album in a while, so I wanted to revisit it before I commented. I remember it being perfectly listenable yet unexceptional, and after listening to it, like, four times this afternoon, I still pretty much feel the same way.

It starts pretty strong with “The Call of the Wintermoon”, which has some pretty choice chord changes, especially toward the beginning of the song. It sort of falls into tedium by the time the song ends, though.

The highlight of “Unholy Forces of Evil” is that first breakdown where Abbath is all, “Enter the centers of darkness / Where all evil dwells”. I also like the chord progression after the chorus, right after the other instruments cut out and Abbath sounds like he says “It’s delicious demons / Rising I shall”, which of course makes perfect sense.

“Cryptic Winterstorms” is overall probably the strongest song on the album. I think there are some more interesting individual parts in the previous two songs, but “Cryptic Winterstorms” maintains a higher level of songwriting throughout. It never drags or becomes tedious, and all of the various sections seem to have a coherent musical theme and actually contribute to the song.

“Cold Winds of Funeral Dust” is fucking boring. And really, this is where the album always seems to lose my interest. I could pretty much do without “Blacker than Darkness” as well, even though there’s nothing really wrong with it. And “A Perfect Vision of the Rising Northland” proves that Immortal have no business trying to sustain a song for nine minutes.

That video, though, is a classic. Can you imagine three grown men being any more (or more frequently) flabbergasted by, from what I can ascertain, is simply the mid-afternoon sky?

I don’t know, every time I’ve gone back to it I’ve always come away thinking it was pretty great, and I’ve had the album for almost 15 years now (which either means it held up well, or is influenced by nostalgia being one of my first black metal albums).

Still, I give you one point, I really don’t think I’d want to listen to “A Perfect Vision of the Rising Northland” four times in a row either 😉

Well, at least we can agree that Pure Holocaust is Immortal’s best. That album is cash money from front to back.

Oh, and thanks for pointing out the whole “wow” thing. Pretty damn hilarious. I somehow never noticed it before, but I can guarantee I’ll never not notice it again!

That video was supposed to be an inside joke thing, as far as I know. Their first video is for “Unsilent Storms in the North Abyss” : http://www.youtube.com/watch?v=Zqzex7OAUoQ

Cheers! I enjoy these MMMMs

Yeah, I’d buy that, it would take a special kind of grimness to not be aware of the silliness of that video…