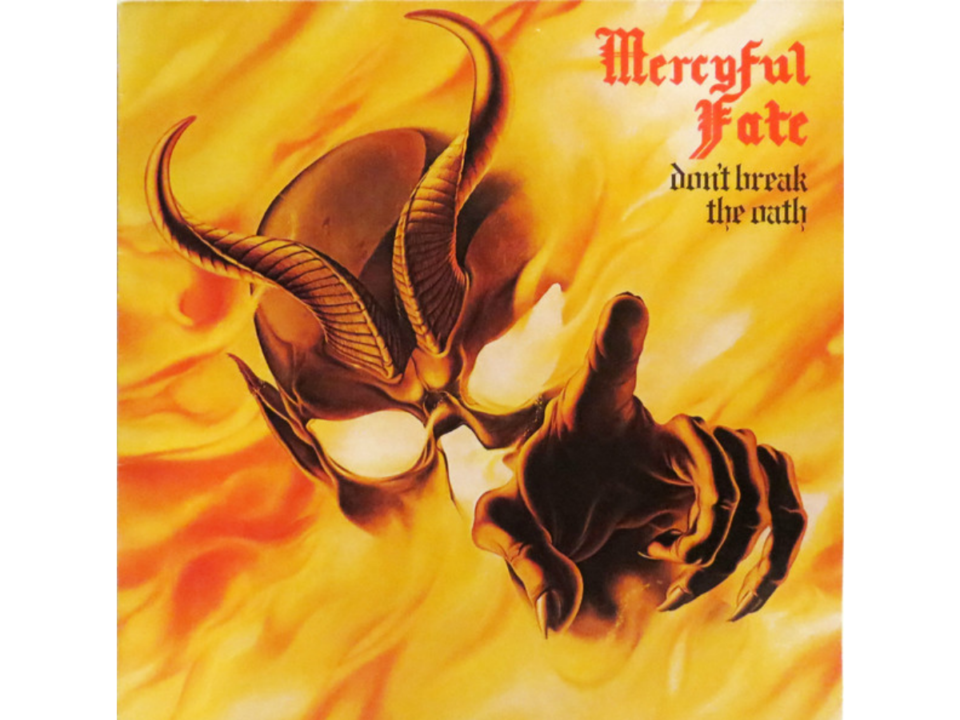 I mean, you have to get past the vocals of course.  And no, this time the vocalist doesn’t sound like Donald Duck or The Cookie Monster, but rather like some dude that got kicked in the nards.  Opinions differ on whether he is a genius or just annoying.  I’m probably somewhere in the middle on the issue, but the dude does have some nice range.  His vocals range from a low growl:

…to his normal singing voice:

…to a high falsetto:

Anyway, regardless of how you feel about King Diamond’s vocals, Mercyful Fate really was one hell of a band.  They weren’t quite thrash, more some kind of speed metal/power metal hybrid.  And many of their songs were fucking epic like this clip from “The Oath”:

Granted, there were often more traditional heavy metal elements like this clip from “Welcome Princess of Hell”:

But, thankfully, they always quickly passed into more epic and minor key passages.

And, despite me poo pooing any claims of black metal (or even thrash) influence, Mercyful Fate really was pretty damn heavy for 1984.  I believe I even detect a bit of double bass in this clip from “Come to the Sabbath”:

Of course, they were never trying to be the most brutal band ever.  They were really a lot closer to Iron Maiden than Slayer:

There is a lot of nice technical guitar work on the album.  The solos are especially well integrated into the song like this bit from “Desecration of Souls”:

In fact, some of the sections almost border on prog!:

Right? Anyone?  Ok, maybe not, but still, Don’t Break the Oath is a pretty fantastic album, full of varied and creative old school metal.  Mercyful Fate, showing up just slightly ahead of the major thrash band’s foundational albums, was undoubtedly influential.  Even today, the Mercyful Fate influence can be heard in all kinds of bands (like my friend Jon’s band Bröhammer).  Hell, their opening riff to “Desecration of Souls” is probably second only to Black Sabbath’s “Black Sabbath”, for most played riff ever back when I was actually still playing my electric guitar.  Just check it out (preferably played with an “oh yeah, that is so metal” face):

I can barely express how much I love this album, Mercyful Fate, and King Diamond. Interesting tidbit from this album’s page on Encyclopaedia Metallum:

The actual name of the song, “Welcome Princess of Hell,” was supposed to be “Welcome Princes Of Hell.” It was a title misprint, where the lyrics were correctly written in the original pressing but the title wasn’t.

Haha, that’s awesome about the “Princess” of Hell thing!

And I was just thinking, a lot of parts of the song “The Oath” remind me of that song (“A Mansion in Darkness”) that I love so much from Abigail. Not the same, but it’s got the same epic relentless intensity to it. I’ll have to see if I can learn to find the rest of Abigail equally awesome.

Yeah, I can definitely see the similarities between “The Oath” and “A Mansion in Darkness.” They both have an uptempo, driving sort of gallop to them.

That’s a good way to put it. Maybe that’s why I like Bolt Thrower more than I should too…