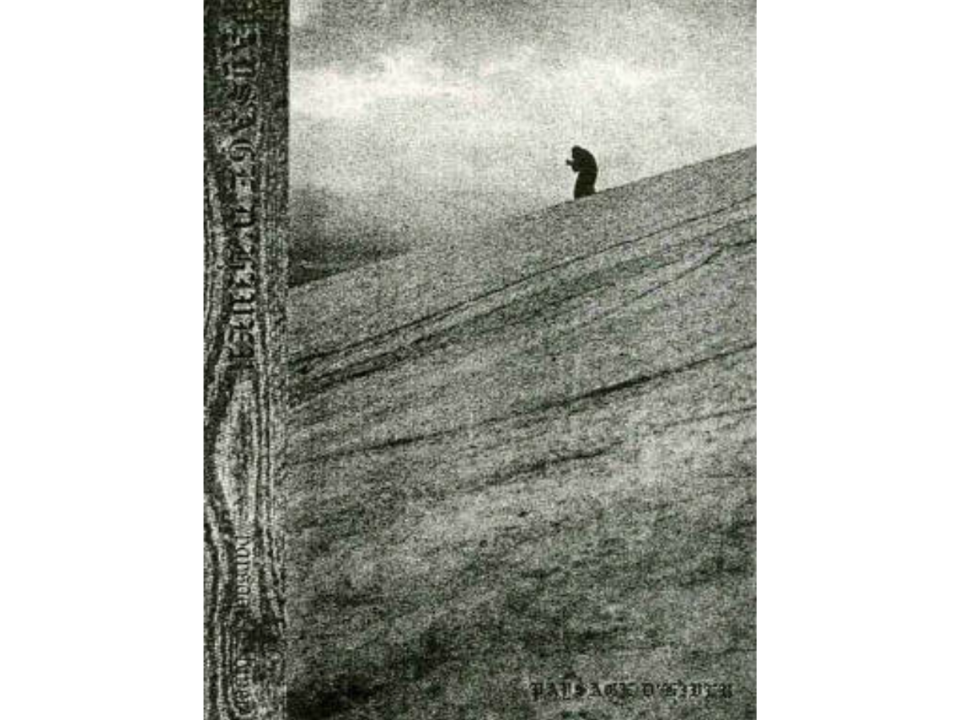 Black metal is not a genre of music known for its crystal clear productions.  So it is rather impressive that the productions on your average Paysage D’Hiver albums are so bad that many black metal fans find their music unlistenable.  Today’s album, their three song, 55 minute 1999 self titled demo might just be their best album (though all their work is very strong).  I’ll do my best to explain why.

I suppose I really shouldn’t talk about “their” work, since Paysage D’Hiver (French for “winter landscape”) is a one man band.  The brainchild of a man (frost demon?) known only as Wintherr (ok, fine, Tobias Möckl), it is tempting to call Paysage D’Hiver an ambient band.  Their songs are typically in the 15 to 20 minute range and are often built upon only couple notes.  Here’s an example from the second track on today’s album, the 17 minute “Gefrorener Atem” (“Frozen Breath”):

The two notes of the keyboard intro are doubled by the guitars (the noisy part is the guitars if you couldn’t tell) and then that single 2 note riff is repeated for the next 10 minutes before an ambient passage leads to a slight variation on the riff:

The primary way Paysage D’Hiver is able to maintain interest on this album is (in addition to subtle variations on the riffs themselves) by overlaying new lines over the main riffs.  Here is a section from earlier in the same song where a second guitar part fades in, barely audible above the noise of the production:

The 19 minute opening song “Welt aus Eis” (“World of Ice”) uses violin in same way.  Here, you can hear a violin (charmingly played at the limit of Wintherr’s meager ability) overlaid over the primary 2 note riff (that changes mid clip into a 3 note riff):

I’ve harped on this before, but a large part of the reason for black metal’s relentlessly “necro” production aesthetic (along with the “tremolo picking” style of guitar playing) is to give the illusion of complexity while only using the most minimal of structural elements.  For instance, also in the opening song, this arpeggioed riff fades into a brief acoustic section that plays the same notes:

While the acoustic section is a marvel of pure wintery atmosphere, much of the pseudo complexity is lost when the layers of white noise and aural obfuscation are stripped away.

Unlike similarly necro bands like Ildjarn, Paysage D’Hiver varies up the tonality of the 3 songs on the album.  After playing the same riff for 8 minutes on the final 16 minute track “Der Weg” (“The Way”–even the song titles are minimal) a shocking tonal shift is introduced by the addition of a mix dominant keyboard line that holds for the next 3 minutes:

And, when the final 5 minutes of the song sound like the same song heard from a great distance I still find myself compelled to listen rather than “skip the outro”:

Just as one could barely make out the notes played in the songs on this album, for the outro the problem has been compounded by the volume being halved (pro tip: the volume level for all Paysage D’Hiver albums should be set to half a notch below the pain level).  And yet the same atmosphere of supreme melancholy somehow manages to break through, perhaps even amplified by the suggestion of what has been lost.

I realize much of what I’ve discussed is once again merely a recap of the basic principles of minimalism, and that what Paysage D’Hiver are doing on their albums is perhaps rather obvious.  And yet I can’t think of a black metal discovery in recent times (of which I’ve had many) that has impressed me nearly as much as Paysage D’Hiver.  Black metal is the ultimate expression of sorrow, suffering and melancholically cold black hatred in music.  And, by that definition, Paysage D’Hiver is the pure essence of black metal.

I’m with you all the way on this one, good buddy.

The audio quality of this group is remarkable on my speakers. . .

Dude, you said: “What’s a black metal band I can test my new speakers with?” You brought that on yourself.

Testing speakers with black metal will inevitably be disappointing. Some well-produced metal that doesn’t suck (off the top of my head):

I’ll post more after I get home and take a look at my stash.

All right, here are some more:

I see no Rammstein! 😐

Also, there are a few qualifiers in the above that exclude Rammstein…see if you can find them!

And yet I see you included Youthanasia…you still claiming that doesn’t suck? (I suppose, to be fair, I couldn’t name a song off of it so maybe I’m not familiar enough to pass judgement).

Damnit! I knew someone was going to call me out on Youthanasia. I’m not saying you’d like it, but I was listening to it on the way home from work tonight and I quite enjoyed it.

Look, fuckers, I was just trying to help Danny get some metal that doesn’t sound like a compressed dog turd. Like my mom always says, “no good deed goes unpunished!”

Hehehe…hell, while we’re at it, Mastodon is a band I’ve never heard but am totally prepared to shit all over!

Paysage wasn’t so much testing Danny’s speakers as it was “nearly breaking” them. He had them up to 11 but all the decibels were coming out of his tweeters only.

Brian, thank you for the suggestions. In the meantime I was blasting ICP, P.O.D., Metallica and Limp Bizkit. I must say Youthanasia was a slight improvement. 😐

I hate both of you guys so much.