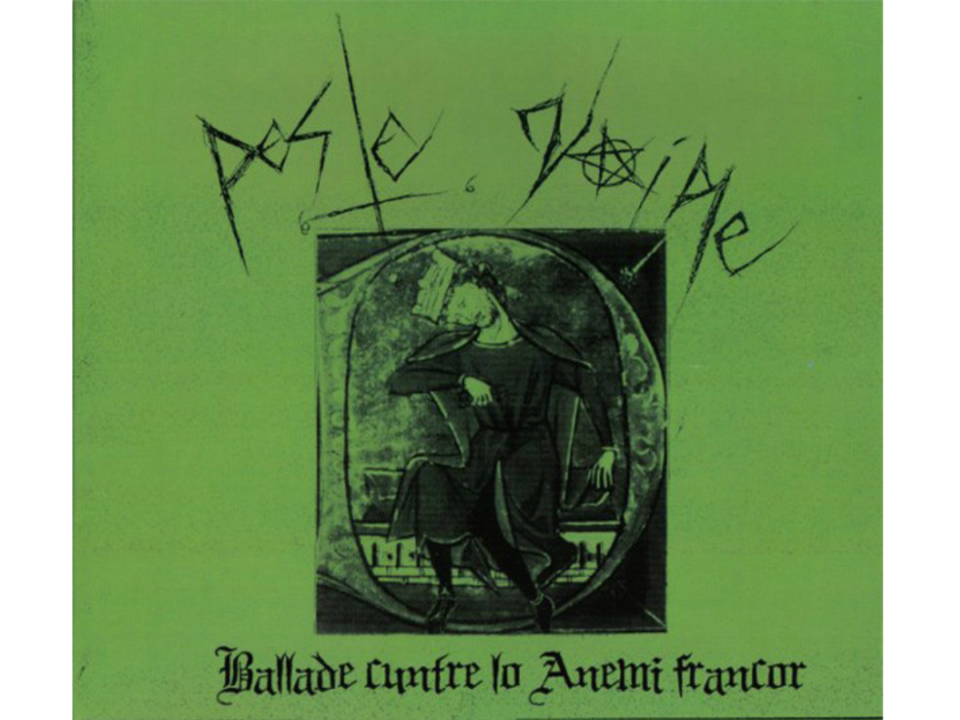 One thing I love about black metal is how it takes on different characteristics based on its country of origin.  While all black metal bands work with the same (narrow) set of influences, each black metal producing region has a distinct sound, and France is no exception. Not that there is any specific thing I can put my finger on about the French black metal sound, but today’s album is about as French as prancing around a countryside while eating cheese–or, as a Peste Noire would probably prefer it: slogging through a sewer chugging absinthe.

I’ve listened to a lot of Peste Noire since their self-titled release quickly became one of my favorite releases of last year, and I’ve come to the conclusion that pretty much all their output is quite brilliant.  I’m still a bit unsure about 2011’s tuba heavy L’Ordure à l’état Pur (The Pure Essence of Garbage), but Peste Noire’s resident frontman/songwriter/n̶a̶t̶i̶o̶n̶a̶l̶i̶s̶t̶ [racist] Famine has to be one of the most creative and brilliant voices currently working in black metal.

Peste Noire’s early career was more straight ahead black metal, though still of the highest quality.  And then, with their either amazingly (or sillily) titled 2007 album Folkfuck Follie, the songwriting took a nosedive into that special kind of shitty sounding black metal that only someone like me can pretend to love.  Today’s album, 2009’s Ballade Cuntre lo Anemi Francor (Ballad Against the Enemies of France) is the follow-up to Folkfuck Follie, and it takes the lo-fi punk/folk aesthetic to a new low of simplicity and aural sewage.  Obviously it was going to be the album I chose to write about.

There are only 5 “real” songs on the album, mixed with 5 shorter intros of acoustic and folk music.  The intros are fine if, like most black metal intros, of only passing interest compared to the songs themselves.  Still, the incorporation of traditional songs like “La France Bouge” (“France Stirs”) definitely helps generate a cohesive French nationalist atmosphere for the album:

The intros also probably work as well as they do thanks to Famine’s effortless ability to switch between pleasant sounding acoustic interludes and punk/black metal filth within the same song like this clip from the title track:

Don’t let that acoustic intro fool you, as you can hear in this clip from the album opener “La Mesniee Mordrissoire” (“The Killing Company”), this is one hell of a disgustingly filthy album:

Only Famine could work a solo, clean singing, disgusting yet very French vocals, and what can only be described as a record scratch into a song and still make it work.  And this is even his simplest album!

Despite the simplicity, there is plenty of variation.  From the Forgotten Woods sounding rock of “A la Mortaille!” (“To Death!”):

To the whatever kind of non-black rock music the very fun “Rance Black Metal de France” (“Rancid Black Metal of France”) is:

To the final midtempo and even rather epic “Soleils Couchants” (“Setting Suns”) that makes excellent use of the female vocalist that is heard throughout the album:

Ballade Cuntre lo Anemi Francor might not be Peste Noire’s best album (though picking just one would be a tall order anyway), but it is far from their worst (as many are quick to claim).  It represents a band that was not afraid to leave tight and complex black metal compositions behind for something far dirtier, and yet no less creative and musically worthwhile.