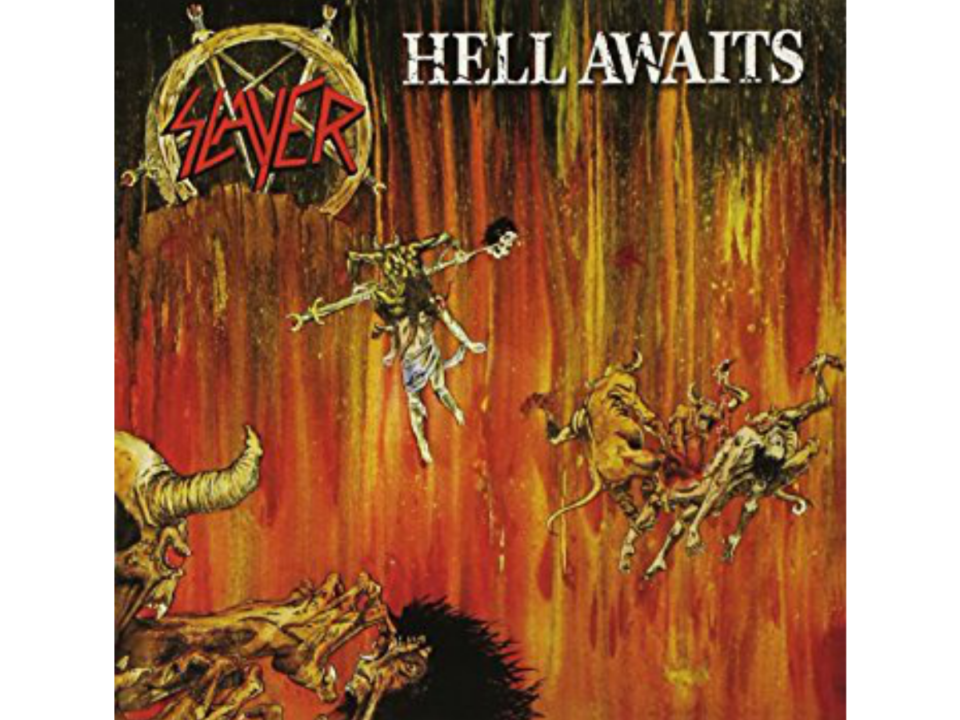 Welcome back to Mid-Month Metal Masterpiece, where I discuss a different classic Thrash, Death, Black or just plain “Heavy” metal album on the 15th of each month.  Of course, I’m an old school fellow, so don’t expect to see a lot of stuff post-1996 or so.  Each installment will be accompanied by several short sound clips illustrating important sections of the album.  Anyway, it was either this or a new Daily Metal Reviews section.  Consider yourselves lucky I chose the path of moderation.

I’ll be the first to admit that Hell Awaits is not a perfect album.  The thin production is a major debit and some of the songs probably could have been trimmed a bit.  But for sheer evil old school thrash awesomeness, Hell Awaits is unmatched.  The guitars sound like they are trying to burrow into your skin while the lyrical blasphemies fall just on the right side of ridiculously hilarious.  Reign in Blood might be Slayer’s best album, Show No Mercy and Haunting the Chapel are masterpieces in their own rights, but I’ve always had a blackened spot in my heart for Hell Awaits, flaws and all.

The title track opens with the most evil intro ever (until Deicide’s intro to Satan Spawn: The Caco Daemon seven years later) as demonic voices chant “Saay-awt…Saay-awt…Saay-uut” over moaning guitars that slowly grow in volume:

But look what happens when you play the intro backwards:

That’s right, the PMRC was on to something, there really are hidden messages in metal albums!

From the intro, the opening song moves on to two minutes of chugging instrumental awesomeness…

…before pulling out all the stops and quintupling the tempo while vocalist Tom Araya tries his damnedest to keep up:

In case you missed it, he said:

Yeah, yeah, grammar suffers when you only have so many syllables you can cram into half a second.  And I know a lot of people think the sound effects on the delivery of “Hell awaits” are kind of cheesy, but in a time before any kind of widespread use of the “monster voice”, I think Slayer really used those vocals pretty effectively.  Just check out this section from later in the same song:

You can hear the beginnings of Death Metal all over this album (and especially on their next album, Reign in Blood), and not just in the vocals.  With this album drummer Dave Lombardo began to make more prominent use of double bass as you can hear in this selection from “Praise of Death”:

Even the famous traded-off solos, while perhaps a bit masturbatory, foresaw the atonal soloing of bands like Morbid Angel (first Kerry King, then Jeff Hanneman).  Here’s just one of many of the album’s examples from “At Dawn they Sleep”:

Not that the whole album was nonstop full-speed riffing like Reign in Blood.  Check out the almost “Prog” (a word that I probably overuse and don’t fully understand…oh well, deal with it) sounding intro to the same song.  You can tell right away that Metallica wasn’t the only influence on Testament:

Slayer repeats some ideas on this album (and experiments with many more ideas that will be reused on Reign in Blood), but there is definitely a strong emphasis on experimentation and pushing the boundaries of what a thrash album should be as well.  Even a simple thing as opening my personal favorite track “Necrophiliac” in F (metal bands love their E string like bass players love their drummer) helps give the album a bit of extra variation.  Of course, “Necrophiliac” is also full of totally badass riffs–like the part where Araya sings “Down to the fiery pits of Hell”:

“Crypts of Eternity” is another stand out song for me with the almost “Heavy Metal” sounding chorus:

Not only are those lyrics pretty awesome, the music for that section is pretty fricking epic:

Ok, fine, maybe that is a little silly.  I still think it’s awesome though.

Master of Puppets, Peace Sells…But Who’s Buying and Slayer’s own Reign in Blood (all released in 1986) might have been high points of American Thrash, but I’ve always felt that Hell Awaits stands just fine on its own.  Oh, and how about that album cover?  A lot better than a bunch of sissy-ass cross shaped gravestones!

I should probably be ashamed of the fact that, although I’ve had this album for years, I’ve never really given it much of a chance. For whatever reason, the only two Slayer albums I’ve ever spent a whole lot of time with are Reign in Blood and Seasons in the Abyss. And even though this pick isn’t from way out in left field or anything, props for not going with something too fucking obvious (like the aforementioned Reign in Blood).

I don’t know what it is with me and thrash metal. Like, I have no problem constantly digging around for old black and death metal that I’ve missed over the years, but with very few exceptions, the only thrash I have much interest in is the stuff I was into growing up (which, admittedly, was a pretty small sample of the genre).

Haunting the Chapel is even arguably better than Hell Awaits…and I actually really like Show No Mercy too. Slayer was great thrash, but it was that dark, evil edge that they had that really makes their albums stand out to me. As the years go on I come back to all of Slayer’s early catalog more and more, while I revisit old Metallica and Megadeth a lot less. Slayer isn’t necessarily better, but they are, for lack of a better word, a lot more charming 😉

Oh, and I’m sure I’ll probably still do Reign in Blood one of these days if I keep this up long enough…

I guess that works for “Hell awaits” too.

I had this on cassette and production-wise it sounded shittier than all the other Slayer albums so I didn’t listen to it much. I’m told its been remastered and sounds alot better today. Since I played this one alot less than Reign in Blood or Seasons or even Show No Mercy, the only song I really remember is “Hell Awaits”. Still, I’ve never heard a Slayer album that I thought was truly bad. Certain albums and songs just stick with you more than others which is why Reign in Blood and Seasons (WAR ENSEMBLE!) will always be my two Slayer favorites. When I saw Slayer on the Clash of the Titans tour everybody was throwing pennies at Alice in Chains and shouting, “SLAYER” the whole time.

That’s funny that you mention the Clash of the Titans tour. Hey Isley, remember years ago when my older brother was telling us about that tour and said basically the exact same thing, that throughout Alice in Chains, the crowd was screaming “Slayer, Slayer, Slayer” in rapid succession? Are you my fucking older brother, Colonel Klink? Haha!

Yeah, the production really kills Hell Awaits (obviously not enough to ruin it for me though). Klink, you should check out the Haunting the Chapel EP if you haven’t heard it…it’s pretty awesome and the same era.

Hah, I do remember that Brian. I also remember him saying that Kerry King was born on the day of Musical Conception whatever the fuck that means…

Anyway, I know Colonel Klink and I don’t think he’s ever gone by the name “Banjo”, so probably not your brother (speaking of, has he reverted to his Christian name yet?)

Isley, you must bear in mind that a good 82-87% of what my brother says is complete gibberish. And yes, he will, until the day he dies, go by “Banjo.” Shit, even I call him Banjo at this point.

Heh, no I’m not your older brother. Thats funny and doesn’t surprise me about Alice in Chains. It probably happened in every city the tour played. There were also a few random shouts for Slayer during Anthrax and Megadeth. As far as Haunting the Chapel, I used to own the tape but haven’t heard it in years. I don’t remember much about it. Show No Mercy was cool though, and a far better debut than Kill ‘Em All.