Mid-month Metal Masterpiece 35: Sodom – In the Sign of Evil 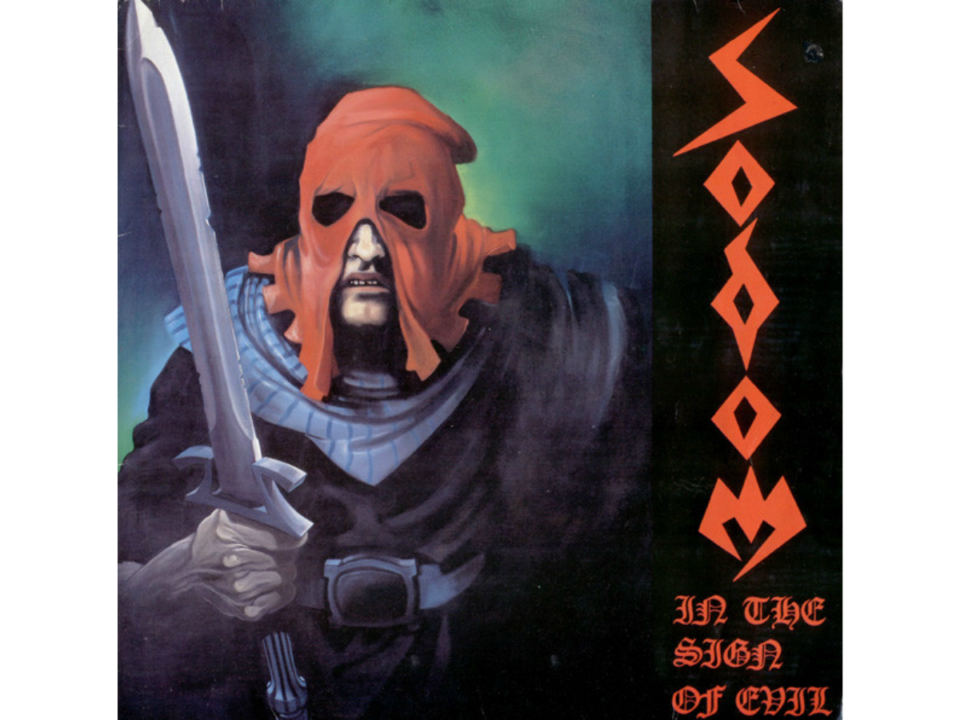 Sodom, even more so than Kreator (covered here a few months ago), was probably the most brutal of the early German thrash bands.  Their music always towed the line between thrash and death metal (especially on their later albums which embraced death metal more whole heartedly), but the album I’d like to talk about today is, in my humble opinion, more black metal than anything else.  Which was an impressive feat since it came out almost a decade before black metal really hit its “second wave” heyday!

1984’s In the Sign of Evil EP was Sodom’s first official release after a couple of almost unlistenably produced (and this is coming from a Paysage D’Hiver fan) demos.  And wow what a difference a “good” production made!  Just check out the atmosphere that oozes out of the first track, “Outbreak of Evil”:

The way that Sodom uses tremolo picking on this album was YEARS ahead of its time.  Just listen to the opening of “Outbreak of Evil” again: that is straight up black metal (definitely first wave, though I’d even argue for second wave) before the more NWOBHM breakdown.

Yes, this is simple stuff, most songs on this album only have two riffs, and those are only made up of a few notes each.  And songs like” Sepulchral Voice” don’t even try to transition between the two riffs:

We’ve got a verse and a chorus there that are only separated by some brief bits of silence rather than an actual transition, repeat 4 times and you’ve got a Sodom song.

Hell, Witching Metal is just 3 minutes of the same riff over and over again, foreseeing the idiot savant genius of Von by almost a decade as well:

Ok, I lied, there were 5 seconds of another riff in that clip, but the rest of the song was the same riff. Admittedly, the main riff for “Witching Metal” is quite NWOBHM (even a little punk) influenced, but the tremolo picking style in which it is played does wonders for pulling the riff into the realm of black metal, almost as much as the nihilistically minimal song construction.

Still, I don’t think it’s fair to claim that In the Sign of Evil is all that heavily influenced by NWOBHM, the songs are far too dark and atmospherically evil to ever find their way into a Saxon set.  “Blasphemer” is another great example of this:

Sure, those vocals are straight black metal (and evil as fuck), but that riff is no slouch in the 666 department either!

It’s a simple formula, but it works.  And In the Sign of Evil keeps up the intensity, the final track “Burst Command Till War” impressively manages to maintain the visceral fury of the preceding songs, a ripping, almost anthemic thrash number, that still seems rooted in black metal stylistics:

Sodom’s follow up full-length dropped most of the black metal trappings (and the excellent production) and has always been a bit of a disappointment to me.  Sure, In the Sign of Evil is laughably primitive when compared to Sodom’s later thrash masterpieces Persecution Mania and Agent Orange (to name just a few), but for a simplistic bit of proto black metal that makes Hellhammer sound like Helloween, In the Sign of Evil is almost as much fun as going to the movies!

There is absolutely no doubt that this is black metal. As far as waves are concerned, though, I feel like the cultural component is just as significant as the musical, so you can’t really call something second wave if it came out before 1991. If you were inclined to do so anyway, I’d still say “Under the Sign of the Black Mark” (1987) is the first album that had all the musical hallmarks of the coming second wave.

Well, even though this isn’t actually “second wave” black metal, one thing I love about first wave bands is looking at how similar they are to the second wave (while ignoring the parts that aren’t). This album seems quite ahead of its time, especially considering the year.

Yeah, I’ve kind of backed off my ultra-strict classification system. For a while I kind of felt like since this type of music wasn’t called black metal at the time, it would be silly to go back and give it that label after its influences were felt in the creation of actual (post 1991) black metal. I’m pretty sure I was wrong.

its about time you covered Sodom! As a Marine, I have to say that two of my favorites are “M16” and “Marine!”