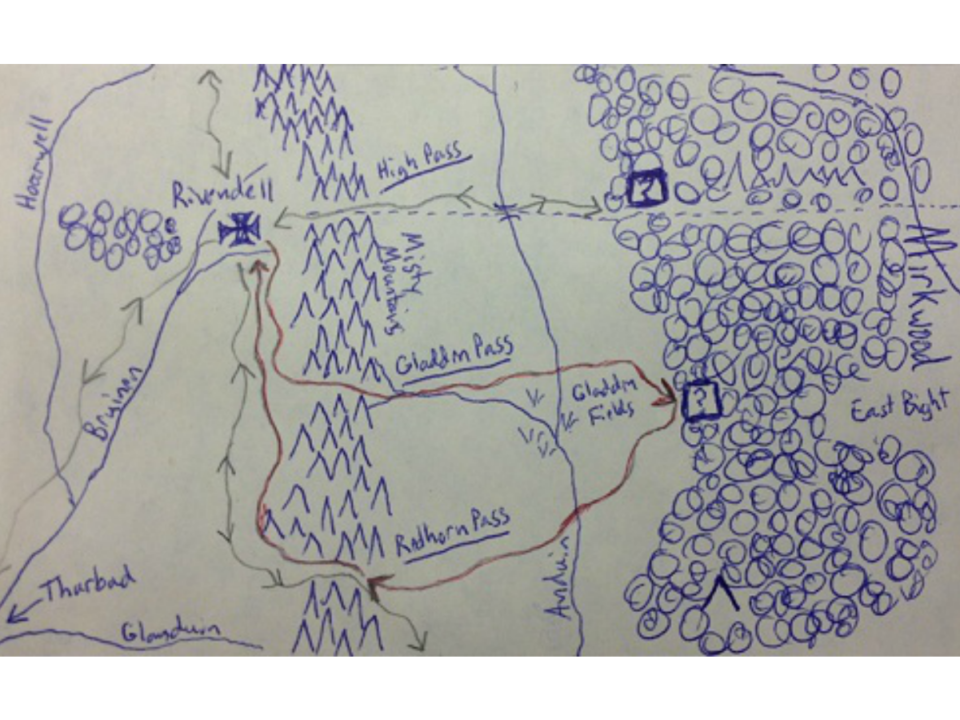 This day was bound to come.  After 33 straight months of painstakingly researched Middle-earth Monday blog posts, one of my legion of loyal fans has spotted a mistake in my calculations.  And no, we’re not just talking about my infamously spotty grasp on Sindarin spelling, this time I’ve really shat the bed.  This time, I got a location wrong, specifically the exact location of Rhosgobel, forest home of the Istar Radagast the Brown.

We all remember exactly where we were when certain life altering events happen.  The time I accidentally scraped the spine of my new set of Lord of the Rings when I too excitedly used a knife to remove the shrinkwrap?  It was in my grandma’s kitchen on Christmas Eve and I was 9 years old.  The time I realized I had given factually incorrect fictional cartographic information?  I was trying to squeeze a quick rom com in before work (the disappointing The Sweetest Thing) while working on drawing a black metal style Madonna logo.

But the quote doesn’t say the scouts came back via the High Pass (with capitals); it says they took “the high pass that was called the Dimrill Stair”, i.e., the Redhorn Pass, even further south than the Gladden Fields. So I think this does argue for a more southern location for Rhosgobel.

My friend Shena, who talked me down from my initial freak-out, helpfully made me a list of the 6 stages of nerd shame that she observed as I went through a, to borrow from Schmidt from New Girl, “Taylor Swift-like range of emotions”:

STAGE 6: Jerry Maguire – “Doug, you make me want to be a better nerd.”

She left out Stage 7: Troll Myself Via Open Letter, but otherwise, pretty accurate.  Anyway, now that I have come out of my “dark place,” let’s get down to brass tacks here.

In my original post, I attempted to finally put to rest the argument as to whether Rhosgobel was located just north of the Old Forest Road, or whether it was instead opposite the Gladden Fields in southern Mirkwood close to the “narrows” of the forest.

In all of Tolkien’s writings, there are only four pieces of evidence as to Rhosgobel’s location.  The first three are as follows:

Thus of these, the first two seem a good indication for the southern location, but the last seems to come out in favor of the northern location.
Which, left it up to the fourth piece of evidence to break the tie, namely, the details of the routes that Elrond’s scouts took before the Fellowship set out on their journey:

“The hobbits had been nearly two months in the House of Elrond, and November had gone by with the last shreds of autumn, and December was passing, when the scouts began to return. Some had gone north beyond the springs of the Hoarwell into the Ettenmoors; and others had gone west, and with the help of Aragorn and the Rangers had searched the lands far down the Greyflood, as far as Tharbad, where the old North Road crossed the river by a ruined town. Many had gone east and south; and some of these had crossed the Mountains and entered Mirkwood, while others had climbed the pass at the source of the Gladden River, and had come down into Wilderland and over the Gladden Fields and so at length had reached the old home of Radagast at Rhosgobel. Radagast was not there; and they had returned over the high pass that was called the Dimrill Stair. The sons of Elrond, Elladan and Elrohir, were the last to return; they had made a great journey, passing down the Silverlode into a strange country, but of their errand they would not speak to any save to Elrond.” [My emphasis]

Initially I took this to mean that the scouts returned Via the High Pass, and thus Rhosgobel was probably located just to the east of the High Pass.  With this as my tie-breaker, I concluded that Rhosgobel was indeed located just within the border of Mirkwood between the Old Forest Road and the Carrock (the top box with a question mark on the map).  And then Doug pointed out the Dimrill Stair section and my world turned upside down (or at least as far down as the bottom box with a question mark on the map).  I realized that the passage was not referring to THE High Pass™, but rather a high pass also known as the Redhorn Pass.

As discussed above, I quickly drew up a map of the Anduin Valley at work (what, no, Step 2 was very real), and then set to mapping out each of the five routes taken by Elrond’s scouts.  With a sinking sensation I realized that yes, Doug was indeed correct, the group of scouts that visited Rhosgobel didn’t come anywhere near the High Pass to the north (their route is labeled in red pen rather than pencil like the other four routes).

There was no way around it, I was wrong.

What can I say but, I apologize to everyone who has come to trust Middle Earth Monday as their premier source of fictional cartography.  So quick was I to ram my “High Pass™” theory down my reader’s throats that I didn’t even stop to look that the pass they were discussing was obviously the Redhorn Pass.  I let Middle Earth Monday down.  I let my readers down.  I let myself down.

I can only say that Doug, you make me want to be a better nerd.  Also, I bet NoJoy is kicking himself right now for not catching that mistake in the first place.

Finally, from this day forth, let it be known that I now consider Rhosgobel to be latitudinally located no higher than on the Western edge of the narrows of Mirkwood.  Which also suggests a reason for Rhosgobel’s abandonment considering the fell magiks issuing from Dol Guldur just to the south at the time Radagast left his home.

The thing that saddens me most about this whole fiasco is the fact that there are actual, living, breathing human beings who are even in a position to be able correct you about this stuff. NEEEERDS!

Well the correction was pretty obvious, it was right there for everyone to see in the quote, I’m surprised you missed it yourself. Also, is it really sadder than me writing two posts on the subject within 6 hours of the comment?

All I know for sure is that the whole of what we’ve all been witness to here is sadder then Kylie Minogue is epic.

Hey, I got a shout-out! 🙂 I don’t think I have managed to catch any substantive errors yet. At my advanced age, I’ve forgotten too much about Tolkien (although having had Zip disks named after the Istari, I still know their names).

I’m more of a fictional cartography spelling and grammar checker. Such as mentioning that you mean “canon” when you say “cannon”. Thrice. And that you should use the singular “Istar” instead of the plural “Istari” when talking about Radagast/Aiwendil. And encouraging Brian to use more Rs and fewer Es to spell “NERRRRDS!”

Damn, corrected all of them. Didn’t realize Istari had a singular form. And never knew Radagast’s Quenya name either 🙂

Brian, you are soooo wrong. That Kylie thing was the most amazing thing to happen on this blog (or any blog) ever.

Actually, if “the whole of what we’ve all been witness to here is sadder then Kylie Minogue is epic” then it’s not very sad at all–considering his thoughts on the epic-ness (or lack thereof) of Kylie.

As the above spelling(s) of “nerd” is undoubtedly an internet meme, Google is the final arbiter. A few searches show that multiple “E” spellings are far more common than multiple “R” spellings. I vanquish thee, pedant!

lol. The fact that you did “a few searches” and I did an exhaustive search suggests that I am the bigger nerrrrd, but you are still correct as to the collective consensus. Repeated e’s get hits up to Google’s search term length limit N125rd, while repeated r’s only get consecutive results up to Ne77d. Repeated e’s also get the largest spike, at 43,400 hits for N11rd, although there was a nice spike of 26,500 hits for Ne34d. I still encourage you to switch. 🙂