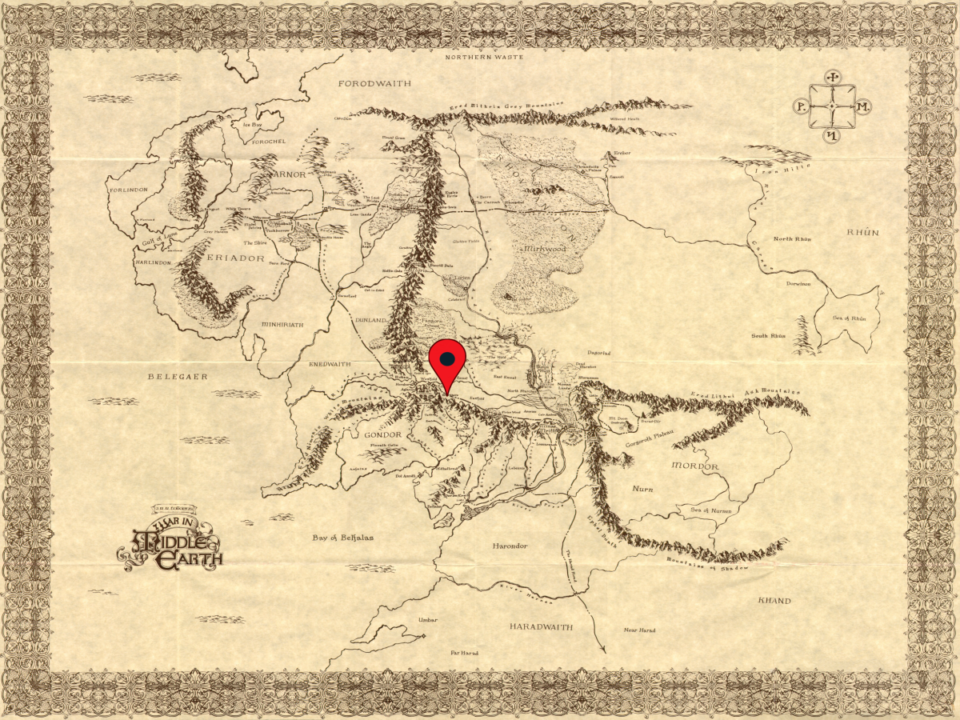 This month I discuss the oldest settlement in Rohan.

The people of that region had become few since the Plague, and most of those that remained had been slaughtered by the savage Easterlings. Cirion, therefore, in reward for his aid, gave Calenardhon between Anduin and Isen to Eorl and his people; and they sent north for their wives and children and their goods and sealed in that land. They named it anew the Mark of the Riders, and they called themselves the Eorlingas; but in Gondor their land was called Rohan, and its people the Rohirrim (that is, the Horse-lords).

Thus Eorl became the first King of the Mark, and he chose for his dwelling a green hill before the feet of the White Mountains that were the southwall of his land. There the Rohirrim lived afterwards as free men under their own kings and laws, but in perpetual alliance with Gondor.

Before Brego built Edoras, Rohan’s capital and first city was Aldburg.  Built by Eorl the Young atop a hill, as the Rohirrim were wont to do, this small city was well-fortified and could see far into the Mark from its high seat upon the foothills of the White Mountains.  And though the center of government moved some 10 leagues to the northwest in the ensuing years, Aldburg remained an important fortification on the Rohirric frontier.  Located in the middle of the Folde (the land that separated the kingdom between the the East and West Marks) Aldburg was never taken through many years of warfare.

At the time of the War of the Ring, Aldburg was home to Eomer, son of the Theoden.  It was from Aldburg that Eomer gathered his Eothed in defiance of Grima, and it was to Aldburg that Eomer gifted Elfhelm marshalship of the East-Mark in the aftermath of the war.  Rohan was a land many settlements, but none had foundation stones as old as Aldburg, first of the hill forts, ancestral seat of the Rohirric Noblemen.

Very timely. I just re-read the Unfinished Tales version of the story of Cirion and Eorl last week. Trudging my way through The Lays of Beleriand now. Not such a big fan of the alliterative or rhyming verse.