Middle-earth Monday 64: The Desert of Lostladen 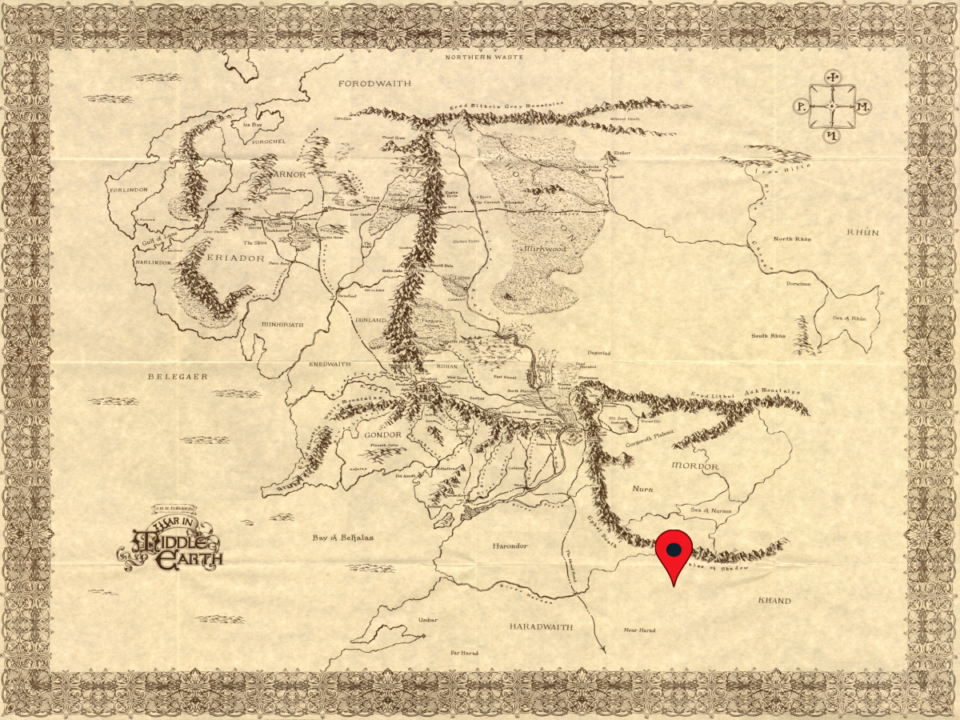 This month I discuss a desert of Near Harad that reached all the way to the foot of the Mountains of Shadow:

Hard fighting and long labour they had still; for the Southrons were bold men and grim, and fierce in despair; and the Easterlings were strong and war-hardened and asked for no quarter. And so in this place and that, by burned homestead or barn, upon hillock or mound, under wall or on field, still they gathered and rallied and fought until the day wore away.

Then the Sun went at last behind Mindolluin and filled all the sky with a great burning, so that the hills and the mountains were dyed as with blood; fire glowed in the River, and the grass of the Pelennor lay red in the nightfall. And in that hour the great Battle of the field of Gondor was over; and not one living foe was left within the circuit of the Rammas. All were slain save those who fled to die, or to drown in the red foam of the River. Few ever came eastward to Morgul or Mordor; and to the land of the Haradrim came only a tale from far off: a rumour of the wrath and terror of Gondor.

Harad was a harsh land of blasted rocks and endless sand dunes that only grew more inhospitable the further south one traveled within it before finally giving way to plains and tropical forests at its southernmost borders.  And, while occasional green things did bloom in the shade between the boulders in northern Harad, one desert, known as the desert of Lothladen stretched so far north that its sands spilled up into the dark slopes of the Ephel Duath themselves.

The desert covered a huge area, from the shores of the Harnen and then well into the western sections of Khand.  Rolling sand dunes stretched out as far as the eye could see, the only life in that forsaken desert staying hidden in the sands during the blisteringly hot days.  Not only did it create a natural barrier between Harad and Khan, it also discouraged anyone attempting to simply walk into Mordor via the secret Nargil Pass.

Little else is known of this vast desert of Near Harad.  Haradrim and Variags alike knew that they entered such a land at their own peril, while any other wanderers who ventured into lands where the stars were strange took one look at the waterless expanse spreading out before them into the horizon and quickly turned away.