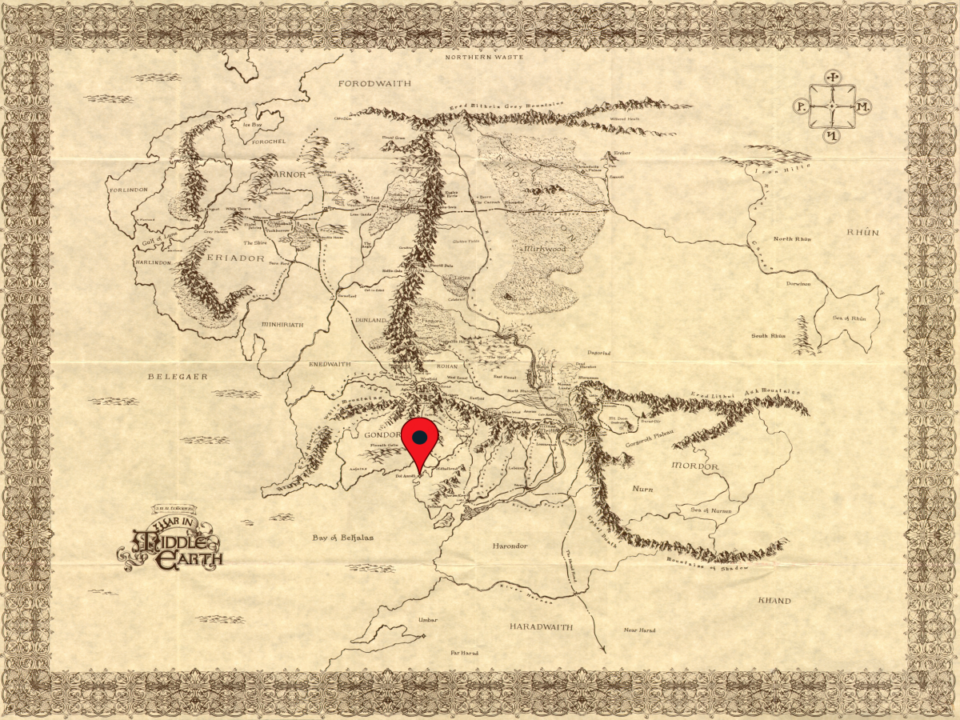 Welcome back to everyone’s favorite www.isleyunruh.com Monday feature! Middle-earth being the place of enchantment and wonder that it is, each month I will use my love of fictional cartography to transport you to another time and place. So why not take a moment to fill your head full of knowledge that will have no bearing at all on the real world? This month I’ll be discussing Gondor’s third largest city, seat of the principality of Dol Amroth.

The Man in the Moon had silver shoon,
and his beard was of silver thread;
With opals crowned and pearls all bound
about his girdlestead,
In his mantle grey he walked one day
across a shining floor,
And with crystal key in secrecy
he opened an ivory door.

On a filigree stair of glimmering hair
then lightly down he went,
And merry was he at last to be free
on a mad adventure bent.
In diamonds white he had lost delight;
he was tired of his minaret
Of tall moonstone that towered alone
on a lunar mountain set.

He would dare any peril for ruby and beryl
to broider his pale attire,
For new diadems of lustrous gems,
emerald and sapphire.
He was lonely too with nothing to do
but stare at the world of gold
And heark to the hum that would distantly come
as gaily round it rolled.

At plenilune in his argent moon
in his heart he longed for Fire:
Not the limpid lights of wan selenites;
for red was his desire,
For crimson and rose and ember-glows,
for flame with burning tongue,
For the scarlet skies in a swift sunrise
when a stormy day is young.

He’d have seas of blues, and the living hues
of forest green and fen;
And he yearned for the mirth of the populous earth
and the sanguine blood of men.
He coveted song, and laughter long,
and viands hot, and wine,
Eating pearly cakes of light snowflakes
and drinking thin moonshine.

He twinkled his feet, as he thought of the meat,
of pepper, and punch galore;
And he tripped unaware on his slanting stair,
and like a meteor,
A star in flight, ere Yule one night
flickering down he fell
From his laddery path to a foaming bath
in the windy Bay of Bel.

He began to think, lest he melt and sink,
what in the moon to do,
When a fisherman’s boat found him far afloat
to the amazement of the crew,
Caught in their net all shimmering wet
in a phosphorescent sheen
Of bluey whites and opal lights
and delicate liquid green.

Against his wish with the morning fish
they packed him back to land:
‘You had best get a bed in an inn,’ they said;
‘the town is near at hand’.
Only the knell of one slow bell
high in the Seaward Tower
Announced the news of his moonsick cruise
at that unseemly hour.

Not a hearth was laid, not a breakfast made,
and dawn was cold and damp.
There were ashes for fire, and for grass the mire,
for the sun a smoking lamp
In a dim back-street. Not a man did he meet,
no voice was raised in song;
There were snores instead, for all folk were abed
and still would slumber long.

He knocked as he passed on doors locked fast,
and called and cried in vain,
Till he came to an inn that had light within,
and he tapped at a window-pane.
A drowsy cook gave a surly look,
and ‘What do you want?’ said he.
‘I want fire and gold and songs of old
and red wine flowing free!’

‘You won’t get them here,’ said the cook with a leer,
‘but you may come inside.
Silver I lack and silk to my back –
maybe I’ll let you bide.’
A silver gift the latch to lift,
a pearl to pass the door;
For a seat by the cook in the ingle-nook
it cost him twenty more.

For hunger or drouth naught passed his mouth
till he gave both crown and cloak;
And all that he got, in an earthen pot
broken and black with smoke,
Was porridge cold and two days old
to eat with a wooden spoon.
For puddings of Yule with plums, poor fool,
he arrived so much too soon:
An unwary guest on a lunatic quest
from the Mountains of the Moon.

Though the Red Book of Westmarch does not take us to the great city of Dol Amroth during the time of the War of the Ring, it was both old and famous enough to be the setting of  Sam Gamgee’s poem about the night the Man in the Moon came down from his silver palace.  And though the Man in the Moon was greatly disappointed by his visit, those of baser means were sure to have been considerably more impressed by the second largest city in Gondor with its shining towers topped with their famous standard of a silver swanship upon a blue background.

Dol Amroth was founded at the end of the Second Age, when, in the aftermath of the destruction of Numenor, the various colonies along the coast of Belfalast coalesced into more permanent settlements.   Dol Amroth was the largest city in the lands south of the Elvish haven of Edhellond (third largest in Gondor after Minas Tirith and Pelargir).  It was located on the southern shores of the Cobas Haven where the dark waters of the river Morthond flowed before entering the Bay of Belfalas proper.

The city had grown up around around the solitary hill of Amroth (as is obvious from the name “Dol” Amroth) in the early years of the Third Age.  The hill (and thus the city itself) was given the name Dol Amroth in honor of the elf prince Amroth after his tragic death in the Bay of Belfalas in T.A. 1981.

Dol Amroth was a principality, and its line of princes governed from their castle which sat at the top of the great hill.  Because the city was situated upon a peninsula, the narrow land bridge was easily defended.  Thus, the bulk of the city’s defenses were devoted towards the sea.  Great sea walls and the sea-ward tower of Tirith Aear were constructed to ensure no enemy could land forces by sea into the fertile lands south of the white mountains.

Many claim that the line of princes of Dol Amroth began with Galador (born, T.A. 2004, died, T.A. 2129), son of Imrazór the Númenórean, and the Elven-lady Mithrellas.  Much was made of this elvish blood that started the line of princes of Dol Amroth.  However, the line actually went back more than 2000 years before Galador, and it was not until Galador that the title “prince of Dol Amroth” was added to the line.  There has been much confusion as to the exact date of the naming of the city as historians sometimes erroneously attributed the title  “Lord of Dol Amroth” to prince Adrahil as early as 1944 (the time of the Wainrider invasions).

Whatever their origins, the line of princes was well entrenched in the region through both marriage and blood by the time of the War of the Ring.  And well it was, for without Prince Imrahil’s large company of highly trained swan knights (along with 700 men at arms), the city might well have fallen before King Theoden’s last ride could have reached the city.  And in the aftermath of the War of the Ring the line of princes of Dol Amroth continued to govern the lands of Dor-en-ernil (the lands of the prince) as King Ellesar remembered well the courage of the soldiers from the shining city of Dol Amroth.