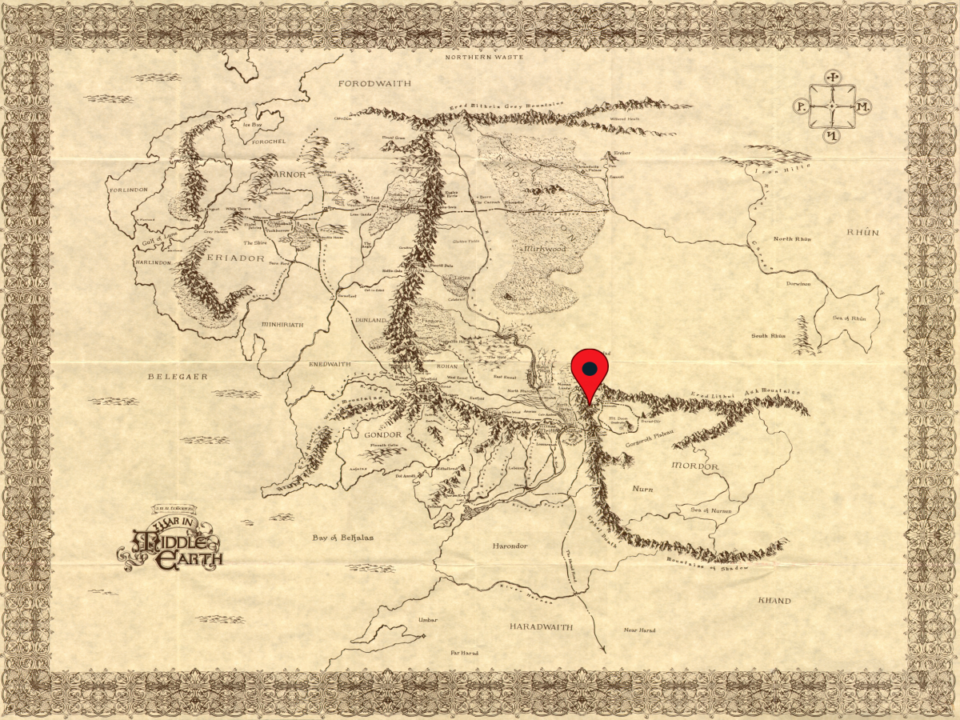 This month I’ll be discussing the orc fortress of Durthang, hidden high in the Mountains of Shadow.

A few miles north, high up in the angle where the western spur branched away from the main range, stood the old castle of Durthang, now one of the many orc-holds that clustered about the dale of Udûn. A road, already visible in the growing light, came winding down from it, until only a mile or two from where the hobbits lay it turned east and ran along a shelf cut in the side of the spur, and so went down into the plain, and on to the Isenmouthe.

Mordor had five named towers, the first four of which were: Carchost and Narchost (the towers of the teeth that guarded the Haunted Pass), the tower of Cirith Ungol (that watched over the pass of Cirith Ungol), and Barad Dur (the mighty black fortress of Sauron himself). The fifth, the castle of Durthang, is less well known, for it was hidden high up in a crook of the Ephel Dúath.

Though Barad-dûr was built by Sauron himself (with the power of the one ring), Carchost, Narchost and Cirith Ungol were all built by the men of Gondor in the aftermath of the defeat of Sauron by the Last Alliance of Men and Elves in the Second Age.  These three towers were built upon the only two methods of ingress to the land of Mordor (not counting the southern Nargil Pass, or, the possibility of simply walking into Mordor from the East).

The castle of Durthang had more mysterious origins.  Located as it was high up in the crook of a northern arm of the Mountains of Shadow, it served little strategic purpose for Gondor, indeed, it would have been rather useless for a nation attempting to monitor even the interior of Mordor tucked away as it was.  It would have served more of a Helm’s Deep sort of purpose, an impregnable stronghold from which the soldiers of the enemy might mount a last ditch defense.  Thus it is doubtful that it too was constructed by Gondor.

It was also an old castle, perhaps even older than Barad-dûr.  Perhaps it was the original abode of Sauron, before he abandoned it to begin work on Barad-dûr.  Whatever it’s origins, by the time of the war of the ring, it had acquired one of the most evil reputations of all the strongholds in Mordor.  Literally named the Castle of “Dark Oppression,” its slave pits help the most vile of orcs, subjected to dark tortures and darker magics as they waited for the time when the Dark Lord would loose them upon Middle Earth.

Though it remained standing after the Last Alliance of Men and Elves, in the aftermath of the War of the Ring Durthang was most assuredly destroyed.  No orc-hold of such and evil reputation would have been allowed to remain standing after the fall of Sauron’s realm of terror.

Re: “simply walking into Mordor”, lol. I didn’t notice that joke on the Nargil Pass post when I read it the first time.

Heh, it’s like Boromir has never looked at a map.

I don’t know, with a little paint and new floors, Durthang could have made a great starter fortress!