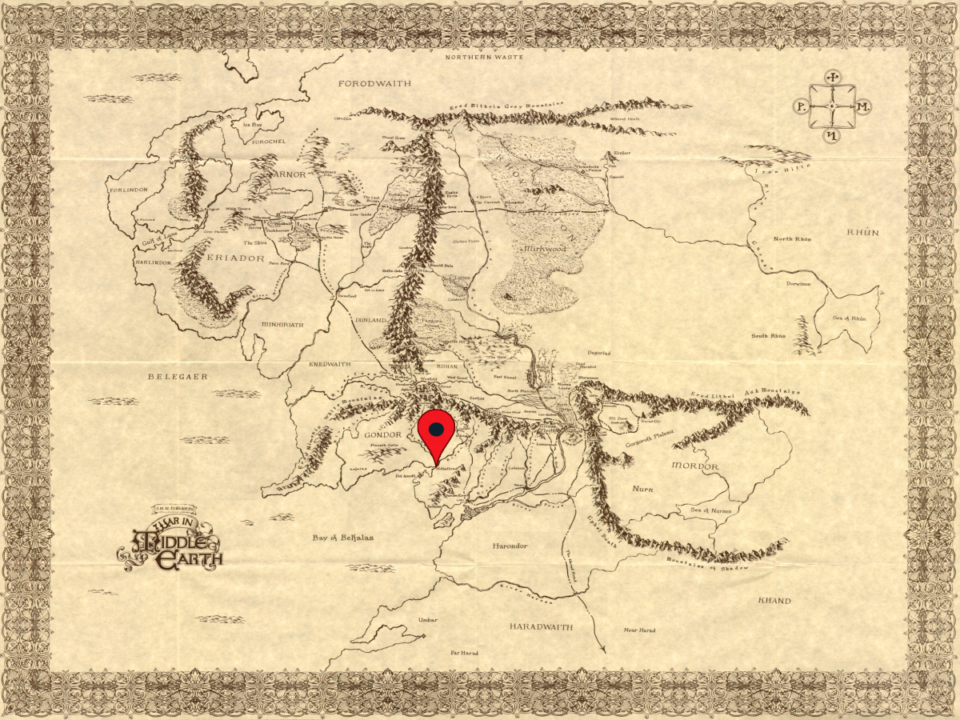 This month I’ll be discussing the abandoned Elvish haven of Edhellond upon the shores of the Bay of Belfalas.

Amroth beheld the fading shore
Now low beyond the swell,
And cursed the faithless ship that bore
Him far from Nimrodel.

Of old he was an Elven-king,
A lord of tree and glen,
When golden were the boughs in spring
In fair Lothlorien.

From helm to sea they saw him leap,
As arrow from the string,
And dive into the water deep,
As mew upon the wing.

The wind was in his flowing hair,
The foam about him shone;
Afar they saw him strong and fair
Go riding like a swan.

But from the West has come no word,
And on the Hither Shore
No tidings Elven-folk have heard
Of Amroth evermore.

In the waning years of the Third Age of the Sun, the elvish population upon Middle Earth had dwindled to but a small part of its former numbers.  The immortal elves longed to travel the straight road to the undying lands of Aman and had been leaving Arda in greater and greater numbers.  It was from Mithrond, the Grey Havens where dwelt Cirdan the shipwright that the white ship bearing the ringbearers, Gandalf, Elrond and Galadrial departed at the end of the Third Age.  However, Mithrond was not always the sole elf haven with access to the straight road.  Far to the south, the elf haven of Edhellond (literally “elf-haven”: from the Sindarin edhel = “Elf” and lond = “harbor, haven”) also regularly sent ships on the straight road to the undying lands.

Accounts differ as to the actual date of Edhellond’s founding.  Some say it was founded as early as the First Age by elves fleeing Morgoth’s destruction of the havens of Brithombar and Eglarest in 473. More likely, considering the altered shape of the world in the aftermath of the drowning of Beleriand at the end of the First Age, the founders of Edhellond came from the Grey Havens after learning the shipbuilding craft from Cirdan around the year 40 SA.

The haven was located at the juncture of the rivers Morthrond (Gondor’s second largest river–also known as the Blackroot because of its origins in the waterfalls of the Blackroot Vale at the entrance to the Paths of the Dead) and Ringló as they flowed into the Cobas Haven in the Bay of Belfalas.  Though Edhellond was in ruins by the time of the War of the Ring and little is known of its actual layout, it was the only elven harbor and settlement in southern Middle Earth for the first half of the Third Age.

However, by the time of the Balrog’s awakening in Moria in TA 1981, a great many elves migrated southwards to return to Valinor.  Of this migration, the last ship to leave Edhellond was to have held Amroth, prince of Lorien and the remaining elves of the haven.  However, Amroth refused to leave until his lover Nimrodel joined him.  Sadly she had become lost in the wilderness on her journey to Edhellond, and as Amroth waited, a great storm came up and swept the elven fleet out to sea.  Thus, as in the crude Westron translation of the poem that opened this post recounts, Amroth leapt into the bay and attempted to swim back to shore.  He never made it and it is said that one can still hear his cries for his lost lover when the wind is from the south (just one can still hear Nimrodel’s searching cries when the wind is from the north).

Despite the sorrow of the last ship’s departure, the elven population of middle earth was lessened to the point that it no longer needed two havens upon the sea, and Edhellond was thus abandoned to crumble with the passing years.  Mithrellas, one of Nimrodel’s lost company went on to marry Imrazor and it was one of their offspring, Galador, who went on to found the Gondoran city of Dol Amroth a mere 50 miles to the south of the abandoned elf haven.  But that is a story for another day…

I love you, Edhellond, although this story was told better by Snake Pliskin in “Overboard.”