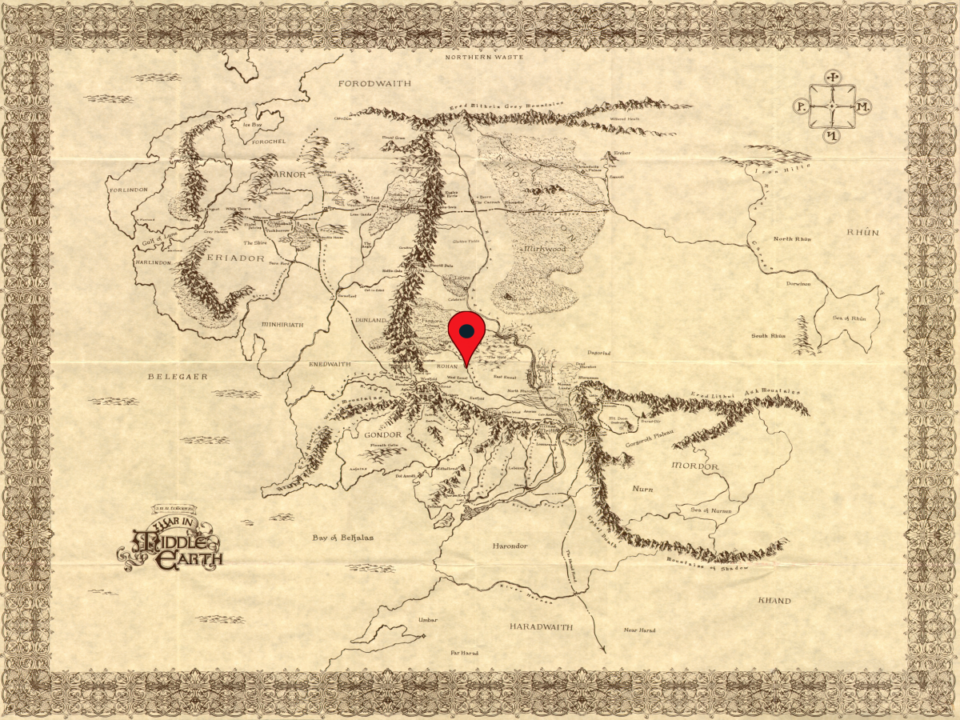 This month I discuss the only crossing of the Entwash in all of Rohan.

The Lord of Morgul therefore led his companions over Anduin, unclad and unmounted, and invisible to eyes, and yet a terror to all living things that they passed near. It was, maybe, on the first day of July that they went forth. They passed slowly and in stealth, through Anórien, and over the Entwade, and so into the Wold, and rumour of darkness and a dread of men knew not what went before them. They reached the westshores of Anduin a little north of Sarn Gebir, as they had trysted; and there received horses and raiment that were secretly ferried over the River. This was (it is thought) about the seventeenth of July. Then they passed northward seeking for the Shire, the land of the Halflings.

Of the mighty rivers of Middle-earth, the sheer volume of water carried by the Entwash is often forgotten.  It supplied the vast Wetwang with enough water to both make a 2500 square mile area of land into an impassible swamp as well as almost double the size of the already mighty Anduin.

So wide was the Entwash as it flowed out of Fangorn for some 300 miles through Rohan (splitting the realm into the West Emnet and the East Emnet), that there was only one shallows, about midway through The Mark (some 50 miles northeast of Edoras) where the river flowed wide enough to allow a fording (and even that was treacherous at all but the driest times of the year).  This natural choke point afforded Rohan an excellent fall back means of defense should any invaders venture that far in to their realm, for the only other option was to venture far to the north where another set of shallows lay about Fangorn forest, or to attempt to brave a crossing of the Nindalf.

In fact, the clearest indication that the Entwade was the only crossing north of the mouths of the Entwash was the fact that the Nazgul had crossed the Entwash via the Entwade on their way north to seek the hobbits.  Considering their journey north began on the west side of the Anduin after taking Osgiliath, the fact that they had to travel all the way to the Entwade was a detour of some 250 miles.  A detour made on foot, which, even for the tireless Nazgul slowed them down quite considerably.

Just imagine how much precious time was lost as they searched for hobbits in the Anduin Vales before returning south to seek the Shire on the other side of the Misty Mountains!  It could have led to a very different the outcome for Frodo and his companions had there been a lower crossing of the Entwash!

Can you clarify what route they would have taken if not for the detour?

And I think you mean “mighty rivers” instead of “might rivers”.

Yeah, in a shocking turn of events, this Monday post was once again a bit rushed!

And honestly, the route of the Nazgul (found in the Unfinished Tales) doesn’t make much sense. It seems the Witch King and his six companions were basically trying to go North to meet up with Khamul the Easterling and company at Dol Guldor to search the Anduin Vales for the hobbits, and, after not finding them there, they returned south and came up the other side of the Misty Mountains.

The problem here, is, if I were a Nazgul intent on travelling from Mordor to Dol Guldur, it would make no sense to cross the Anduin, travel all through Anorien, up the Entwash just to cross it at its only crossing and then head back east to cross the Anduin again just north of the Sarn Gebir (I’m assuming at the Undeeps). Even factoring in the need to skirt the Dead Marshes and Emyn Muil, travelling straight north from Minas Morgul would still be a shorter route. Additionally, since Sauron was still concerned with secrecy, the eastern route would not take his minions straight into the heart of enemy territory.

I would have added this to the post, but logical inconsistencies in Tolkien’s work add to neither the enchantment nor wonder of Middle-earth. I did at least change the “detour” wording so it doesn’t sound like they had much of a choice.